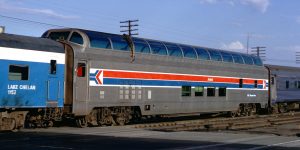 A train horn quiet zone begane Tuesday, Nov. 20, at three crossings within the city of Bloomington. (Photo courtesy of Amtrak)

Ameren gets OK from regulators for $21 million project

The Illinois Commerce Commission has given utility provider Ameren Illinois the green light to proceed with a $21 million transmission line project that will encompass McLean County.

Plans call for the new 10-mile line running west of Hudson to a substation in Normal at Hershey and Raab roads.

With that state’s approval in place, Ameren representatives have indicated plans of beginning the project in 2019 and completing it in 2020.

Three nonprofit organizations are reaping the harvest of a 930-acre sale of farmland that was recently put up for auction in portions of Allin, Dale and Dry Grove townships.

The 12-tract farmland has been in family ownership for generations. The most recent heir, Cyril Frevert, died in 2017, and there reportedly are no further family members to pass the land down. The auction reportedly yielded $3 million to $4 million in proceeds.

Funds will go toward Home Sweet Home Mission, Illinois Wesleyan University and the McLean County chapter of the Salvation Army.

YWCA McLean County was recently named a recipient of a 2018 Second Chance Act grant, in the amount of $798,846, from the U.S. Department of Justice.

According to YWCA representatives, the infusion of funds will go toward a series of initiatives, including programs to reduce recidivism rates among women, increasing public safety efforts and reducing crime.

Art Circle of Bloomington-Normal members will showcase their work in the coming weeks at Broadview Mansion, 1301 S. Fell Ave., Normal.

More than 20 pieces of artwork will be displayed in this year’s exhibition, which is an annual event during the holidays. The organization’s upcoming program kicks off with an opening reception from 6 to 8:15 p.m. Wednesday, Dec. 5.

Festivities during the opening day event include a Christmas Open House, held in conjunction with the Immanuel Bible Foundation, in addition to music, mansion tours and refreshments. Additional showings will take place through Thursday, Dec. 20. For information, visit www.artcirclebn.com.

A train horn quiet zone at three public railroad crossing began Tuesday, Nov. 20, at three crossings within the city of Bloomington: Miller Street, Six Points Road and Washington Street. The crossings area part of the Union Pacific and Amtrak line, which runs north and south through Bloomington and Normal.

In a quiet zone, train operators will no longer routinely sound a horn. However, there are exceptions, and horns could still be sounded if a vehicle or pedestrian is present on the tracks, if a pedestrian is near the train cross, if there is construction on the tracks or if an emergency situation is occurring.

The Bloomington City Council is in the midst of weighing a proposal from the Police Department on the allocation of municipal funding for body cameras for sworn officers on the local force. BPD officers been using the recording devices on a trial basis most of this year, but the free pilot period is about to come to a close. The council is slated to take action on BPD’s funding request at its next regular meeting on Monday, Nov. 26.

Regular household garbage and recycling will be collected in the town of Normal on Thanksgiving Day, Thursday, Nov. 22, and the day after, as usual.

The holiday, however, will alter collection of all other items, including bulk waste, landscape waste, leaves and brush. The items will be collected the following week.

As is always the case, town officials are asking residents to place garbage and recycling carts at the curb after 6 p.m. on the day before the regular collection day and no later than 6 a.m. on the day of collection.

The municipal board overseeing Normal Township has set in motion a series of changes at its Activity and Recreation Center, 600 E. Willow St., following a meeting Thursday, Nov. 15.

The center, geared primarily toward seniors, will undergo several upgrades, including improvements to the existing heating, ventilation and air conditioning system and a plan to complete unfinished spaces within the facility.