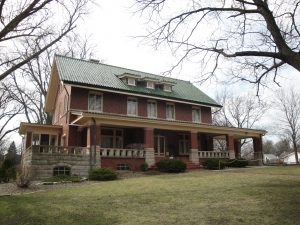 Broadview Mansion 1301 S Fell Ave., Normal, is a local historic landmark. It is a popular center for weddings and other such special events.

From a unique gas station along the pioneering Route 66 highway to a venue that once housed ill children of servicemen, town of Normal’s decision-makers have forged a history of preserving artifacts from the community’s earliest years.

While town officials are delighted to step up to the plate and offer assistance in ensuring the area’s history remains vibrant, City Administrator Mark Peterson said another guiding force typically has a hand in determining whether municipal assistance is given.

The town’s investments into Sprague’s service station and the Illinois Soldiers’ and Sailors’ Children’s School infirmary fit hand-in-glove into the goal of seeking out new economic development opportunities.

Sprague’s holds the distinction of being one of the few two-story gas stations still in existence. The town offered assistance by purchasing the site and finishing an extensive remodeling project within the facility, which has roots going back to 1931.

Sprague’s has reopened as a gift shop at a time when interest in the decommissioned Route 66 stretch from Chicago to Santa Monica, Calif., has reawakened. The fact the nation’s first federal highway runs through McLean County has oftentimes been seen as a tourism draw.

Although specific numbers have not yet been revealed, preliminary data from the Bloomington-Normal Area Convention and Visitors Bureau, McLean County Museum of History and other related organizations has revealed interest has peaked since Sprague’s reopened to the public this summer.

Peterson said visitors from 18 countries and 30 states across the country have reported visiting Sprague’s amid Route 66 tourism pursuits this warm-weathered season.

“These are visits that can help generate overnight stays in our community, so the impact is huge,” Peterson said. “We’re pleased (Sprague’s) has been restored, but the overall impetus was the economic development part.”

While portions of the campus of buildings that once housed the Illinois Soldier’s and Sailor’s Children’s School have been razed due to dilapidation, the infirmary has been restored with potential plans of an art studio on the horizon.

Peterson said the town has been open to how the infirmary will be reused in the future. 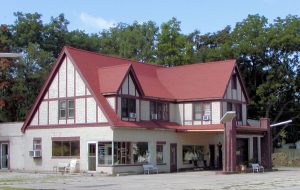 Sprague’s service station along Route 66 in Normal.  The station originally opened in 1931 and was recently renovated.

“Our interest is in making sure the facility is restored to the original architecture,” he said. “We want it to be something people can enjoy for its historic significance.”

Restoration of the infirmary is part of a multi-tiered effort aimed at bringing in new development to the site that will intermingle with the infirmary’s historic character.

“There’s a lot of things happening there, and we think we’re heading in the right direction,” Peterson said. “But, again, it’s about that opportunity for future development.”

The town’s recent forays into preserving historic buildings stretched back several years ago, when the future of the Broadview Mansion came into question.

The Immanuel Bible Foundation, which owns the site, had considered selling the building and grounds because of the exorbitant maintenance costs for the mansion, which was built in 1906. But the town struck up a deal to partner with the day-to-day maintenance costs.

“It has been a wonderful agreement,” Peterson said. “It’s turned out to be a neat opportunity to partner (with Immanuel Bible Foundation) and maintain another piece of our heritage.”

Peterson added, “This is the kind of creativity, partnership and innovation that we look to do so the public can enjoy our history for years to come.”

For all of the town’s overtures toward preserving history, there are times Peterson said the mix of scenarios do not align.

Case in point: This summer, Peterson approached the Town Council with another possible preservation effort at the one-time site of the McLean County Tuberculosis Sanatorium, 905 N. Main St.

The former sanatorium is now known as the county-owned Fairview Building and is in a state of deterioration. It could face the wrecking ball in the near future. The land, while still in the county’s holding, is not in use for anything more than storage at the moment.

When the town learned the county was planning to raze Fairview, Peterson said he had preliminary talks of acquiring the site, possibly to house a municipal department. The town-owned Fairview Family Aquatic Center is adjacent to the site.

“Although there was interest very early on, it does not seem the town will pursue it,” Peterson said. “There’s quite a bit of work that will be needed there, and we do not necessarily need all of the space in that building.”