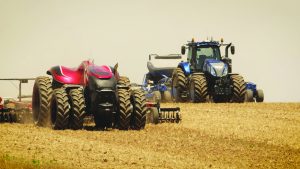 Driverless tractors and farm equipment are part of the future of agriculture and the McLean County Regional Planning Commission said local farmers are becoming open to that idea. (Photo courtesy of CNH Industrial)

While self-driving cars and other forms of artificial intelligence are still off on the horizon, a McLean County organization is in the midst of exploring what could lie ahead in the area of transportation for Bloomington, Normal and other communities.

Autonomous vehicles will be the overarching topic at the McLean County Regional Planning Commission’s upcoming Community Information Forum, which will occur next month.

The organization will host a talk with Carla Bailo, president and CEO of Ann Arbor, Mich.-based Center for Automated Research. According to her biography, Bailo’s areas of expertise include the oncoming deployment of autonomous vehicles.

Self-driving technology has been grabbing headlines this past year and has been piloted in a few larger cities within the U.S.

“There’s quite a bit of buzz around this topic right now,” Alyssa Cooper, community planner with the local regional planning commission, said in an interview with the Chronicle. “It hasn’t quite reached municipalities of our size yet.”

While autonomous vehicles might reach Bloomington, Normal and other McLean County communities after larger ones, Cooper said the commission’s goal is to begin exploring options now, rather than later.

“Our goal is to get ahead of this,” she said. “Our thought is, ‘Let’s at least start looking at it.” 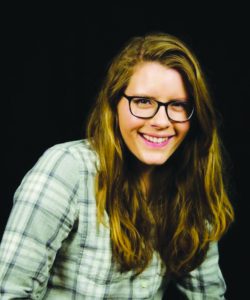 In addition to innovation, legislation at the federal, state and local levels will play a role in determining when the technology actually will reach the marketplace.

Although autonomous vehicles are most commonly associated with driverless cars, Cooper said there are other applications as well — some that will directly be beneficial to McLean County farmers.

Driverless tractors are among some of the possibilities that are already being tested, Cooper said, and will likely have a very direct impact on the county as the technology continues to mature.

“That sort of technology is going to apply to our county,” Cooper said. “From what I hear, (farmers) are pretty open to it.”

The upcoming Community Information Forum is the 14th such event the regional planning commission is holding.

In more recent years, Cooper said topics explored within the forums have revolved around the umbrella topic of smart cities.

“There’s sort of a lot that goes with that term,” Cooper said. “But it’s about new and emerging technologies and what local governments can do with them.”

At its most basic level, communities falling into the realm of a smart city typically use data and communication technologies to enhance the quality and performance of such existing urban services as transportation, energy and utilities.

In addition to discussing autonomous vehicles, Cooper said Bailo will delve into the concept of multimodality — a term coined to explore the ways multiple modes of transportation can operate seamlessly and simultaneously.

The upcoming talk, Cooper said, fits into a bigger picture for the commission as long-range planning efforts progress.

“A couple of years back, our board decided to do a theme with these,” Cooper said of the annual information forums.

Other recent forums have touched on such topics as, “21st Century Communities for the 21st Century Citizen” in 2018, “Secrets of Successful Communities” in 2017 and “Innovative Districts: An Entrepreneurial and Educational Partnership” in 2016.