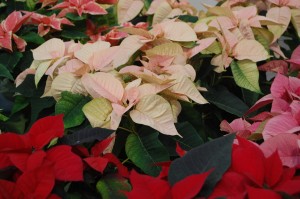 The poinsettia, a traditional symbol of Christmas celebrations, was first introduced to the United States in the late 1800s by Joseph Poinsett, U.S. ambassador to Mexico. (Photo courtesy of U of I Extension Offices)

Evergreen trees, poinsettias, and mistletoe – plants are an important part of many winter traditions. However sometimes origins of the traditions are not always clear.

The winter holiday season would be incomplete without the bright red of poinsettias. Joseph Poinsett, U.S. ambassador to Mexico in the late 1800’s, was responsible for sending the poinsettia to the United States. He admired the plant’s beautiful red bracts appearing naturally during the Advent season in the hills of Mexico. What a coincidence he would find a plant with the same name as his. Actually, it was called the nativity plant by the missionaries in Mexico.

The Egyptians, Romans and Druids all used decorated trees in winter celebrations long before the beginnings of Christianity. Egyptians in celebrating the winter solstice brought green date palms into their homes as a symbol of “life triumphant over death.” The winter solstice, Dec. 21, has the shortest daylight of the year. After Dec. 21 daylight increases. Sounds like something to celebrate to me.

But most historians agree that the use of an evergreen tree as part of the Christian Christmas celebrations started about 400 years ago in Germany. There is a legend that one Christmas Eve Martin Luther was journeying through the pine forest. He was inspired by the sight of thousands of stars twinkling through the branches of the trees.

Hessian mercenaries brought the custom to the U.S. during the American revolution. Here in Illinois the first Christmas trees were set up in 1804. Soldiers at Fort Dearborn – what we now call Chicago – hauled trees from surrounding woods to their barracks during Christmas.

Mistletoe is the common name of several semiparasitic plants of Europe, North America and China. American mistletoe grows mainly through the southern states on a wide variety of trees. As a holiday decoration, mistletoe is one of the oldest in common use.

Mistletoe was widely used centuries before Christ as a religious symbol in pagan rituals. The ancient Druids of Britain regarded mistletoe as sacred and believed it had both magical powers and medicinal properties. They referred to it as the “heal all,” although now we know the berries can be poisonous. Mistletoe was so sacred to the Druids that if two enemies met beneath a tree on which mistletoe was growing, they would lay down their weapons, exchange greetings and observe a 24-hour truce.

Due to its widespread use in pagan rituals, mistletoe was not allowed in Christian churches during the early days of Christianity. Just how mistletoe entered the Christian holidays is unclear. Perhaps it was due to the long held belief that it was a “heal all” plant – symbolic of Christ the divine healer.

The present day custom of hanging mistletoe over doorways probably came from the Druids’ tradition of laying down arms. However, it may also reflect a Scandinavian tradition.

The Scandinavians tell that Balder, the god of Peace, was slain with an arrow made of mistletoe. The other gods and goddesses became quite saddened by this and asked that Balder’s life be restored. When he did return to life, mistletoe was given to the goddess of love who decreed that anyone who passed under the plant receive a kiss to show that mistletoe was a symbol of love.

Until the 20th century the herb rosemary was a very popular Christmas plant, along with holly and mistletoe. Why rosemary fell out of favor as a Christmas plant is a mystery. But the plant is making a comeback in wreaths and topiaries. An offering of rosemary signifies love and remembrance. And a sprig in your stew is quite tasty too.

Sandra Mason is a horticulture educator at the University of Illinois Extension . She can be reached at slmason@illinois.edu

— The origins of plants in holiday  traditions —