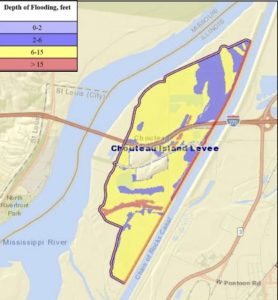 Metro East water users are no longer under a conservation order, but the breach of a Mississippi River levee that damaged a critical water intake facility last week has focused new attention on the importance of small publicly- and privately-owned flood protection structures across the American Bottoms.

However, the Chouteau Island Levee is locally owned and maintained, and was therefore not included in the renovation effort.

With sandbagging to shore-up low spots, the levee can protect the island against Mississippi River waters up to 40 feet — considered major flood stage for the area, Marks said. The river crested at 41.33 feet at St. Louis last week.

However, the district’s declining tax base has rendered substantial updates to the levee infeasible, Marks said.

The levee is inspected by the U.S. Army Corps of Engineers, Marks reassured — a fact confirmed by the National Levee DataBase, maintained by the Corps and Federal Emergency Management Agency (FEMA).

However, the district receives no funding from the federal government or Madison County, Marks said. 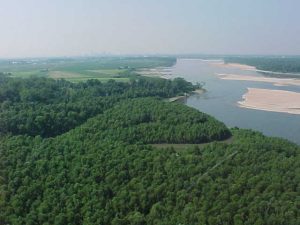 Chouteau Island was once home to between 35 and 50 families, virtually all of whom moved after the flood of 1993, he explains. The levee district’s asset total assessed valuation has plummeted. (Photo courtesy of cooperativeconservation.org)

The directive affected some 38 communities from Granite City south to Columbia and as far west as Pocahontas and Scott Air Force base. U.S. Steel’s Granite City Works suspended operations on issuance of the conservation order.

The directive called on customers to restrict all non-essential water use and refrain from non-critical use like running sprinklers, dishwashers and washing machines. Customers were asked to avoid filling bathtubs and to take showers instead. However, a boil order was not issued, the company notes. No evacuation was required at the intake site, according to the company.

The conservation order was lifted May 9, after Illinois American crews worked around the clock to make repairs, according to Karen Cooper, a senior manager of field service and production with the company.

“Repairs of this magnitude should take weeks to months,” Cooper said.

With the island still flooded, drivers were brought in to repair the intake, Marks noted.

Illinois American has taken over water system in numerous communities over recent years, as municipalities and townships have struggled to cover the cost of compliance with increasingly stringent federal water quality standards.

All of Metro East’s federally maintained levees have so far performed up to expectation during this year’s spring flooding, according to Chuck Etwert, chief supervisor of construction for the Southwestern Illinois Flood Prevention District Council.

The council, a collaboration of Madison, St. Clair and Monroe counties, was established to bring Metro East’s federally funded levees into compliance with FEMA standards for protection against 100-year floods. The effort was launched after the agency threatened to decertify the levees; thereby excluding thousands of acres of American bottoms land from the federal flood protection program.

Financing was arranged through a combination of local bond issues and federal grants.

Final FEMA certification of all the area’s federally funded levees for 100-year flood protection is now expected by late this summer, Etwert said.  The district meanwhile has launched a program to ensure protection against 500-year floods.

Chouteau Island was once home to between 35 and 50 families, virtually all of whom moved after the flood of 1993, he explains. The levee district’s asset total assessed valuation has plummeted.

The district had a total budget of $4,213 for the fiscal year ended Aug. 31, 2016, according to the National Levee Database. Maintenance of the levee consists basically of mowing twice a year, which alone runs into the thousands of dollars, Marks said.

Many other local levees in Metro East “are about in the same shape,” Marks said. Fortunately, most protect only farm land.

Wood River has probably the best maintained system of local levees in the area, Marks said. Most of the potentially severe local levee problems probably lie along the Mississippi below Metro East, he said.

Residents in flood-prone localities can find safety classifications and other information on area levees using the online National Levee DataBase.

Monroe County has one, an official unnamed levee near the community of Fults, simply referred to by FEMA as the Monroe Levee.

The National Levee Database can be accessed at https://levees.sec.usace.army.mil