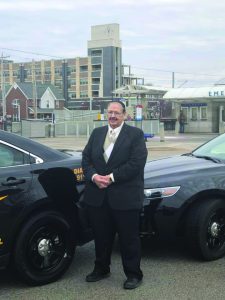 Herbert Simmons outside the Emerson Park MetroLink station. Simmons is joining the board of the Bi-State Development Agency, the group that oversees MetroLink operations. (Photo courtesy of St. Clair County EMA)

Southwestern Illinois Metropolitan and Regional Planning Commission President Herbert Simmons — better known to many as the village president of East Carondelet — has been named to the board of directors of the Bi-State Development Agency.

He becomes the only board member in common to two of the most powerful regional government entities in the St. Louis area: Bi-State and the East-West Gateway Council of Governments.

And that comes in addition to involvement with a nearly unmatched array of local, regional, and state entities with important roles in Metro East and beyond.

As a member of the St. Clair County Planning Commission, he helped to develop the county’s current comprehensive plan.

For 30 years, Simmons operated Centreville-based Simmons Ambulance; a critical provider of emergency medical service in a region where public ambulance service is often unavailable. He later became a manager for Sparta-based MedStar Ambulance.

He has been the village president of East Carondelet for the past 34 years. Before that he was the village police chief. He has also been a police officer in Washington Park, where he was deputized by the FBI and U.S. Marshalls, as part of special task forces.

He has also been a volunteer firefighter in the Washington Park area’s old Rosemont Fire Protection District. He remains a St. Clair County deputy coroner.

“Over the years, I have had the privilege of serving this region and this community in various capacities, and I’m honored to have this opportunity to serve as a board commissioner for Bi-State Development,” Simmons said in a press release. “I enjoy being involved in the community, and I look forward to doing whatever I can to support the mission of this organization.”

Simmons has never received any fees for serving on boards or commissions, an aide notes.

His first meeting of Bi-State board came Feb. 22; roughly a month after being appointed to the body by the St. Clair County Board.

He replaces Former Bi-State Board Chair Jeffrey K. Watson, who was appointed an associate judge in Illinois 20th Judicial Circuit in January and whose term on the board had expired.

Both come to Bi-State as the often-controversial agency faces concern over financial stability and rider safety on its bus and MetroLink light rail lines.

Simmons’ diverse array of responsibilities could make him an important resource as the Gateway region attempts to tackle a range of challenging issues, from a faltering economy to an aging population.

However, his rare status as a member of both the Bi-State and EWG boards is likely to dominate much of his time. The two have seemingly become intertwined over recent months.

The EWG is the federally recognized central planning agency and grant clearing house for the eight-county St. Louis region. Bi-State, though best known for operating mass transit in St. Louis, St. Louis County and St. Clair County, is an entity established under an interstate compact to facilitate economic development.

In its Connected 2045 document — the official transportation plan for the St. Louis region, EWG took the unusual step of denying Bi-State any further federal infrastructure grants; saying the agency cannot afford to maintain what it owns now. 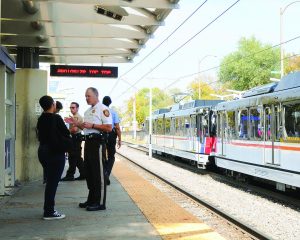 A MetroLink System-Wide Security Assessment was commissioned in the wake of numerous security issues on MetroLink trains and boarding stations. (Photo courtesy of St. Louis County)

As an EWG board member, Simmons, on Feb. 27, officially received the MetroLink System-Wide Security Assessment, commissioned by the council in the wake of numerous highly publicized security issues on MetroLink trains and boarding stations, and a subsequent downturn in both bus and light rail ridership. (See “Metro East Briefs.”)

As a member of the Illinois Terrorism Task Force, Simmons helped develop the Prairie State’s response plan for both natural and manmade emergencies. The plan took effect in 2015.

The St. Clair County EMA — charged with overseeing emergency preparedness and response in the county’s unincorporated areas — may be mostly known for monthly siren tests, but it also coordinates more than a dozen targeted programs including its Community Emergency Response Training initiative.

Simmons was instrumental in making St. Clair County EMA the first such agency in Illinois to use social media – and now, a social media model for EMAs nationwide. Its groundbreaking social media platform last year drew 15 million hits. It has been widely credited for last year saving the life of a critically ill St. Clair County man who had no other way to reach emergency responders.

As executive director of the St. Clair County Emergency Telephone System Board, Simmons has overseen conversion of the county’s 911 system to central dispatch centers.

During its three decades in operation, Simmons Ambulance became a critical part of the St. Clair County healthcare system, and the second busiest ambulance service in Illinois.

Even today, only five St. Clair County municipalities provided public ambulance services — leaving the rest of the county to rely on private services.

With the St. Louis region’s economic development efforts now in flux, Simmons’ experience at SIMAPC may come in handy.

SIMAPC, founded in 1963 and headquartered in Fairview Heights, offers economic development planning and consulting services for municipalities and other government entities in Bond, Clinton, Madison, Monroe, Randolph, St. Clair and Washington counties. It is one of eighteen such regional development agencies established across the state.

Over the years, the commission has guided or facilitated financing for some of Metro East’s largest public and private projects.

St. Clair County signed-on as a SLEP participant, but the role of Metro East in the new entity has not been announced.

Meanwhile Bi-State has been actively seeking a bigger role in Metro East development.

His Mississippi Riverside village was hit hard by the Great Flood of 1993.

Simmons’ rare blend of day-to-day community involvement and regional-level planning expertise could be important over the coming months — as top business and political leaders across the St. Louis area advocate greater regional cooperation but grassroots resistance to large government entities has perhaps never been stronger.

During last month’s EWG board meeting, Simmons received a briefing on the council’s latest OneSTL Report to the Region on area-wide initiatives.