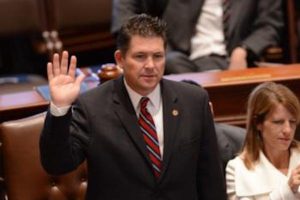 Former State Sen. Kyle McCarter takes the oath as he is sworn in as the new United States ambassador to Kenya on Jan.2. (Photo courtesy of State Sen. McCarter web site)

New U.S. Ambassador to Kenya Kyle McCarter is hoping to leverage a diverse background in business, politics, and foreign missionary work to advance a long-troubled East African nation— which some observers say may be ripe for advancement.

McCarter became the official U.S. envoy to Kenya this month, following nomination to the post by President Donald Trump on March 28, 2018 and U.S. Senate confirmed McCarter on Jan 2.

For 10 years, McCarter served in the Illinois State Senate representing the 54th District. He announced he would not seek reelection last year, after learning of his nomination for the ambassadorship. He a former candidate for the U.S. House in Illinois’ 15th District.

McCarters and his wife Victoria reside in Lebanon and have two children, Zach and Austin. A third child, their daughter, Amber, died in 2006 at the age of 21 from a heroin overdose.

Around Lebanon, McCarter is perhaps best known as the owner of Custom Product Innovations, one of the town’s larger businesses.

However, Each1Feed1 — the Christian ministry founded and overseen for the past 30 year by McCarter and his wife in Kenya – appears to be his true passion.

McCarter, whose serves as director of Each1Teach1 International, and his wife, the group’s director of education, travel to Kenya several times a year and are fluent in Swahili.

Established in 1987, Each1Feed1 has become one of the few sources of health care in Kenya’s poverty-stricken Tharaka region. its Thanantu Faith Clinic Dispensary provides care for up to 18,000 patients (about one-third of the region’s population) annually.

Its Excellent Academy Elementary School provides education, as well food and water, to around 200 students, each year and extends supported to their families often widowed-mothers.

However, Each1Feed1 directors believe it is the operation’s new Life Training Center that will ultimately transform the region. The center will provide a mix of post-elementary education, practical life-skill guidance, job training, and even college-preparatory courses, designed to ultimately enable Tharakans to develop modern commerce and industry in their region.

Though known for decades for poverty, political instability and epidemics, some believe Kenya —  currently the 19th poorest nation on Earth — is among the Third World nations that, some trade analysts believe, could now be poised for development.

Tharaka, is strategically located next to the Thanantu River, which never runs dry and allows for irrigation throughout the nation’s dry season.

The Thanantu has long supported hundreds of small farms in the region. Each1 Feed1’s new modern agriculture operations is already providing vegetables, fruit, and poultry products to the area.

Administrators believe the combined health, education and agriculture project could become a model for use throughout East Africa.

Supporters, during McCarter’s Senate confirmation hearing, expressed confidence that the Metro East businessman and politician was the right choice to help Kenya live up to its potential.

“I will use my experiences in business, public service and philanthropy to build on the already strong bilateral relationship between the United States and Kenya,” he told the hearing.

Initially established 15 years ago to make various size soft-sided containers and pouches for the aerospace and defense industries, McCarter’s Custom Product Innovations (CPI) is a broad-based product development and manufacturing firm, which has worked corporate partners, to develop a portfolio of goods for the commercial, industrial, military and fiscal training markets.

They include: AbMat , an exercise mat which has “changed the pushup forever” in gyms worldwide, according to the company website.

The Heavyweight,  a unique 16-pound weighted scrub brush, with “built-in elbow grease” that allows users to simply push and pull the brush instead of using their back to produce the force needed to effectively scrub a floor, the website states.

McCarter already has foreign trade experience; travelling four to six times each year to consult with CPI suppliers in China.

His nomination to the ambassadorship came after 15th District U.S. Rep. John Shimkus (R-Collinsville) and a coalition of Metro-East political and business leaders recommended him to President Trump.  The letter of recommendation came although McCarter had challenged Shimkus in the 2016 elections and reportedly planned to again.

The nomination came after the president expressed dissatisfaction with then-Ambassador Bob Godec, an Obama administration appointee.

McCarter’s nomination hearing was held up for months by Senate Democrats, who questioned him over allegedly derogatory comments about gays and former Secretary of State Hillary Clinton. He offered a partial apology.

McCarter graduated from Oral Roberts University in 1984 with a degree in accounting. He was a member of the St. Clair County Board from 2000 until 2009 when he was appointed to the Illinois State Senate.

McCarter also served for six years on the O’Fallon-Shiloh Chamber of Commerce Board of Directors, including two years as president and four years as chairman of its economic development committee.