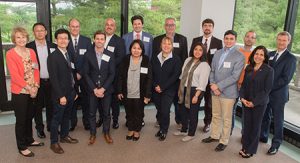 Up-close demonstrations of robotics-equipped warehouse-distribution centers and walking tours of an intermodal riverport were among the agenda items for “Discover Southwest Illinois,” a two-day, first-of-its-kind Metro East trade summit, hosted by the Southwest Illinois Trade and Investment Council (SWITIC).

“We’ve already received very positive feedback from our guests and from those here at home who played an important role in connecting local and regional exporters and service providers in Southwest Illinois with global partners seeking to further trade and foreign direct investment in our region,” said SWITIC Board President David Kniepkamp.

Taking part in the SWITIC tour were representatives from Argentina, Belgium-Flanders, Bulgaria, Chile, China, the Czech Republic, Ecuador, Italy, the Philippines, Spain and the Ukraine; who inspected more than a dozen Madison, Monroe and St. Clair county facilities, including:

Teodora Boteva, head of the Chicago-based commercial and economic office of Bulgaria’s Consulate General, was among those expressing some optimism that Metro East could develop into an international trade hub.

“Illinois is the fifth-largest state exporter of goods, exporting Illinois-manufactured goods to more than 220 countries last year,” she noted.

Foreign dignitaries on the Metro East development tour were all members of the Chicago International Trade Commissioners Association.

SWITIC is a nonprofit organization established to provide local and regional exporters with the expertise and contacts to begin or expand exporting of their products globally. The group also works to facilitate foreign direct investment opportunities in the area.

Since first formed in 2015 by government leaders in Madison and St. Clair counties, SWITIC has since expanded to serve all Southwest Illinois.

That trip will be conducted in cooperation with the State of Illinois Latin America & Caribbean Office and the Department of Commerce’s U.S. Commercial Service, both based in Mexico, organizers say.

Coordinating segments of the tour, along with Kniepkamp and Bowman, were Tim Schoenecker, interim dean of the SIUE School of Business, and Edie Koch, executive director of the Monroe County Economic Development Corporation.