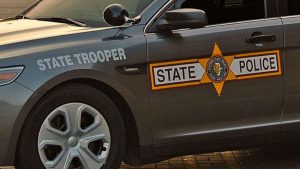 Illinois State Police said Murphy was a passenger in a Jeep Grand Cherokee, driven by Charles Thomas, 32, of Granite City.

Murphy was taken by ambulance to a regional hospital while Thomas was uninjured, police said.

According to State Police, Thomas was traveling north on I-55/70 near Route 203 when he left the roadway to the right and hit a light pole.

State Police said the crash remains under investigation and that charges are possible.