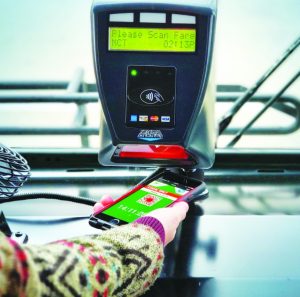 When a pass is purchased, a QR code is generated on the passenger’s smartphone, which can be scanned by MCT’s on-board readers.

Previously MCT’s monthly passes were limited to a calendar month.

The new Token Transit App also allows users to purchase MCT passes and “gift” them to a friend, employee, family member or client. MCT will continue to sell traditional monthly bus passes at 21 retail sites in Madison County, including Schnucks and Walgreens locations, the Wood River Library, and the SIUE Information Center, as well as the MCT Base of Operations and online at: www.mct.org/store.

MCT will also continue to offer on-board passes, such as the 2-Hour Zone Pass, 2-Hour Regional Pass, and Express Round Trip Pass, which can be purchased with cash upon boarding. 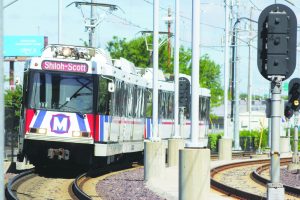 A recent report shows the need for the Bi-State Development Agency to develop a formal security plan for its MetroLink light rail system and public bus lines.

The Bi-State Development Agency needs a formal security plan for its MetroLink light rail system and public bus lines. That is the first of more than 60 recommendations in a mass transit security analysis, submitted Feb. 27 to the East-West Gateway Council of Governments (EWG).

Nine have already been completed, with another 37 already in progress, according to the consultancy.

In addition to a formal security plan, the assessment’s 11 security recommendations call for better coordination among the various public and private security entities protecting Bi-State lines— including the St. Clair County Sheriff’s Department.

It also calls for better safety metrics, data-based deployment of security staff, standardize radio channel use among security staff, as well as public relations measures to “improve media relations and messaging regarding security” and “de-politicize conversation regarding Metro security.”

Under the assessment’s 14 police-security staffing recommendations, Bi-State’s K-9 security teams would be eliminated, and Bi-State security guards would be banned from carrying privately-owned weapons. The report also calls for removal of “all conflict from the public realm.”

The assessment’s seven procedures and training recommendation calls for both law enforcement officers and Bi-State security guards to undergo increased training and certification in mass-transit oriented issues, including the handling of mentally ill or disturbed passengers.

A “refreshed” rider code of conduct would be put in place,  although a recommendation to enforce the code through civil penalty or arrest remains “under review,” according to the assessment.

The assessment’s 10 fare enforcement recommendations have drawn criticism for including “fare sweeps” on trains and clearly delineated “paid fare zones” on MetroLink boarding platforms, but not turnstiles or other commonly used mass-transit entry barriers.

Eight technology-related recommendations include updating and integrating Metro’s closed-circuit  television (CCTV) system with other technology or other CCTV systems; evaluating its Passenger Assistance and Emergency Telephones; and moving ticket vending machines and validators to standardized locations on all MetroLInk platforms.

A call for bids for the new security plan is now reportedly being prepared.

The Southern Illinois University (SIU) Board of Trustees, Feb. 21, approved fee-related changes at the university Edwardsville campus for the fall and spring terms of the 2019-20 academic year.

Instituted during the 2018-19 fiscal year, the consolidated GSF charges a consistent amount per credit hour for undergraduate, graduate and professional students whether enrolled in on-campus, off-campus, online or hybrid courses.

In-state tuition will remain available to all new and continuing domestic undergraduate students.

In fall 2019, all domestic graduate students will be charged the in-state graduate tuition rate of $8,155.20 (12 hours per semester). A $237.60 annual increase (3 percent) was approved for graduate students for the coming fall.

International students will continue to be assessed a 2.5 times surcharge on the in-state rate, unless they qualify for an alternate tuition rate.

For the second consecutive year, School of Dental Medicine tuition will remain the same. In-state SDM students will pay an annual tuition of $29,998. Beginning fall 2019, the SDM is offering the in-state rate to all new and continuing domestic dental students in its traditional program to build and maintain a diverse student population.

This does not include the SDM International Advancement Placement Program, which remains at 2.3 times the instate dental rate.

A course specific fee was increased in the School of Nursing, while another was eliminated in the School of Education, Health and Human Behavior (SEHHB). A $20 increase (6.25 percent) to $340 per nursing clinical class will be effective fall 2019.

The additional revenue will cover increased expenses in mandated state and federal accreditation, licensure and testing requirements for nursing.

The $650 fee for the SEHHB class Instructional Leadership and Supervision: Theory and Research (EDAD 525a) is being eliminated. The fee was established to meet training required by the Illinois State Board of Education but was discontinued effective Dec. 31, 2018.

University Housing rates will increase 2 percent in many categories, effective May 2019, and will offset inflationary cost increases projected at 2-3 percent, fund debt service payments and maintain adequate fund balances in housing operations, according to university statement.

A Deluxe Private room rate in the Residence Halls is decreasing 39 percent from $6,170 to $3,775 per semester

A Deluxe Suite rate, for units in an updated wing of Woodland Hall, was approved. The Deluxe Suite bedroom will feature new flooring and furniture, including a full-size bed and lounge chair. Deluxe Single Bedrooms will have to share a bathroom with only one other individual.

Visit siue.edu/paying-for-college for more information about tuition and fees. 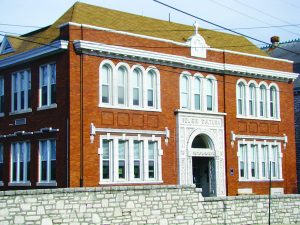 SS. Peter and Paul School in Alton will be closing. (Photo courtesy of Diocese of Springfield)

“The fixed costs of running a school have meant that it has become impossible to keep the financial balance between setting a proper and affordable tuition, fundraising efforts, and a parish subsidy that the parish can afford to pay on an ongoing basis,” he wrote. “The combined parish-school budget is projected at a deficit of $345,000 for the current 2018-19 fiscal year. The previous fiscal year showed substantially the same deficit. Our debt to the diocese has grown to some $750,000.”

The pastors of St. Mary’s and St. Ambrose in Alton will accept SS Peter and Paul parish at their parishioner tuition rates this fall, the letter assured.