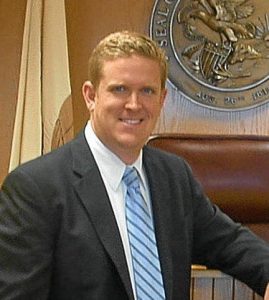 St. Clair County State’s Attorney Brendan Kelly is suing two of the nation’s largest pharmaceutical companies on behalf of county residents and other Illinoisans and who have suffered “addiction, overdose, and death” resulting from misuse of opioid prescription pain relievers.

The suit alleges Purdue and Abbott actively worked to conceal information regarding the highly addictive nature of opioid painkillers, such as OxyContin, from both the public and healthcare providers.

The suit also contends aggressive marketing of the drugs has helped to fuel abuse.

In a prepared response to the suit, Purdue Pharma representatives said their company has been a leader in developing and advocating abuse-deterrent technology and prescription drug monitoring programs.

Abbott did not immediately issue a response.

The two companies have been named in a number of similar law suits filed around the nation, including one in Chicago.

Representing St. Clair County as specially appointed assistant state’s attorneys in the lawsuit are David Cates of Swansea, Eric Holland and Seth Crompton of the St. Louis-based Holland Law Firm, and Christopher Cueto and Michael Gras of the Cueto Law Firm in Belleville.

Construction of a $28 million Hyatt Place hotel near Belleville’s new Hofbräuhaus complex may not begin as scheduled this spring.  In a civil suit, Effingham-based Keller Development charges ICON Commercial Lending of Utah has failed to provide financing for the Hyatt, as well as for another hotel the developer plans to open in Jonesboro, Ark.

Keller announced in November that ICON would provide up to $30 million in financing for a planned six-story, 130-room hotel, and a 40,000-square-foot conference center, next to the Hofbräuhaus German-style restaurant and brewery, currently under construction on Ill. Rt. 15 across from the National Shrine Our Lady of the Snows.

However, construction of the Belleville hotel is stalled and work on the Joneboro has stopped due to a lack of financing, Keller spokespersons said in a prepared statement last week.

In addition to the anchor Hofbräuhaus beerhall, the 33-acre complex is to include hotels, the conference center, restaurants, a soccer park and a convenience store. Construction on the Hofbräuhaus building began in late 2015. It is currently scheduled to open late this summer, a year later than initially anticipated. Construction on other planned attractions at the complex has yet to begin.

The City of Belleville has already extended sewer lines to the Hofbräuhaus site at a cost of $2 million and approved up to $32.36 million in tax incentives based on tax revenue generated by businesses in the complex.

The hotel site is owned by the Missionary Oblates of Mary Immaculate, the religious order that owns Our Lady of the Snows.

Free parking may end at MidAmerica

The commission, at its April 20 meeting, instructed to airport director Tim Cantwell to develop a list of qualified private parking lot operators and solicit bids for operation of the air terminal parking facilities. Before implementing any parking charges, commissioners plan to assess bids and determine how much revenue might be raised.