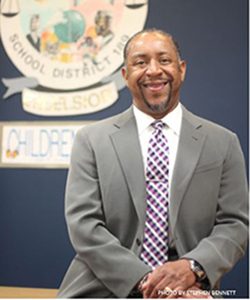 He urged the state board to recommend continued special “intervention” funding for the district, as part of Illinois’ Fiscal Year 2020 budget.

In line with objectives set by the state board for the district, East St. Louis students are posting steadily improving scores on standardized Partnership for Assessment of Readiness for College and Careers (PARCC) achievement tests, Culver reported.

However, the district remains in tenuous fiscal shape — even as special state support programs are about to expire, he emphasized.

The district’s recent financial forecast for fiscal year 2020 projects a $500,000 budget deficit, with the deficit increasing each year after that.

The district currently has 25 teaching vacancies, which “directly impacts student achievement,” Culver told the state board.

He called for a new state incentive program to encourage experience teachers to remain in the field of education.  He is also called for the state to begin providing stipends or other special incentives for teachers in “hard-to-fill” areas, such as foreign language, special education, and upper level math and science.

The ISBE effectively took control of the East St. Louis School District in 2011 — citing continuing academic and fiscal problems in the district — in May 2011.  In August of that year, Culver was appointed as a special liaison between the state board and the district.  Two months later, he was named the superintendent of District 189.

He has since been working with the local board of education, the ISBE, and a special state-appointed financial oversight panel (FOP) to improve student achievement and financial stability.

Special state financial support for the district was approved as part of the intervention.

Overall, the state intervention has been beneficial to the district, Culver told the state board last month.

However, Culver is concerned that the program of financial support for the district may no longer be fully funded.  The district’s 2020 budget projections assume discontinuation of the state support, Culver said.

The East St. Louis School District has 10 schools; four schools rated commendable and five rated among the lowest performing in the state, on new 2018 ISBE School Report Cards. (One district school does not meet size or other criteria for the state rating program.)

The district has a 73 percent graduation rate; an 82 percent chronic absenteeism rate; and a 76 percent teacher retention rate.

The Carbondale-Marion area is one of only 38 metropolitan statistical areas in the nation where one-in-five people live below the federal poverty level, according to an analysis of U.S. Census Bureau data by the financial news website, 24/7WallStreet.com.

Overall, Carbondale-Marion ranks 15th on the website’s list of lowest-income-area; with a poverty rate of 22.6 percent and a 2017 unemployment rate of 4.8 percent.

The area’s median household income is now just $43,892, ranking it in the bottom 10 percent.

WallStreet24/7 analysts found the data in compiling a list of U.S. areas with a 20 percent or great poverty rate. They found only 38 existed.

During a 2017 visit to the area, U.S. Sen Dick Durbin (D-IL) blamed the demise of the Carbondale economy on a “perfect storm” of factors include loss of state funding to Southern Illinois University Carbondale, state cutbacks in student assistance, and federal cutbacks in transportation funding. Carbondale is home to major Amtrak terminal.

“We’re not sure where Carbondale is going to be five years from now,” Carbondale Mayor Mike Henry told reporters during Sen. Durban’s visit last year.

McAllen-Edinburg-Mission, Texas, with a poverty rate of 30 percent, is the nation’s poorest area, according to the 24/7WallStreet survey.

The State of Illinois has released $1 million in capital funding for a planned Mississippi River port terminal in Cairo, according to State Sen. Dale Fowler (R-Harrisburg).

The proposed facility would include a land-accessible transportation hub due to serve the nearby Canadian National Railroad, connecting Chicago with New Orleans, as well as the three nearby U.S Interstate highways (I-57, I-55, and 1-24).

The port is being developed by Alexander-Cairo Port District, established in 2010, which says more than a dozen companies have shown interest in the Cairo river port project.

The district is expected to use all its capital funding by June and hopes to complete secure all necessary permits within 24 months, according to a statement for State Sen. Fowler. 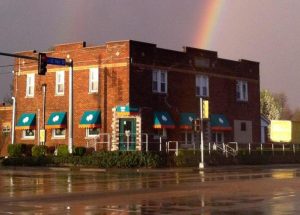 Belleville-based FKG Oil, Inc. has purchased the former site of the landmark Dandy Inn, 1030 Lincoln Highway on the border of Fairview Heights and O’Fallon, for use as a MotoMart gas station-convenience store, Fairview Heights officials confirm,

First established in 1850 as Becherer’s Tavern, the Dandy Inn was for more than 150 years a focal point in development of the surrounding communities of O’Fallon and Fairview Heights.

Originally a one-room log cabin —  with a well and horse trough in front — offering food, water, and supplies to travelers on the old Vincennes Trail to America’s newly opened western territory, the inn became a popular gathering place and supply depot for area farmers and miners. Abraham Lincoln is widely believed to have been an early patron.

A two-story brick structure, later constructed on the site, would remain a restaurant and tavern, until it closed in January 2017.

Plans and permits applications for the planned new convenience store have not yet been filed, city officials say.