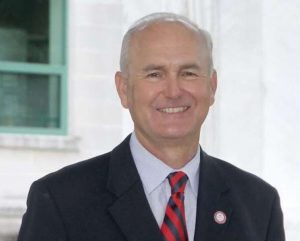 Community partnerships and quality of life were among the themes as a delegation of local government, academic and business leaders met with one of Japan’s most powerful business organizations, in Washington, D.C., to discuss opportunities in Metro East.

The roundtable conference with representatives of Keidanren USA was the latest in a series of meetings with major business groups, according to Dr. Ronda Sauget, executive director and CEO of the Leadership Council Southwestern Illinois.

Keidanren USA, is the American liaison entity for Keidanren, the Japan Business Federation; one of three major business organizations in the nation. Its membership includes  1,329 Japanese companies, 109 industry associations and 47 regional economic organizations.

Longtime Madison County Regional Superintendent of Schools Bob Daiber plans to run for the chairmanship of the Madison County Board during next year’s November general election.

Daiber has been regional superintendent for the past 12 years and decided not to seek reelection in 2018.  Last year, he was one of six primary candidates for the Democratic nomination for Illinois governor — which ultimately went to now-Gov. J.B. Pritzker.

Daiber has been Madison County regional superintendent for the past 12 years but in 2018 announced he would not seek reelection to the post.

He is a former Marine village trustee, Marine Township supervisor, and Madison County Board member.

Daiber formally announced his candidacy for the County Board chair on June 13 at the International Brotherhood of Electrical Workers Hall in Collinsville. Among the roughly 75 supporters on hand were union officials, municipal officials, State Rep. Monica Bristow (D-Alton) and several elected Democratic countywide officeholders.

Past County Board Chairman Alan Dunstan, a Democrat defeated by Republican Prenzler in 2016, has not yet formally announced whether he will again seek the office.

The County Board race will likely heat up in September, when candidates can begin circulating nominating petitions for the March 2020 primary.

The U.S. Federal Railroad Administration (FRA) has announced a $28.8 million grant to the Terminal Railroad Association (TRRA) of St. Louis, to replace the main span girders on the MacArthur Bridge crossing the Mississippi River. 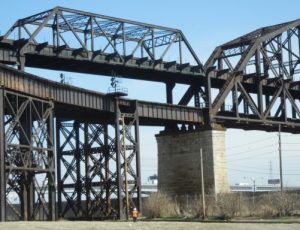 The U.S. Federal Railroad Administration is allocating money for improvements to the MacArthur Bridge crossing the Mississippi River. (Photo courtesy of preservationresearch.com)

The main span girder replacement is key part of $57.3 million renovation of the bridge; funded through a public private partnership between the TRRA and the Federal Railroad Administration. Each will provide approximately 50 percent of the funding needed to complete the project.

“Together, both projects will extend the life of the bridge to approximately 2085, allow for dimensional loads and enable it to continue to serve the St. Louis region freight and passenger rail network,” Terminal Railroad said in a statement.

Main topics: principles of economic development and positioning communities for growth, finding and using data, strategies for encouraging small business engagement, best practices for being development friendly, tourism as an economic driver, and the importance of building livable communities, according to MCCD Director Trudy Bodenbach.

A featured panel discussion, moderated by Morris Taylor, Ph.D., associate professor and chair of the SIUE College of Arts and Sciences’ Department of Public Administration and Policy Analysis, included:

The Third Circuit’s nine judges, in a secret ballot earlier this month, voted not retrain associate Judge Jennifer Hightower.  She will continue to serve on the bench through June 30.

Chief Judge William A. Mudge called for nominees to the court in a June 13 notice to members of the Illinois Bar.

Hightower is one of the youngest judges ever appointed in Madison County.

All 12 of the circuit’s other Madison County associate judges were retained.