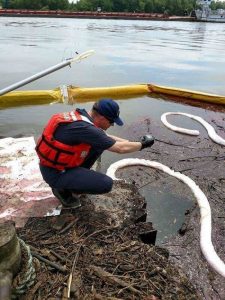 Personnel from Coast Guard Sector Upper Mississippi River responded on July 5 to a report of three tugboats and a deck barge that were tied together and had begun taking on water at mile marker 21 on the river.

The sinking tugboats held approximately 4,850 gallons of diesel and oil at the time they began taking on water, according to the Guard.

The tugboat company was working cooperatively with the Guard to minimize potential environmental impact, according to a USCG statement.

Coast Guard officials conducted 11 miles of shoreline assessment and oversaw deployment of 1,500 feet of oil and fuel absorbent boom to create a collection point to contain any discharge.

Smaller sheen-producing quantities of unrecoverable product have been substantially contained by an aggressive growth strategy, according to the Guard.

“While ensuring responder safety is always paramount, minimizing any potential environmental impact is a clear goal of the salvage effort,” said Capt. Scott Stoermer, commander of Sector Upper Mississippi River. “I am encouraged by the committed effort of the vessels’ owner.”

However, the incident is considered “a major marine casualty” and is under investigation, the Coast Guard statement notes.

Firm plans to raise towboat and barges has not been announced as of the Chronicle’s deadline.

Charges were dropped against Alorton mayor

Reed last year was charged with official misconduct after a driver reported to Illinois State Police that a civilian female driver, driving a vehicle with the mayor’s name on the side, was impersonating a police officer by operating the vehicle with a police-type flashing light. 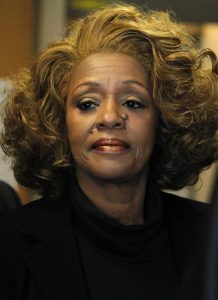 She also faced four previous charges, filed between 2016 and 2018, including violation of the Illinois election law for alleged vote buying.

Under the July 2 plea agreement, Reed pleaded guilty to a misdemeanor charge of possessing an oscillating light, and all felony counts were dismissed.

She was sentenced to $250 in fines and court costs.

Reed was removed as Alorton mayor in 2014 after pleading guilty to smuggling a cellphone into the village jail.

That conviction was removed from her record after she attended a drug treatment program. She was later re-elected as mayor.

Welch served with the department for nearly 30 years; starting in 1990 as a part-time dispatcher. He became a police officer in 1995, and has been the village’s police chief since May 2018.

For eight years, he was assigned part-time to the FBI Springfield Division Child Exploitation Task Force. He was selected to attend the FBI National Academy in 2016.

However, the village’s Board of Trustees in May voted unanimously not to reappoint Welsh as police chief.

Dickson Mounds Museum will host a Mississippian Conference on Saturday, July 27, from 8:30 a.m. to 4 p.m. The program is open to the public and there is a $5.00 registration fee, payable at the door.

Dickson Mounds Museum exhibits 12,000 years of human history in the Illinois River Valley, focusing on the nearby Woodland and Mississippian mounds.

Topics will include excavation updates; new views provided by LiDAR laser remote sensing, drone imagery, and geophysical surveys; new analyses of artifacts from old collections; and, the latest perspectives on the spread of Mississippian culture into the Late Woodland populations of the Central Illinois River Valley, based on almost nine decades of archaeological study.

The subject matter will be of interest to the general public, students, and professional archaeologists.

Registration is from 8:30-9:00 a.m. and presentations will begin at 9 a.m. Light refreshments will be provided. Lunch break is on your own from 11:30 a.m. to 1:30 p.m., with options available in Havana and Lewistown. The conference is jointly organized by the Illinois State Museum and Western Illinois University.

Dickson Mounds Museum, part of the Illinois State Museum system, is located between Lewistown and Havana off Illinois Routes 78 and 97.

The Board of Trustees of Lewis and Clark Community College is seeking a law firm or individual attorney to provide college attorney services, according to a statement from the college’s public affairs office.

The new college attorney will be required to provide general community college counsel, basic legal services, and advice on special projects and issues.

Experience with community colleges and contract law is preferable but not mandatory.

Interested law firms or attorneys can obtain a request for quotation (RFQ) document by emailing to rfqforlccc@gmail.com.

They can submit qualifications and proposals to the board, using the same email address, until 4 p.m. Monday, Aug. 5, 2019.

The TIP provides a four-year schedule of all transportation projects and programs in the St. Louis region that are to be funded with federal dollars – including numerous projects in Metro East.

Comment will also be accepted on the agency’s Draft Fiscal Year 2020-2023 and Air Quality Documents AQCD); an analysis demonstrating that future emissions from transportation projects and programs in the TIP fall within federal and state air quality implementation plans.

The agency will also accept comment on the documents online, through Aug. 5, at www.ewgateway.org.