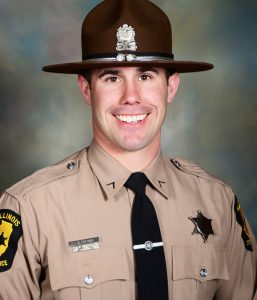 The shooting death of an Illinois State Police (ISP) trooper, killed while executing a search warrant in East St. Louis, is spurring increased over violent crime in the St. Louis-Metro East area — and the effectiveness of efforts to curb it.

ISP South SWAT Trooper Nicholas “Nick” Hopkins, 33, of Waterloo was shot Aug. 23 while attempting to search a residence in the 1400 block of North 42nd Street, at Caseyville Avenue, just before 5:30 a.m.

Hopkins was struck during an exchange of gunfire. Three people were taken into custody at the scene. Troopers, with armored vehicles, remained on site for hours fearing others may have been in the building.

Charged with one count of murder is Christopher R. Grant, 45, who remains in the St. Clair County Jail on $5 million bond.

Also being held in the jail is Al Stewart Jr. who faces armed violence, obstruction of justice, and possession with intent to distribute cannabis charge; with bond set at $250,000.

Crowds lined streets in Waterloo, Aug. 26, as an escorted hearse return the slain trooper to his hometown.

“I’m very proud of Waterloo for coming out for their son,” Waterloo Mayor Tom Smith said.

Flags around Waterloo and much of the rest of Metro East have been lowered to half-staff, after Gov. J.B. Pritzker authorized the action. Madison County Board Chairman Kurt Prenzler specifically ordered flags lowered at public buildings in his county.

“Today, the entire state mourns the loss of ISP South SWAT Trooper Nicholas Hopkins, a young man who dedicated 10 of his 33 years on this earth to protecting the people of Illinois,” Gov. Pritzker said in a prepared statement.

An ISP patrol car, parked outside Waterloo City Hall in honor of Hopkins, has been adorned with flowers and other remembrances.

Illinois State Police say Hopkins is the third trooper to die in the line of duty this year.

He is survived by his wife Whitney Hopkins; children Evelyn and Owen (twins), and Emma; parents James Hopkins and Verna Hopkins. He was a member of Life Community Church in Columbia.

Nick was a 2004 graduate of Waterloo High School. His older brother, Zack, is a sergeant with the Columbia Police Department. Their father is longtime Waterloo alderman Jim Hopkins

Donations may be made to the Hopkins family by visiting the Illinois State Police Heritage Foundation website at www.isphf.org/donations, or mailing contributions to the Illinois State Police Heritage Foundation, P.O. Box 8168, Springfield, IL 62791. Donation made through the  website, should be marked with the note “Trooper Nick Hopkins Memorial Fund” in the comments section. Trooper’s death elevates concern 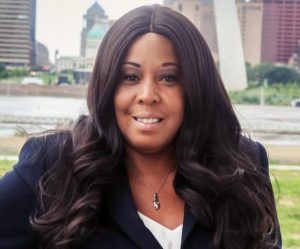 An African-American native of North St. Louis, who has lost a brother to gun violence, she believes underprivileged urban areas, often, have not been well served by much of today’s political establishment.

She and husband, Charles, also a retired police officer, are raising a blended family of six children.

Also pitching their candidacies to party leaders last week were:

All four are self-described conservatives, support Second Amendment rights, oppose abortion and hope to reform immigration policies. All praise the state of the economy under President Trump.

Durbin, originally from East St. Louis, is Illinois’ senior senator from Illinois, first elected in 1996. He has been the Senate Democratic Whip since 2005, the second-highest position in the Democratic leadership in the U.S. Senate.

Illinois State Sen. Paul Schimpf (R-Waterloo) will not seek re-election in the 58th District in 2020, according to an Aug. 23 announcement.

The statement offers no reason for Schimpf’s decision to retire from the state senate; however, he is rumored to be under consideration for a federal judgeship.

“Although I am honored to represent the people of the 58th District in Springfield and enjoy serving as their state senator, I am unable to commit to serving an additional term that would start in 2021,” said Schimpf in the statement. “Therefore, I will not be a candidate for re-election in the upcoming campaign cycle.”

“I am focused on making the remainder of my term as effective as possible for the people of Southern Illinois,” Schimpf said.

State Rep. Terri Bryant (R-Murphysboro) is among those said to be considering a run for the 58th District State Senate seat.

Candidates can begin circulating ballot nomination petitions for the 2020 election cycle begins this week. Candidate packages became available at county clerks’ offices on Sept. 3. State Senate candidates variously must collect between 1,000 to 3,000 signatures to earn a place on the ballot.

The importance of the Mississippi River to Metro East, the St. Louis area’s status as the third largest inland port in America, and funding for disaster recovery were the keys issues emphasized by Madison County Board Member Chris Guy, during an Aug. 20 White House State Leadership Conference. 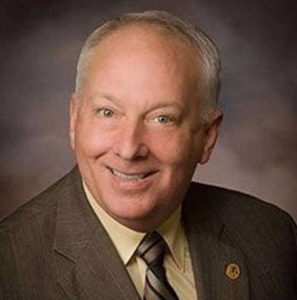 With workforce development a recurring topic at the conference, Guy urged the White House to study existing job training programs in Madison County.

“Our workforce development apprenticeship programs in Madison County are second to none. We have excellent programs for individuals that want to become a nurse, work in the oil industry or become a welder. I was told the administration plans to build on the progress which has been made in order to expand job opportunities,” Guy said.

State leadership conferences have become an annual event at the White House; called to provide top administration officials with insight on local priorities around the nation – as well as help city and county officials tale action on national issues at the local level.

“As they say, ‘all politics is local’,” Guy observed.

The conference is one of several being held at the White House for municipal and county leaders from various sections of the nation. The meeting was bipartisan, according to Trump administration spokespersons.

Guy was part of a select group of elected officials invited from Illinois, Indiana, Minnesota, and Wisconsin.

Beiser named to racing board

Gov. J.B. Pritzker has appointed former state representative Dan Beiser of Alton to serve on the Illinois Racing Board.

The appointment is still subject to confirmation by the Illinois Senate.

The state racing board is charged under the Illinois Horse Racing Act with regulating horse racing and ensuring the honesty and integrity of racing and wagering.

Fairmount Park near Collinsville is among the facilities regulated by the board.

Beiser, a Democrat, represented the 111th Legislative District in the Illinois House of Representatives from 2004 to 2017. He previously served as an alderman and city treasurer in Alton.

For eight years, he taught pre-teen and teenagers with behavioral disorder at the Educational Therapy Center of Madison County in Troy.

Beiser is a former president of the Catholic Charities Advisory Board and Illinois Municipal Treasurers Association.

He holds a master of science degree in special education, as well as a double bachelor of science in mass communication and recreational administration from Southern Illinois University Edwardsville.