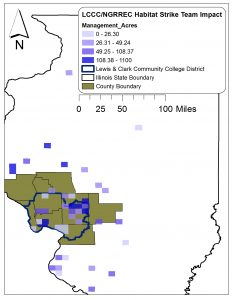 The Mississippi River Palisades north of Alton will be among the areas garnering new attention under expansion of the National Great Rivers Research and Education Center’s (NGRREC) Habitat Strike Team program.

The Habitat Strike Force, which originally had just three members, has also managed or assisted   management of approximately 8,000 acres across 23 counties over the past three years.

Under the program expansion, the group will provide services on additional lands, under new partnerships with the IDNR Division of Natural Heritage, Illinois Nature Preserve. Commission, The Nature Institute and the Great Rivers Land Trust

The program expansion comes as the result of increased funding – now totaling 353,632 – from the IDNR’s Habitat Fund and its Division of Natural Heritage.

The new funding will also facilitate internships, as well as educational opportunities at Lewis & Clark Community College, where the task force is, in part, based.

In the future, the group may offer some guided hikes or other activities for the public.

The group was established specifically to provide conservations in the Illinois confluence region, near the joining of the Mississippi, Missouri and Illinois rivers. The college district is its basic service area.

The Illinois Nature Preserve Commission was established specifically to oversee protection and stewardship of our state’s highest-quality natural areas in southwestern Illinois.

Newman oversees some 70 sites that Newman from Calhoun to Randolph County.

The continually developing Metro East region “presents many challenges for keeping all wildlands, including INPC sites, ecologically healthy,” said Newman. “A dedicated restoration team that focuses solely on stewardship in southwest Illinois provides an opportunity to significantly improve the health of these lands.”

The Palisades Reserve, new owned by the Great Rivers Land Trust, represents one of the best remaining examples of undisturbed, biologically important lands in Illinois; with its oak and hickory forests looking much as they did one hundred years ago, according to the NGRREC.

The 430-acre parcel of bluff top land, along the Great River Road, is home to eleven endangered or threatened species of plants and animals, it is in the largest flyway in North America for migrating birds. Its unfragmented forest provides essential breeding habitat for a suite of songbirds. 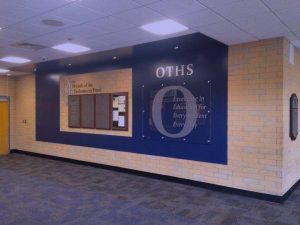 Edwardsville Community Unit School District 7 and O’Fallon Township School District 203 are among 11 Illinois school districts honored, Dec. 12, by The College Board for improved access to advanced placement (AP) courses and improved scopes on examinations for those courses.

Many colleges and universities grant placement and course credit to students who obtain high scores on those examinations, according to The College Board, the New York City-based not-for-profit that oversees such programs.

The Edwardsville and O’Fallon districts are among 250 named nationwide to the College Board’s 2019 AP Honor Roll.

AP Honor Roll recognition is granted to school districts for improving access to advanced placement courses among segments of the student populations — including students of color – that are historically underrepresented in such programs.

At the same time, districts must either maintain or increase the percentage of students who earn scores of “3” or higher on advanced placement course exams.

In compiling this year’s list the College Board reviewed three years of Advanced Placement data, from 2017 to 2019.

The Illinois State Board of Education is currently attempting to improve access for low-income students. The State of Illinois’ Fiscal Year 2020 includes $2.5 million for test waivers, which can help defray the cost of advanced placement participation for students.

Without subsidies or waivers, AO tests can cost nearly $100.

Flash flooding that engulfed much of the Granite City area in August was due, not to the Metro East Sanitary District’ (MESD) groundwater collection system, but years of street overlays that have gradually choked off access to sewers, according to a suit filed by the district, Dec. 5.

In addition to the volume of rain, Tony Falconia, interim director of the Madison County Emergency Management Agency, attributed the flood to the area’s aging groundwater drainage system.

In its countersuit, this month, the sanitary district contends Granite City has paved over many of the town’s storm sewers — offering photos on the day of the flooding to prove.

The suit also notes that the municipal government owns and maintains most of the storm sewers in the city, and contends those sewers were overloading with outflow from sump pumps.

The Illinois Center for Autism is seeking $445,776 in operations assistance through the East West Gateway Council of Government’s (EWG) Enhanced Mobility of Seniors and Individuals with Disabilities grant program.

The not-for-profit provides services for individuals with autism through centers in Fairview Heights and Belleville.

Funding would come through a 50-50 mix of federal and local monies. The grant period would be three years.

Hylla was elected vice-chairman of the Illinois Conference of Chief Circuit Judges in 2014.  He has been serving on the conference’s jury representation and judicial mentor committees.

He was appointed chairman of the Illinois Supreme Court’s first e-Business Policy Advisory Board created in 2014; after chairing the Illinois Judicial Conference’s Committee on Automation and Technology.

He has also been serving on the Illinois Supreme Court’s Alternative Dispute Resolution Coordinating Committee, Special Advisory Committee on Justice and Mental Health Planning and Commission on Access to Justice’s Steering Committee for JusticeCorps.

He was the recipient of a 2010 NAACP Civic Service Award.

Before being elected to the circuit court, Hylla served a city attorney for Madison and Venice, Madison County Special Public Defender, counsel for Service Employees International Union Local 98, and president of the Tri-City and Madison County bar associations.

A Madison native with an undergraduate degree from Southern Illinois University Edwardsville and a law degree from St. Louis University, Hylla is a member of the state bars of Illinois, Missouri and West Virginia.

He and wife Anita reside in Granite City. They have a daughter named Amelia.