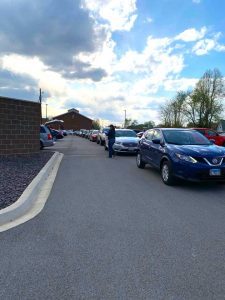 In addition, virtually all law area law enforcement agencies — including the Madison County Sheriff’s Department, local police departments, and the Office of the Madison County State’s Attorney — the initiative involves more than a dozen senior and support service providers.

The announcement of the new effort was timed to coincide with an annual springtime increase in scams targeting senior citizens.

“We always hear about the asphalt and construction scammers,” Lakin said. “What we are trying to do is limit the victimization of seniors.”

Often, he noted, seniors feel embarrassed about being scammed and do not report it.

Under the new Triad alliance, senior support groups and social service agencies will work to establish the sheriff’s department as a trusted source of information.

Triad participants plan to host “savvy senior seminars” and events for older adults. The first —  a “shredding event” for documents that could be targeted by identity thieves — was held April 21 at the sheriff’s department in Edwardsville and Senior Services Plus in Alton. Both were cosponsored by local chapters of the American Association of Retired Persons (AARP).

Triad organizers also plan to use social media as a platform to bridge younger and older adults in the county.

Leading the effort is Madison County Sheriff’s Department Lt. Kristopher Tharp, the president of a new Seniors and Law Enforcement Together Council (SALT), which began working on the initiative last year.

While new to Madison County, the Triad approach has been used successfully elsewhere, Lt. Tharp notes

Madison County currently has 41,000 residents aged 65 years or older: 30,000 living in a household with someone else and 11,000 living alone. said according to the U.S. Census Bureau.

The Madison County voters, this fall, may be asked to consider a Property Tax Extension Limitation Law (PTELL) that would prohibit local government entities from increasing their annually-established property tax levies by more than rate of inflation, or more than 5 percent, or whichever is lower.

Larger tax levy increases would still be possible, but only with voter approval.

Madison County Board President Kurt Prenzler formally introduced the measure at the April 18 county board meeting, for placement on the November 6 general election ballot.  It was referred to the board’s Government Relations Committee for analysis.

If approved, the law would go into effect on Jan. 1 following the election

PTELL laws are designed to ensure property tax rates do not increase faster than property values, according to Board Chairman Prenzler.

The governing boards of local taxing entities each year establish levies – the amount of revenues they wish to raise through taxation – as part of their annual budgets.  The levies are then used by county officials to determine the property tax rates for those entities.

Property tax rates in Madison County are “out of control,” Board Chairman Prenzler said in a news release last week.

More than 30 of Illinois’ 102 counties already have such limitations in place, according to the Department of Revenue.

Already placed on this fall’s general election ballot in Madison County: a referendum to eliminate the elected position of Madison County Recorder in 2020 and transfer that official’s functions to the County Clerk’s Office.

Currently, only two of the 22 judges in the circuit are Republicans, Plank noted in a statement last week.

That effectively gives the circuit judges the power to determine whether the associate judges are Republican or Democratic, Plank notes.

Plank’s statement comes after attorney Ron Foster, the chairman of the Edwardsville Township Democrats, this month was tapped to fill the vacancy created when former Associate Judge Don Flack, left the Third Judicial Circuit to return to private practice.

In 2015, when Third Judicial Circuit judges opted not to retain five of the circuit’s nine associate judges, none of the vacancies was filled by a Republican; even though several prominent GOP attorneys submitted applications.

Meanwhile, the area served by the Third Judicial Circuit is increasingly Republican; Plank notes, In Madison County, for example, Republicans now hold most county wide offices and control the Madison County Board.

The Third Judicial Circuit covers Madison and Bond counties.  The court has nine circuit judges in addition to its 13 associates.

Associate judges in Illinois serve four-year terms and are selected by circuit judges through a secret ballot.

O’Fallon residents have until the end of this month to submit suggestions for the official name of a new downtown pavilion.

Part of the city’s Destination O’Fallon initiative to attract more residents, visitors, and businesses to its aging downtown area, the pavilion is intended to “create a central gathering place in the heart of the community,” according to the city website.

When completed, the pavilion, near the corner of First Street and Vine Street, will host small festivals, gatherings, a farmers’ market, and various other events, according to city officials.

Proposed names for the pavilion are to be submitted to the O’Fallon City Council at the end of April. Name suggestions can be submitted at https://www.surveymonkey.com/r/S8H7F85. For information contact Grant Litteken at 618-624-4500, Ext. 8760 or glitteken@ofallon.org.