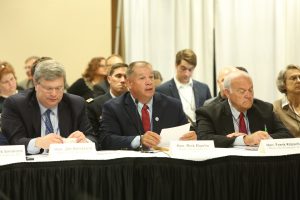 Mayors from 31 Mississippi River communities formerly called for a 20 percent reduction in plastic waste by 2020, during the seventh annual meeting of the Mississippi River Cities & Towns Initiative (MRCTI), Sept. 18-20, in Davenport, Iowa.

Grants to four river communities for environmental sustainability infrastructure projects were announced during the conference, as part of a new program that allows Mississippi River towns to propose scientifically justifiable projects online for possible funding by major charitable foundations.

Perhaps most importantly over the long run, the mayors authorized pilot projects for a new disaster recovery insurance program covering the entire Mississippi River Valley, and a National Oceanic and Atmospheric Administration (NOAA) study on the economic impact of drought and other climate-related issues across the region.

The MRCTI was established in 2012 to represent the 124 municipalities in the nine states along the main stem of the Mississippi River on political, environmental, and economic development issues.

The mayors of Alton, Chester, East St. Louis, Grafton, and Sauget, are among the organization’s 85 current members; as are the mayors of St. Louis and several nearby Missouri municipalities.

Also, joining the effort during the conference were two private corporations, Heart of America Group and Dynamic Restaurant Holdings, which operate hotels and restaurants from Florida to the Dakotas; including Happy Joe’s Pizza & Ice Cream Parlors.

“Plastics are what we refer to as a persistent pollutant. Plastics don’t break down, they simply become smaller and eventually turn into a dangerous confetti that spreads toxins and accumulates in the food chain; eventually harming all of us through the food we eat and the water we drink,” explained Mayor Lionel Johnson of St. Gabriel, La. and MRCTI Co-Chair.

Under the new water quality monitoring initiative — a joint-project with the U.S. Geological Survey (USGC), the Army Corps of Engineers, and the Maritime Administration of the U.S. Department of Transportation (USDOT) — monitors will be placed on barges, traversing the Mississippi between St. Paul and New Orleans, to check nutrient levels in the waters.

Like the plastics initiative, the monitoring program is intended to help protect the river as water source for nearby communities, as well as prevent the polluting of ocean waters.

An “hypoxia zone” in the Gulf of Mexico, off New Orleans, is believed to be 60 percent attributable to nutrients flowing out of the Mississippi River, said Mayor Johnson.

“Nutrient loading” of river waters can affect aquatic ecosystems by changing reproduction patterns for plants and marine organisms; with results ranging variously from overproduction to, in extreme cases, extinction, according to the to the Environmental Literacy Council.

It results from various agricultural, industrial, and urban activities, which generally fall into two categories: point and non-point source, according to the council.

Point source pollutants, such as a municipal or industrial waste discharges, center around a specific location. Since such discharges can often be clearly identified, they are generally easier to regulate, monitor, and treat, according to the council

Non-point source pollutants, which can include runoff from agricultural lands, are generally transported into rivers over a broad area, through watersheds and tributaries, making them difficult to identify, measure, and regulate.

The new water quality monitoring projects —the largest ever undertaken by a coalition of municipalities, federal agencies, and the private sector — will “tell us if the hundreds of millions of dollars going into conservation work to reduce nutrient loading is actually making a difference,” said Mayor Sharon Weston Broome of Baton Rouge, La.

While the new monitoring project will cover only the Mississippi River, not tributaries, conference participants see it as a step toward more extensive programs, including possible real time monitoring of pollution levels.

The database is designed to meet criteria established by a growing number of major foundations which now demand scientific justification for they fund.

MRCTI spokespersons say the planned insurance program will be developed with private insurance brokers.  Other details of the pilot insurance and NOAA disaster impact study projects were not immediately available.

“We’ve sustained a couple hundred billion worth of disaster impacts along the Mississippi River since 2005. Drought, intense heat, and flooding are our growing concerns that we need to build resilience against,” said Mayor Bob Gallagher of Bettendorf, Iowa and MRCTI Secretary.