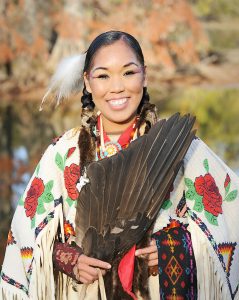 Staff Sgt. Marceline Williams, a member of the Upper Skagit Indian Tribe dwelling on the coast of Washington state, carefully puts on native attire before a dance presentation at Scott Air Force Base.

She slips on hand-stitched, rose-beaded moccasins starting with the left and then the right. Her buck-skinned dress is fastened with a leather belt and adorned with intricate bead work which took her aunt over a year to craft. Layered on her neck are colorful necklaces with little pouches, scarves and gems.

She threads otter skins through her tightly braided hair and secures them with beaded decorative wraps.  She paints berry colored stripes around her eyes, and to finish, she places eagle feather plumes in her hair fastened by a “medicine wheel” barrette.  Hidden underneath her dress is a cross “for protection.”

“I don’t know why, but I’ve always had this ritual when putting on my native dress,” said the 28-year-old.  “I think it’s just a way to focus on my presentation as I prepare to dance.  It’s quite a process to get ready, and when I have everything on it can weigh up to 25 pounds.  Dancing in this has always been great exercise.”

Born in White Swan, Wash., she grew up on the Yakama Reservation until the age of 10. Her biggest influence was her aunt, Alberta Williams of the Shoshone tribe — who loved to attend powwows.

It’s Alberta’s signature roses that adorn Marceline’s regalia, which are a testament to her skill and patience. The vibrant colors used are hallmarks of the Native American culture.

Alberta’s enthusiasm influenced Marceline’s mom, Deanna, to start taking her to local powwows when she was 4.  Powwows are celebrations of dance and song, and provides a forum where tribes come together socially for fellowship, heritage, and fun.

After the family moved to Upper Skagit as a way to expose Marceline and her three sisters to opportunities the reservation could not provide, she continued to dance through high school, often winning competitions which could net up to $700 per event.

“This became a great way for me to travel all over to larger gatherings in Montana, Idaho and the largest powwow in Albuquerque [N.M.] called the Gathering of Nations,” she said.

Even though she had a cross-country running scholarship to a state college and considered an Army ROTC scholarship, she felt drawn to the Air Force and enlisted in 2009 in the Force Support career field. Her first duty station took her to Minot, North Dakota, where the weather and loneliness can be difficult for new airmen.

“Thankfully, the base had a lot of quality-of-life programs and initiatives that helped a lot,” she said. She said her first year there was the hardest, having to work on Christmas and walking back to her dorms in the middle of a blizzard. 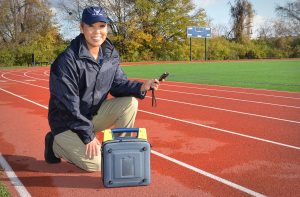 Staff Sgt. Marceline Williams, a member of the Upper Skagit Indian Tribe, is assigned to the 375th Force Support Squadron and is the NCO in charge of the Fitness Assessment Cell. (Photo courtesy of Scott Air Force Base)

“I’m trying to walk back to my dorm room in knee high snow and a dozen layers of clothes on thinking, ‘Is this my life?’”

Soon, however, she adjusted to life there working in lodging and then the dining facility, making time to attend powwows as she could.

While at Minot, her daughter, Naomi, was born.

“She’s five now and she’s attending the powwows with me.  I’m excited to pass on my heritage to her.  She’s got her own pink Minnie Mouse outfit that she loves to wear when we dance.”

Since arriving at Scott in 2014, she first worked in the dining facility and is now the NCO in charge of the Fitness Assessment Cell, where she and her team of three airmen conduct the Air Force physical fitness tests.

Upon her arrival, the dining facility was deep into planning for the holiday meals, and she said it was a challenge to develop the meal plans, order the right amounts of food, and get the right estimates of customers, for example.  But, she said, it helped shape her into the NCO that she is today.

“I plan to make the Air Force my career,” said Marceline. “I enjoy working with people and feel that I can handle a variety of situations well. Working in the Force Support career field is challenging, but also very rewarding.  For instance, recently I’ve been working with people who needed to pass their test, and I feel a great sense of accomplishment helping them to do that.”

She said that while she loves her job, she also wants to pursue being a military training instructor.  Until then she plans to keep sharing her love of dance with the base.

“Dancing at the Centennial Fall Fest was the first time I performed at any event for the Air Force, and I’d like to find more avenues to keep doing that,” she said. “I’m also happy to know two other women in the wing who are Native American. There are so few of us, so it’s kind of surprising to have us all here.  It’s great to have that fellowship because there are certain things that only you can understand as a Native American, so it’s good to have others to share that with.”

Within the Department of Defense, there are just .07 percent of the workforce identified as one of the nation’s 566 federally recognized tribes. The observance of Native American Heritage Month gives the DoD an opportunity to honor the 21,000 American Indian and Alaska Native service members and civilians.

Master Sgt. Emma Schweitzer, 375th FSS Fitness and Sports Operations section chief, said, “Staff Sgt. Williams has the ability to help join a bridge between many mixed cultures while serving in the Air Force by sharing her story. It helps create a better understanding of the well-blended micro society we all share and call home. She can help … create a better understanding of how important knowledge and respect of others is in the melting pot we reside and live in every day. Having the opportunity to share and educate others on different ethnic backgrounds helps us to understand one another, to join together as one, and be bigger, faster and stronger in … the Air Force mission.”