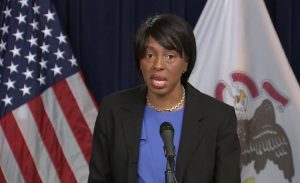 The Illinois Department of Public Health is closely monitoring a rise in cases in the Metro East region, COVID-19 region 4, as the region surpasses 7 percent positivity rate as of July 20, fueled by seven  consecutive days of positivity rate increases.

Under the plan to combat a resurgence of COVID-19 announced by Gov. J.B. Pritzker and the Illinois Department of Public Health last week, a region will automatically move to the first tier of mitigation steps following three consecutive days averaging greater than an 8 percent positivity rate.

Under the new mitigation plan announced, additional mitigation steps will be reinstated in a region following a sustained rise in the positivity rate along with either a sustained increase in COVID-19 hospital admissions or a critical reduction in hospital bed capacity.

A sustained rise in the positivity rate is defined as an increase in the seven-day rolling average for seven days out of a 10-day period. In addition, if a region hits three consecutive days of an 8 percent average positivity rate, automatic action will be required.

Randolph and St. Clair counties are currently the primary contributors to the rise in positivity rate in region 4 of the new mitigation plan, but there are concerning trends and behaviors throughout the region, which also includes Bond, Clinton, Madison, Monroe, Randolph, and Washington counties, according to the IDPH.

Several of these counties also border and are home to residents who travel frequently to Missouri where less stringent mitigations have been in place.

Public health officials said they are also concerned with reports of large gatherings without social distancing taking place in the region. Specifically, Hidden Lake Winery in Aviston is reported to have hosted several large events, contrary to public health guidance.

The Department of Human Services is working closely with local health departments and officials to help prevent further spread and keep residents and staff safe.

“Businesses that disregard public health guidance are putting themselves and their communities at risk and threatening the progress we’ve made for the vast majority of businesses that are safely reopening,” said Pritzker. “I urge county and local officials in the Metro East region to take action in response to those who refuse to help keep people safe and to consider broader mitigations before the state is required to take action. As I’ve said, local officials are our first line of defense when it comes to concerning trends in their communities, but IDPH is ready to take immediate action if the data requires it.”

“This virus is still out there and it is the responsibility of all of us, local officials, businesses, and every day Illinoisans, to take the actions we know will keep people safe,” said IDPH Director Dr. Ngozi Ezike. “We know from the data that large gatherings and groups of people in confined closed spaces can lead to a spike in cases, and we have seen some examples popping up right now. IDPH will work closely with our local health department partners to respond to these concerning trends and will not hesitate to restore mitigations to prevent a full resurgence of COVID-19.”