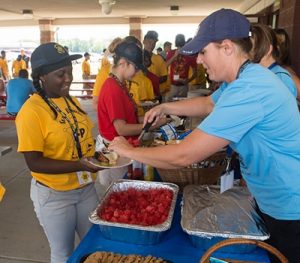 Coordinated by Illinois State Police (ISP) and hosted in partnership with SIUE Police and other Metro East agencies, the 14th annual residency program was held from July 15- 21. Nearly 60 cadets from across the region participated.

According to the ISP, “Team Illinois Youth Police Camp is a highly structured weeklong residency program, which addresses today’s teenagers who are under many societal pressures. The camp is based upon a military model of discipline and includes para-military drills, physical fitness exercises and classroom instruction on drug abuse resistance, team building principles and other life-enhancing skills.”

Four SIUE Police female officers volunteered as leaders and mentors for the entirety of camp. On July 20, the cadets visited SIUE’s campus for an interactive day that included bowling at Cougar Lanes and a BBQ prepared and served by SIUE Police. 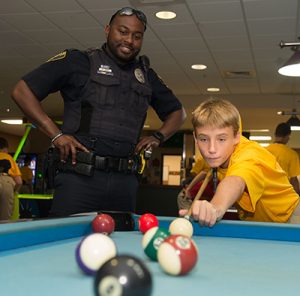 “This is an incredibly active camp,” explained SIUE’s Lt. Lisa Johnson. “Usually, by the end of the week many of the teens say they’re interested in a police career. They don’t always come in feeling that way. These kids have different backgrounds and not all of their interactions with police have been positive. We are here to show them the other side of what we do, and educate them on the positive impact they can have in life.”

“This camp couldn’t function without the great participation and support we receive from SIUE Police,” Dye said. “Chief Schmoll never lets us down. He sees the value of this wonderful camp and the impact these experiences have on our youth.”

“The SIUE Police Department is progressive in its hiring processes, and our camp and cadets have reaped the benefits of the foundation the department has set,” added Watson. “We also have other amazing community volunteers who want to be a part of something worthwhile, like this camp.”

Team Illinois Youth Police Camp teaches a set of life skills that will help kids grow and develop as emerging leaders. Watson says those skills begin with courteous and respectful behavior. Cadet Valerie Huston, of Mount Vernon, says she has benefited from those lessons. 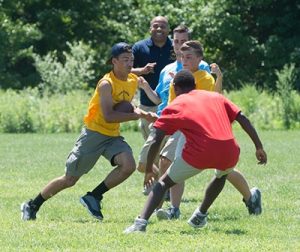 Leaders and cadets enjoyed a friendly game of football while visiting SIUE’s campus on Friday, July 20. (Photo courtesy of SIUE)

“It’s a good opportunity to be here,” the 16-year-old said. “Most kids don’t get this chance. I don’t regret coming, because it’s a fun place to be.”

“When we’re here, we’re all family,” Hutson continued. “Family works together. You have to push your way through challenges and cheer each other on. At camp, if you do what you’re told to do, you will have the fun that you want to have.”

Darrell Perryman, a 14-year-old cadet from Swansea, agrees it takes personal effort and teamwork to succeed.

“I want to join the military someday, so I thought I’d try this camp,” Perryman said. “We’ve gone fishing and done physical training drills and teambuilding activities. You have to strive for and achieve things that you’ve never done before. It’s been fun to work together.”

SIUE senior Cynthia Holten, of Shiloh is slated to graduate with a bachelor’s in criminal justice studies in December 2018. The camp mentor says her passion for being a positive influencer in law enforcement was ignited when she attended Team Illinois Youth Police Camp at the age of 15.

“This camp made a huge influence on my life,” Holten said. She has completed an internship with ISP and aspires to become a state trooper.

“My mentors had a big impact on me and changed my perspective on a lot of things,” she added. “I want to serve and protect and help those that need a little more guidance in life. I would like to make a difference in my community and across the state.”