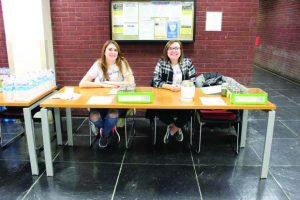 Accepting donations for homemade pickles are From the Ground Up Co-Presidents Catherine “Cat” Akley (right) and Shea Walker. (Photo courtesy of SIUE)

Members of Southern Illinois University Edwardsville’s new sustainability group, From the Ground Up, want to inform the public about the journey, process and environmental journey product takes from farm to table.

“People are becoming more aware of what they put in their bodies,” said Shea Walker, co-president with Catherine Akley of SIUE’s From the Ground Up. “We want to spread awareness with what happens with your food, but on a large agricultural scale. We also want to stress the bioeconomy of farming.”

Walker and Akley, both seniors double majoring in biochemistry and fermentation chemistry, have been co-presidents since From the Ground Up was formed in April 2018. Robert Dixon, Ph.D., associate professor in the department of chemistry, is the group’s faculty advisor.

“The club started as a result of Dr. Dixon saying what was needed was for people to have a more agricultural approach and idea of sustainability as it relates to our food,” said Walker. “He also thought it would be extremely beneficial to partner with NCERC at SIUE.”

From the Ground Up meets at the Biotechnology Incubator Lab (BIL) on campus, next door to NCERC, at 6 p.m. on Mondays.

“From the Ground Up connects students with education, research and career opportunities in the bioeconomy — specifically in the environmental and agricultural sciences, food and beverage sciences, and fermentation sciences,” said Dixon. “By bringing students together to work on service and learning projects, hear from experts in the field, and help bring awareness to agriculture and environmental issues at SIUE, From the Ground Up helps connect students to their future careers and to each other.

“We all know that what is taught in the classroom is only one part of the educational experience, and From the Ground Up is an avenue to get out of the classroom and into the field.” 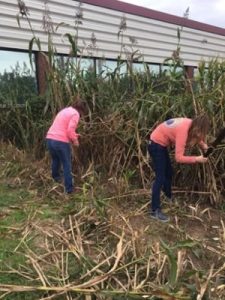 The student group addresses current concerns about food and the environment such as GMO’s or genetically modified organism and roundup ready corn, noted Akley.

“GMO is just a fancy way of saying someone has altered the food in some way to make it better, more attractive, produce more or last longer,” said Walker. “For instance, you can take a gene from one plant that has a resistance to a certain kind of bug, and put it in another plant, so the bugs won’t eat that plant.”

“A large majority of foods, fruits and vegetables are genetically modified,” added Akley.

Roundup ready corn has been genetically altered, so the corn can digest roundup herbicide. “By doing so, there is less herbicide run off,” noted Walker. “However, everything that happens in a field is extremely important, because it affects the food, people, the land and the environment.”

One major project that the group has had success with is the Feedstock Diversity Showcase at NCERC.

“We are excited about the second year of the Feedstock Diversity Showcase, which was a big hit with students and guests last year,” recalled Dixon. “It’s one thing to talk about the bioeconomy, it’s another thing to watch the feedstock’s that are later converted into biofuels and biomaterials growing in front of your very eyes.

“In early April, we also will break ground on a project to grow hops in front of the BLI, which provides a great teaching environment for multiple aspects of agricultural and fermentation science,” he added. “In the future, we also hope to start a grape vine.”

“Beyond the planting projects, we are looking forward to growing our membership to include more students from the social sciences and humanities,” Dixon pointed out. “One of the most powerful ways students can grow is by working together with their peers from different disciplines, who approach problems and issues from different perspectives and with different tools.”

For more information about joining From the Ground Up, contact Walker at swalkaa@siue.edu or Akley at cakley@siue.edu.