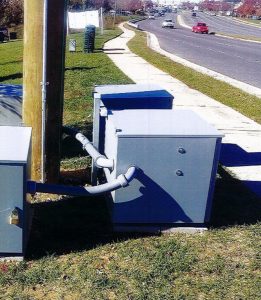 A small cell installation. Some Metro East municipalities say that bringing the next generation of communications technology to Illinois will give the wireless industry unrestricted use of public property and freedom from local regulations. (Photo courtesy of National Association of Counties)

Small cell nodes are about to become as common as telephone pole and fire plugs in communities across America –immediately bringing with them enhanced cellular telephone service and ultimately an “Internet of Everything,” according to observers of the wireless communications industry.

However, a growing chorus of Metro East municipalities contends that to bring the next generation of communications technology to Illinois, the wireless industry wants unrestricted use of public property, freedom from local regulation, and a ride on the back of taxpayers.

The Small Wireless Deployment Act (Senate Bill 1451), approved by the Illinois General Assembly in November, is designed to facilitate the introduction of so-called “next generation mobile networks” (also known as “fifth generation mobile networks,” “fifth generation wireless systems,” or simply “5G”) across the state, by relieving regulatory burdens and lowering cost for the installation of “small cell” technology.

The next generation technology would immediately improve the quality and reliability of device-to-device (cell phone) service, and ultimately lay the groundwork for the widely heralded “Internet of Things” including machine-to-machine communications for industry, autonomous vehicles, and “smart cities” with fully coordinate traffic management and other automated systems.

The installation of small cells nodes —low-powered cellular radio access units – on utility poles and other appropriate locations is key to development of 5G system, industry experts say.  With a more limited range than today’s conventional cell towers – typically just 10 meters to a few miles – the smalls can make more efficient use of the bandwidth available in the service areas.

However, the cell industry complains that implementation of the 5G system is being impeded across the nation by counties, municipalities, and villages, which generally require permits for utility installation, as well as lease payments when those installation are on publicly owned property.

The Small Wireless Deployment Act, finalized by Illinois lawmakers in Nov.  8 with the support of the cell phone industry, would exempt small cell installations from virtually all permitting requirements imposed by cities, villages or townships. It would also limit lease fees charged by local government entities for right-of-way to well-below market rates.

Municipal officials counter the legislation would effectively give cell companies a monopoly of the use of public lands and require government to lease space on utility poles or on public lands at below the cost of acquiring and maintaining those properties. 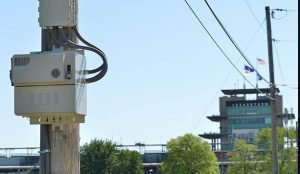 Gov. Bruce Rauner has not yet publicly indicated whether he intends to sign it.

Aesthetic concerns are commonly voiced by municipal officials considering small cell installation, according to Ken Schmidt, present of Steel in the Air, a Baldwinsville, NY consultancy that assists government entities and private parties in contractual negotiation with cell phone companies.

Moreover, once a small cell is installed, it can easily be expanded with additional equipment – perhaps reaching the size of a full cell tower, he warns.

However, many cash-strapped Illinois cities may have a more practical concern.

The wireless industry often characterizes any request for cost reimbursement or rents by a municipality as a “money grab,” according to Schmidt.

“To argue that municipalities are money grabbing by charging a reasonable price for access to publicly-funded infrastructure by for-profit entities is disingenuous at best,” Schmidt observes on his company website.

The cell phone industry generates roughly $60 billion in profit per quarter, according to Schmidt.

Assuming construction of 20,000 new small cell antennas a year, and an average municipal utility pole lease fee of $3,000 year, the wireless industry in total would shell out only $60 million lease fees to municipalities annually — or less than 0.1 percent of their annual profit, Schmidt says.

The industry spent about half that amount just lobbying for deregulation legislations such as the Small Wireless Deployment Act during 2016, he adds.

In fact, in many cases, small cells installation may not be necessary at all, Schmidt maintains.

The benefits of many advanced Internet applications can already be realized using current technologies, he says.

And while the wireless industry claims small cells are a key step toward smart city systems and self-driving cars, mobile video will actually be the primary use of small cells both now and in the future, Schimdt says.