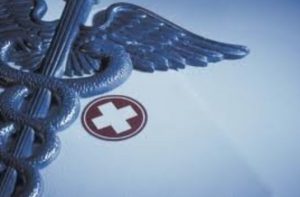 The annual Robert Wood Johnson Foundation rankings evaluate counties based on health “outcomes” for residents and on general conditions in the environment. Among these are longevity, unhealthy personal behaviors, economic status, and access to care. (Photo courtesy of Monroe Co. Health Dept.)

Residents of Monroe County can take some pride in their health and good living.

The county is the fourth healthiest in Illinois, according to the Robert Wood Johnson Foundation’s 2018 “County Health Rankings & Roadmaps” report, issued March 14.

Clinton County also continues to be among the healthiest in the state, ranking eighth in the annual survey.

However, St. Clair County continues to be among the unhealthiest places in Illinois; ranking 94th among the state’s 102 counties.

Madison County is ranked the 71st healthiest in the state.

DuPage County, a collar county of the Chicago metropolitan area, is rated the healthiest county in the state.  Alexander County the southernmost county in Illinois, ranks last in the health survey.

The annual rankings evaluate counties based on health “outcomes” for residents and on general conditions in the environment of a county that can affect health.

Although “outcome” is generally used in healthcare literature to describe the result of treatment following a specific incident of illness or injury, it is used in the survey as a classification for overall indicators of health for specific individuals.

Those include longevity, unhealthy personal behaviors, economic status, and access to care.

Monroe County ranks fourth in Illinois for health outcomes; with county residents, on average, enjoying the 12th longest length of life in the state and the third best quality of life. The county ranks second in the state for health factors; with residents ranked 17th in the state for healthy behaviors (i.e.: absence of smoking, alcohol use, obesity); seventh for clinical care (such insurance coverage and healthcare provider-to-resident ratios); and first in social factors related to health (poverty, violent crime).

The county beats state or national averages in most of the nine factors tracked related to health; although the report found a higher than average incidence of deaths caused by injuries.

However, Monroe County ranks 95th in the state for physical factors that can affect health; with researching citing a slightly above-state-average levels of particulate air pollution, lengthy commutes and driving alone (a potential factor in auto accidents), and violations for federal drinking water standards. 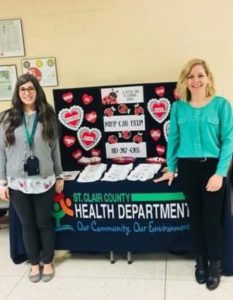 St. Clair County recently held a Maternal Infant Health Program as part of its Parent University program. Despite such community outreach efforts, St. Clair County continues to be among the unhealthiest places in Illinois, according to the Robert Wood Johnson Foundation. (Photo courtesy of St. Clair Co. Health Dept.)

St. Clair County, on the other hand, ranks 94th in the state for health outcomes. Researchers ranked the county 89th for longevity and 97th for quality of life. The county ranks 93rd in terms of health factors. Only two of the state’s 102 counties have higher rates of unhealthy behaviors.

The county country ranks 56th in the state for clinical care factors. Though home to several hospitals and numerous medical offices, provider-resident ratios remain below Illinois averages and the nation’s healthiest areas. Diabetes monitoring and mammography screen rates remain somewhat below those for national models and state averages.

The county ranks 81st in terms of social and economic factors related to health; with high rates of childhood poverty, violent crime, and injury-related death.

It ranks 87th in the state for physical environment related to health with the report citing a high rate of motorists driving alone.

Madison County ranks 71st in health outcomes; with the 73rd longest average lifespan in the state and the 70th best quality of life. The county ranks 64th in terms of factors affecting health; with residents ranked 75th for healthy behaviors.

The 2018 report is based on the most recent available full year data, compiled for the year 2016.