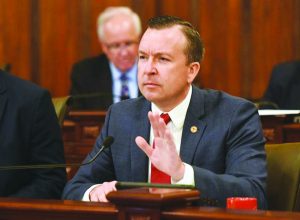 Business and political leaders from across Metro East made cases for a range of projects — from building updates on college campuses to refurbishing of rural roads — during the second of six planned hearings on a proposes major statewide infrastructure program, March 4, at Southern Illinois University (SIU) Edwardsville.

Alternately referred to as the “capital improvements,” “infrastructure” or simply “state spending” plan, the envisioned program is generally expected to help fund billions of dollars in public work across the state — with the goal of spurring long-run and short-term economic activity.

Patterned after the 2009 Illinois Jobs Now (IJN) bill — which authorized some $31 billion in capital spending across the state — the proposed new infrastructure program was a key component of Gov. J.B. Pritzker’s election campaign.

St. Clair County officials were among his earliest supporters, reasoning the capital improvements program could be particularly beneficial to Metro East.

The federal infrastructure program is said to be favored by President Donald Trump and lawmakers in Congress, though the White House has yet to roll out a developed infrastructure plan to present to Congress.

But, project funding will come with a local matching share requirement.

Roughly 110 people turned out for the Southwestern Illinois area’s public hearing on the proposed program; jointly convened by the Illinois Senate’s Transportation and Appropriations committees, and co-chaired by State Sens. Andy Manar (D-Bunker Hill) and Martin A. Sandoval (D-Chicago).

Revival of the long-planned Southwest Illinois Connector project was among the initiatives proposed during the hearing’s opening panel presentation on area roadway improvements. The proposed $400 million, four-lane highway from Carbondale to Metro East highway would run largely through rural areas; terminating near Waterloo, according to Randolph County Commissioner Marc Kiehna, chair of the Southwest Illinois Connector Task Force. 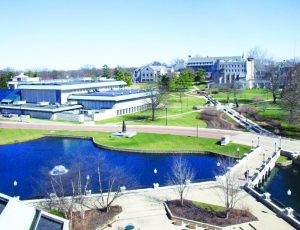 Also proposing highway projects during the opening segment of the hearing were Paul Loete of the Illinois Department of Transportation and Wood River Township Highway Commissioner Mark Gernigin.

In addition to improving college facilities, “cranes on campus” sends a valuable message to surrounding communities, according to a briefing paper submitted by the panel suggested.

Tim Sullivan of SIUE’s Economics and Finance Department and Kyle Harfst of SIUC’s Southern Illinois Research Park outlined a capital improvement plan would affect the two universities; however, specifics of the program were not made readily available after the meeting.

A $2,000 request to cover HVAC replacement, signage improvements, fence repair, LED lighting upgrades and other permanent equipment at the East St. Louis Higher Education Center was officially submitted during the hearing by the Illinois Community College Board.

During a final segment on municipal interests, East Alton Mayor Joe Silkwood, Fairmont City Mayor Michael Suarez and Wood River Mayor Cheryl Maguire called for small cities and towns to be included in the infrastructure program; noting many Metro East towns are home to business and industries which are now threatened by deteriorating road conditions.  Too often small towns have been left out of public works legislation, they said.

Alton Mayor Brant Walker, Granite City Mayor Ed Hagnauer and Edwardsville Mayor Hal Patton were scheduled to take part; but were unable to be present during the hearing’s final session.

Of the original $13 billion in state bonded appropriations authorized under Illinois Jobs Now!, an estimated $3.4 billion remains unexpended, according to state summary sheets provided during the hearing.

Administrators are concerned about a potential net shortfall of $1.7 billion in the state’s bond funds, which could require Increases to and reallocations of existing bond authorization, according to financial summary documents provided through Sen. Manar’s office.

During the hearing, Sen. Sandoval repeatedly pressed witnesses on possible ways to increase state revenues and thereby cover increased financial obligations that would be incurred under the infrastructure program.

A progressive income tax and a motor fuel tax increase are among the measures being considered in Springfield.

He said he hoped to see an infrastructure bill passed prior to the General Assembly annual spring break in May.

The next public hearing on the proposed infrastructure program is set for 1 p.m. Monday, March 18 at the Decatur Public Library.

Three final hearings are scheduled in Peoria, Chicago, and Elgin during April.