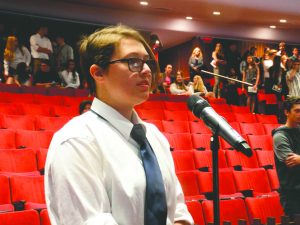 Sierra Misselhorn, a student from Althoff Catholic High School in Belleville, asks questions of attorneys that were involved in two cases that the Illinois Supreme Court heard Wednesday when it met at Lewis and Clark Community College in Godfrey. (Photo by Peter Hancock/Capitol News Illinois)

GODFREY — High school and college students in the Metro East area got a rare chance to see the Illinois Supreme Court in action Wednesday when the court traveled to the campus of Lewis and Clark Community College in Godfrey to hear two cases.

John Lufton, who directs the Illinois Supreme Court Historic Preservation Commission, explained at the outset that it’s something the court has done periodically for the past five or six years. He described it as “riding the circuit,” a phrase that harkens back to Illinois’ early years when judges would travel from town to town within their circuit to hear cases.

“I think it’s a great opportunity for the court and for the people that are here,” Chief Justice Lloyd Karmeier said in an interview with Capitol News Illinois before the hearing. “In fact, my old high school has been invited to have students here, and the high school where my granddaughters attend is here. It’s a great opportunity for the students that are here.”

For those who attended Wednesday’s session, it was also a chance to learn about the difficulties of adapting the state’s legal system, including both criminal and civil law, to the internet age.

The first case involved Conrad Morger, who was sentenced to four years of probation after being convicted in McLean County of two counts of sexual abuse against a minor. As a condition of his probation, Morger was prohibited from accessing any social networking sites during the term of his probation.

His attorney argued that violated his First Amendment right of free speech and impeded his ability to seek employment as part of his rehabilitation. But attorneys for the state called it a reasonable condition intended to prevent Morger from offending again during his probation.

The second case involved Colin Dew-Becker, who is attempting to recover $100 he lost in an online wager playing in a daily fantasy sports competition on the website FanDuel. Dew-Becker is basing his claim on a state law that dates back to Illinois’ territorial days known as the Loss Recovery Act, which allowed people to reclaim money they had lost in illegal gambling operations.

In that case, attorneys for the state argued the authors of the law could not possibly have envisioned how it would apply in the age of internet gambling. But Dew-Becker’s attorney argued the General Assembly has had ample opportunity to either amend or repeal the law but has chosen to leave it on the books, even during the most recent legislative session when lawmakers legalized sports wagering.

Both cases prompted plenty of questions from students who have grown up in the digital age, and after the hearing they were given a chance to ask those questions to the attorneys who had just argued before the court.

One of those came from Noah Stuckel, a sophomore at Belleville West High School, who asked, “Do you guys expect the rulings of these cases to be used in the future to define cyberspace and what is allowed there and what’s not?”

“Yeah, I think they will. That’s called precedent,” said Zachary Rosen, the attorney who argued on behalf of Conrad Morger. “When a case comes out with an opinion, we’re going to turn back to that case years down the road and say, ‘What were the justices talking about? What were the facts of that case and how can I apply them to the question I have in the next case?”

Sierra Misselhorn, a student at Althoff Catholic High School in Belleville, asked specifically about the Morger case, wanting to know what kinds of websites the attorneys thought a convicted sex offender on probation should be allowed to access.

But neither attorney in that case was willing to delve into those kinds of issues.

“Obviously I think the law is unjust as it is and the state has a duty to defend the law, whether or not (the state’s attorney) personally agrees with the law or not,” Rosen said.

Karmeier said the practice of sending the court on the road once in a while helps elevate the profile of a branch of government that often doesn’t get the same kind of publicity as the legislative or executive branches.

“When people know, I think they have less fear of the branch and what we do,” he said. “When we cloak ourselves in secrecy, I think they wonder about it, so this is an opportunity for everyone.”