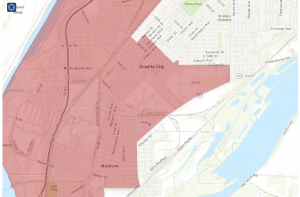 A dozen economically depressed Metro East census tracts have been designated “Opportunity Zones” (OZs) by the U.S. Department of Treasury.

Established under the Federal Tax Cuts and Jobs Act of 2017, opportunity zones are intended to spur private, tax-free investment in the nation’s lowest-income areas — a concept known as targeted “impact investing.”

Most of the Metro East opportunity zones are concentrated in a large, contiguous swath of Madison and St. Clair counties along or near the Mississippi River; extending from Alorton north through Downtown East St. Louis, Brooklyn, Venice, and Madison to the western section of Granite City.

In outlying areas, massive new opportunity zones in Clinton and Jersey counties could also have an impact on the Southwestern Illinois economy.

The Metro East tracts are among the 327 Illinois opportunity zones that were formally announced by Gov. Bruce Rauner on May 18.

Under the nation’s new tax reform law, taxpayers can defer tax liability for capital gains by investing those profits in real estate development, or related projects, located in low income census tracts (LICs) that are designated by the U.S. Treasury as qualified opportunity zones (QOZ).

Census tracts were selected for OZ program, based on a three-phase approach; designed to identify need and potential, ensure adequate representation for the entirety of each state, and consider local input, according to the Treasury Department.

Phase one involved “need-based indexing:” based on factors such poverty rates (specifically among children), unemployment rates, crime rates and population. Statewide, some 1,305 Illinois low-income census tracts were found to qualify for the program. 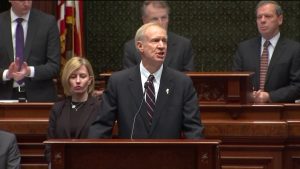 Gov. Bruce Rauner announced last month that 327 Opportunity Zone census tract recommendations submitted by the state of Illinois have been approved by the U.S. Treasury Department. The zones cover more than 85 counties throughout the state. (Photo courtesy of Illinois Manufacturers Assoc.)

Rauner could then nominate 25 percent of them for designation as QOZ — with the stipulation that, to ensure statewide benefit, any county with one or more qualifying tracts received at least one zone. Towns and cities across are limited on the number of zones they can have.

Comprising the chain of opportunity zones in the American Bottoms section of Madison and St.  Clair counties are:

Granite City Census Tract 17119400200 — Encompassing the largely industrial and commercial western section of the city. The tract is bounded approximately by the Mississippi River/Chain of Rocks Canal on the west, West Pontoon Road on the north, Illinois Route 3 (Great River Road) or Century Drive on the east, and the city limit line on the south;

Granite City Census Tract 17119404000 — Covering much of the city’s central commercial and residential area around Niedringhaus Road.  The tract is bounded roughly by Century Drive on the west, 23rd Street on the north, Ill. 203 (Edwardsville Road) on the east, and the Alton Southern rail tracks to the south. The area between McCambridge Road and Illinois Route 203 in the city of Madison also included.

Madison Census Tract 17119400600 — Covering then bulk of the city, the tract is bounded by the Alton Southern rail tracks on the north, McCambridge Road on the east, the Union Pacific rail line on the south the Venice city limits on west.

Venice Census Tract 17119400700 —Covering the majority of the city, the tract is bounded by the Mississippi River on the west, the North Venice area on the north, Illinois Route 203 on the east and the Madison/St. Clair counties line on the south.

East St. Louis Census Tract 17163504500 — Centering around Downtown East St. Louis and the area’s I-55, I-64, and I-70 corridors and interchanges, the V-shaped tract also includes the entirety of Brooklyn and the now-unincorporated National City area (including the former National Stockyards grounds), on the north, and a patch of land extending southeast to the St. Louis Terminal Railroad rail yard near Alorton.

The tract is bounded by the Mississippi River on the west, the Madison/St. Clair county line on the north, a zig-zag line extending from the Gateway Golf Links to Market Street/Bond Avenue on the east, and the Sauget village limit line on the south.

Alorton Census Tract 17163502700 — Encompassing most of the village, the rectangular tract is bounded by the edge of the Terminal Railroad yards on the west, the area along Market Street to the north, 50th Street or 51st Street on the east, and the Canadian National Railroad tracks on the south.

Also designated at an opportunity zone is Madison County is Alton Census Tract 17119402200, covering much of the city’s north and west central areas. The tract is bounded by Alby Street on the east, West Ninth and Holland Avenue on the west, the extension of West Ninth on the south, as well as East Delmar and Chouteau avenues on the north

Also designated in East St. Louis is a largely residential area in the central portion of the city. Census Tract 17163501300 covers a section north of Holton State Park, centering roughly around Marybelle Avenue and including a section I-255. It is bounded roughly by the State Street area on the south, St. Clair Avenue area on the north, 38th Street on the west and North 76th Street on the east. An area south of State Street, from 69th Street to the Shipley Lane/East Glenwood Avenue area is also included.

Washington Park Census Tract 17163500500 covers much of the Emerson Park area, near the town’s MetroLink light rail station.  Long targeted for development, the zone includes the Rose Park and western Rosemont area.  It extends from the CSX Railroad tracks near Schoenberger Creek on the north, to the area around 38th and 37th streets on the west, Bunkum Road on the south, and 45th or 47th street on the east.

Also, designated an opportunity zone in St. Clair County, an area of western Belleville along South Belt West (Ill. 13) that has long been targeted for development. It includes the Belleville Crossing shopping complex. It is bordered by Frank Scott Parkway on the west, Illinois Route 15 on the south, the Centreville Ave. area on the east, and the Norfolk Southern Railroad tracks on the north. It also extends into the Pleasant Hill Park area.

In Clinton County, the new opportunity zone in Census Tract 1702790040 coincides with an area long targeted for development. The zone encompasses the eastern shore of Carlyle Lake, the nearby communities of Huey and Prairie Creek, and most of the northern section of Centralia.  The zone extends as far as the Marion and Fayette County lines.

In Jersey County, the new enterprise zone in Census Tract 17083010402 encompasses most of the Meadow Branch Ridge area. It lies to the west of the planned site of a new international freight hub, announced recently by the Kansas City Southern Railroad. The zone lies east of Jerseyville; extending west to within a few miles of the Mississippi River. It runs from just north of Grafton on the south to the Greene County line on the north.