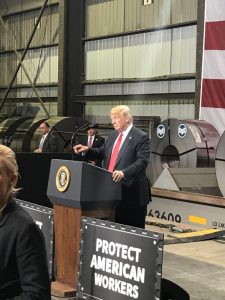 “The beautiful blast furnaces of Granite City are shining brightly again,” Trump told several hundred plant workers and a smattering of invited guests during a midafternoon speech in the steel plant’s coil warehouse.

Long a Metro East landmark, the plant commonly known as Granite City Steel has been frequently cited by both the White House and the news media over recent weeks as an example of economic revitalization under Trump administration policies — including controversial trade tariffs.

Nearly all operations at the Granite City facility were suspended in 2015 amid declining demand for U.S. rolled steel products; with nearly 1,000 workers laid off.

U.S. Steel and the Trump administration blamed “dumping” of steel in the U.S. at below-market prices by foreign producers such as China and Korea.

The plant was reopened in March of this year after President Trump announced a 25 percent tariff on imported steel. Some 800 workers have so far been recalled.

Steel dumping had a “devastating” effect on the steel industry overall “and on Granite City,” President Trump said.

The shutdown was severe economic blow to Granite City, municipal officials say. A special study following the shutdown found half of all economic activity in the town was related directly or indirectly to the steel industry.

Joining the president briefly on stage was U. S. Steel President and CEO Dave Burritt who vowed to work for a continued resurgence in the American steel industry.

President Trump cited the Granite City Works as just one example of steel mills that are now reopening across the U.S.

Also called by the president to the podium were four long-term Granite City Steel employees, including Patricia Bertrand.

“It was hard driving by (the steel works) while it was closed,” Bertrand recalled.

“It was numerous friends of mine that lost their job and it was really devastating for people to lose what they did,” said Paul Krause, a nearly 30-year employee at the Granite City Works.

The president’s Granite City appearance — and the “Start Up, Stay Up” slogan chanted by works while waiting for his address — was intended to shore up support for tariffs amid increasing criticism.

Republican Gov. Bruce Rauner did not attend, citing an appearance in Metro East just a week prior.

The crowd of enthusiastic workers stood through the entirety of the Granite City address, the president noted.

Prior to the speech, supporters — some with supportive signs or banners — lined much of the president’s motorcade route through Granite City to the steel plant.

The Collinsville-based progressivist group, Action Metro East organized a protest counter-rally in Granite City’s Civic Park an hour prior to the president’s 2:30 p.m. address; drawing about 200 critics of the administration.

The rally featured a large, inflatable chicken designed to look like the president.

President Trump’s visit last week was the first by a sitting president to Metro East since 2005 when President George W. Bush spoke in Collinsville.