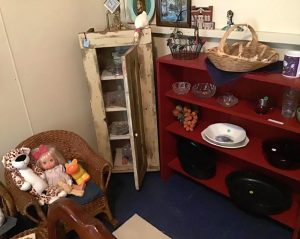 Visitors to downtown Chillicothe likely have noticed a colorful treasure chest standing where a longtime thrift store used to be.

It’s still the same shop, but Childers Sales has changed its name to Looking 4 Treasures after hiring a local artist to paint a brightly colored whimsical treasure chest on the front of the building at 806 N. Second St.

Artist Luke Kinzler of Pekin spent about 40 hours first drawing the scene on the building and then spray painting it, Childers said. She took advantage of the city’s facade program that paid 80 percent of the cost.

Facade grants of 80 percent of a project’s cost up to $5,000 are available to businesses in the city’s two tax-increment financing districts and 80 percent up to $2,500 for businesses outside the TIF areas, according to economic development director Amanda Beadles.

Eligible costs include restoration of existing facades; removal of window air conditioners, grills or signs not appropriate for the building; masonry cleaning and repair; repairs or replacement of siding, windows, doors, awnings and light fixtures; painting; and shutters or other design elements.

“Is it gaudy? Yes. But does it bring in business? Yes,” said Childers of the new mural on her building. “Since I’ve had the building painted, it pops out. People are interested.”

Childers, a Pennsylvania native and former beautician, decided to change the store’s name to match the décor and also because people often misread the sign as “Children’s Sales.” 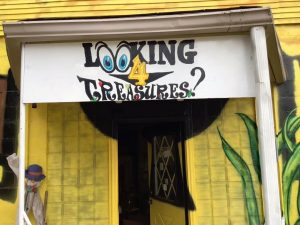 Artist Luke Kinzler of Pekin spent about 40 hours painting the front of this Chillicothe thrift store to look like a treasure chest. Shop owner Dawn Childers changed the store name from Childers Sales to Looking 4 Treasures this summer. (Photo courtesy of Dawn Childers)

A grand reopening is being planned, though the date hasn’t been decided yet, after which Childers plans to hide a treasure chest somewhere in the store each week that will entitle the finder to discounts or treasures inside the chest.

“If it doesn’t get found within the week, we will add more things to the chest,” Childers said. “We want to make coming to Looking 4 Treasures fun, as well as saving money at the same time.”

Childers’ late husband, Troy Childers, Sr., a former city alderman and mayor of Chillicothe for more than 30 years, bought the building around 2005 and opened a used furniture and appliance store. After he died in 2016, Dawn Childers decided not to carry major appliances and to focus instead on used furniture and other items.

“We get a lot of repeat customers and people from out of town, but how I manage to keep my doors open is I have an  (online) auction twice a week,” said Childers, who also rents the back of her building to an auto shop and rents out a basement apartment.

“We post things for sale that we have in the store, as well as a starting bid that varies depending on what the item is,” Childers said. “Sometimes we do furniture or sports items or tools or decorations. It can be anything, really.”

About 42 items are put up for auction each week, with most items going for $5 to $10. Winning bidders must pick up their items within two weeks, which gets shoppers into the store, Childers said.

“My philosophy is get it in, mark it and get it out. When you come to the store, I don’t want you to see the same item again and again,” she added. 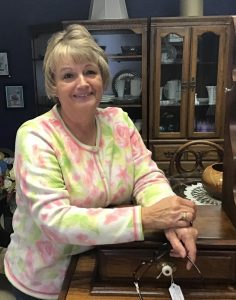 Dawn Childers stands in her Chillicothe thrift store, which she recently renamed Looking 4 Treasures. Long known as Childers Sales, the store at 806 N. Second St., was started about 14 years ago by her late husband, Troy Childers, who served the city as both an alderman and mayor for more than 30 years. (Photo courtesy of Dawn Childers)

Childers buys used items that people bring in and acquires things through estate sales. She occasionally sells items on consignment but prefers to buy things outright. When things are donated to the shop and then sold, she donates the proceeds to Chillicothe’s annual Shop with a Cop charity.

Among the more unique items Childers has found over the years was a letter written in the ’40s by comedienne, singer and actress Fanny Brice to a bank, which had been taped underneath a chest of drawers.

“I ended up keeping that and displaying it here for the longest time,” she said. “We’ve also gotten rocks that were supposed to be meteors, and we’ve had some really cool pocket knives that we’ve sold in the past.”

Among items that customers seem to snap up quickly are anything related to the Chicago Cubs or the Chicago Bears, she added.

Childers said her favorite parts about running the business are living right next door and interacting with her customers.

“Since my late husband passed, I know life is short and so I want to make memories that will not only last my lifetime, but for my family and friends as well. Being a small business owner, I like to greet my customers and get involved helping them find their treasures at my store. I can’t dwell on the past but can only move forward with my life,” she said.

Looking 4 Treasures is open 10 a.m. to 5 p.m. Tuesday through Friday and 9 a.m. to 1 p.m. on Saturdays. For more information, visit the store’s Facebook page or call 30