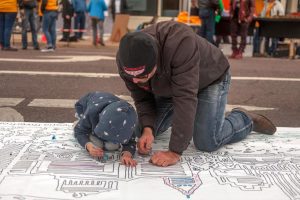 The arts are playing in Peoria, and Doug and Eileen Leunig want the world to know about it.

The couple, both artists, spoke about their mission to make Peoria an international arts destination at last week’s Drinks & Dialogue event hosted by the Greater Peoria League of Women Voters.

“Some people say why do we care if Peoria is an international arts city? We care because it puts money back into the city, and it brings joy to people’s lives,” Eileen Leunig said.

Jenn Gordon, executive director of ArtsPartners of Central Illinois, provided statistics from an arts economic prosperity report that ArtsPartners prepares every five years with help from the Illinois Arts Council and Americans for the Arts.

Last conducted in 2015, the report shows 73 percent of Americans believe the arts are a “positive experience in a troubled world.”

“In Illinois the arts are a $4 billion industry that supports 111,068 full-time equivalent jobs, which is really remarkable,” Gordon said.

In the Greater Peoria area alone, the arts is a $20.4 million industry that supports 850 full-time equivalent jobs and delivers $2.2 million in local and state government revenue, she added. Statistics show that nearly $16 is spent locally per person per event above the cost of a ticket on things such as local transportation, souvenirs and gifts, lodging, meals and snacks, clothing and childcare.

“It’s not just a feel-good story. The arts are a huge part of our culture here in Peoria and it’s part of contributing to the economic vibrancy of the area,” Gordon said. “Just imagine if we got rid of the Peoria Civic Center or Corn Stock or Peoria Players and the impact that would have on the economy.”

The group is focused on putting up public murals and art to enliven buildings throughout the city, sponsoring an annual public arts street and film festival, and creating arts education opportunities for all ages. 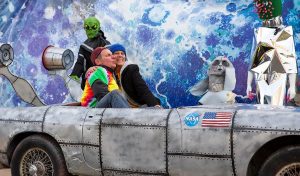 “Art used to be part of the school system but there’s been a lack of interest in that,” Doug Leunig said. “The real value of arts in education is that it’s fun, it feeds the soul and it’s something kids don’t get normally in classroom situations.”

He added that art teaches the 21st century skills of critical thinking, collaboration, creativity and communication. “Those are skills kids can learn while having fun that they will carry into any job they have in the future,” Doug Leunig said.

Through funding raised in part at the first Big Picture Street Festival last October, the group has hired artists to work with kids in after-school programs and community centers.

The goal is for kids to be able to work directly with artists and to be able to pay artists a livable wage,” Eileen Leunig said. “We provided over 100 hours of arts education last year in classes that ranged from 7 to 30 kids.”

Doug Leunig said Arts Alliance Illinois has come up with a plan to get the arts integrated into the educational system. “It is not yet mandated, but it could be after proving through examples how it could work across the entire state educational system,” he said. “We believe Peoria Public Schools could be that example showing how the arts work. And it should all be planned, written, documented and recorded by the students learning the skills and broadcast to show examples of how the arts can matter.” 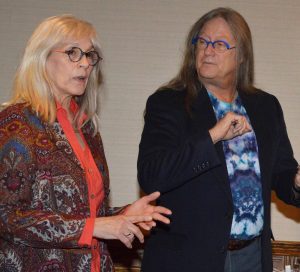 Local artists Doug and Eileen Leunig talk about their mission to make Peoria an international arts destination at a meeting last week hosted by the Greater Peoria League of Women Voters. The Leunigs offered a number of ways local citizens can help, such as buying art and attending art events. (Photo by Elise Zwicky /for Chronicle Media)

Another aspect of being a national arts destination is to have visible art accessible to the public, which Doug Leunig said Peoria offers through a growing number of murals, including a 50-foot “Abraham Blue” portrait hanging on the Peoria County Courthouse; the annual Sculpture Walk with work from local and national artists; last summer’s Shakespeare in the Park event; and free Peoria Symphony concerts on the riverfront.

“We have a greater ratio of people-to-arts-organizations than much bigger cities like Boston,” Doug Leunig said. “We want to put Peoria on the map for doing things in the arts. We want to get stories told about us.”

The biggest obstacle to making Peoria an international arts destination is a lack of understanding by the general public of how much the arts matter, Doug said.

“Overcoming that obstacle is going to be a slow process if left to entropy,” he noted.

The Leunigs provided a list of ways individuals can help, including:

They also suggested that businesses host an art event, make a donation or sign up to display public art.

“As citizens, talk to city commissioners to make sure they’re paying attention to the arts. Talk to the school board and tell them you want art to be required in schools,” Eileen Leunig added. “Write or email your state legislators. They need to hear that this is important to us.”

Gordon said, “It can be as simple as once a month invite a friend to do an art activity with you. There’s so much to do here, you will never run out of opportunities. The onus is on us because we do have this pretty awesome ratio of artists and arts organizations. The public needs to keep it going and engage with the arts community.”

Local filmmakers have a chance for grant

Local filmmakers interested in submitting a short film of any genre to this year’s Big Picture Film Festival now have a chance to win a $3,000 grant to help fund their work.

The local nonprofit organization Big Picture Initiative will award the grant to one central Illinois filmmaker to shoot a short movie this summer. Applicants must submit a proposal to bigpicturepeoriafilm@gmail.com by April 15.

Allison Walsh, a local filmmaker who directs the film festival, said the festival will accept national and international entries this year, so her committee wanted to offer a grant to a local filmmaker.

“Additionally, the film festival committee is all young filmmakers, and we really wanted to have this be part of the story of the filmmaking community here,” she added.

The grant is open to filmmakers ages 16 to 36 who reside in the Greater Peoria area for at least part of the year. Greater Peoria consists of Peoria, Tazewell, Woodford, Mason and Logan counties.

“We wanted to focus on emerging filmmakers,” Walsh said in explaining why they capped the age at 36.  “This is targeted to people who are emerging in their careers and maybe haven’t gotten a chance to find a grant that really suits them, so this could be that grant for them.”

The film must be up to 20 minutes long and production or post-production must happen in central Illinois. The grant recipient also must be willing to present his or her film at a special screening at the festival, along with a question-and-answer period, and must visit Peoria Public Schools one time to talk to kids about being a filmmaker.

The winner will be announced on May 10, and the film must be completed between May 5 and Aug. 15.

Novice filmmakers are encouraged to apply. “If you have worked on a video, podcast or another piece of work that shows your experience level and your artistic viewpoint, please include that instead of your past film,” the website www.bigpicturefilm.org states.

“Don’t be afraid to admit you are a first-time filmmaker in your proposal, but tell us a little about your crew and plan in your proposal to let us know how you will be successful.”

Walsh is a Peoria-based independent documentary filmmaker, freelance videographer and fine artist. She recently shared her short art film/documentary “Parallel Lines” at the Paris Art and Movie Awards in France and the Festival Sayulita in Mexico. The film follows a border patrol agent and former undocumented nanny living at the U.S.-Mexico boarder of El Paso and Juarez.

For more information about how to submit a grant proposal, visit www.bigpicturefilm.org or email questions to bigpicturefilm@gmail.com.