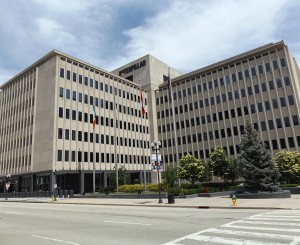 Caterpillar Inc. said Jan. 29 it will be shutting down some operations in East Peoria and lay off 120 employees there. (Chronicle photo)

On the heels of announcing a revenue shortfall, Caterpillar is cutting workers and shutting down an area facility.

The layoffs will be indefinite and begin Feb. 8, affecting office and shop workers. The company will relocate affected production to other Caterpillar facilities with a portion of the work moving to outside suppliers, the company said.

Caterpillar has eliminated about 2,300 workers in Illinois since Sept. 24, 2015, spokeswoman Rachel Potts told Crain’s Chicago Business. All told, Caterpillar has said the job cuts will save the company $1.5 billion.

Looking ahead, Caterpillar Chairman and CEO Doug Oberhelman told CNBC: “2016 is going to be rough and challenging again.”

Caterpillar does a lot of business in China, which has been building up infrastructure. In an interview with CNBC, Oberhelman said he sees long-term opportunity there but short-term pain. “Our numbers are down 30 percent-plus year over year [in China].”

“[There’s] a lot of oversupply from construction equipment,” he continued. “But they’re still pouring concrete and doing lots of things. Once that imbalance works out, it should be a pretty nice market.”

But China’s economy is showing signs of slowing — a trend that’s knocked financial markets for a loop in the new year on concerns about whether the U.S. recovery could also get derailed.

Caterpillar Inc., the world’s biggest maker of mining and construction machinery, said retail sales declined in all global regions last quarter as a demand slump in its energy-equipment business deepened, as reported by Bloomberg News.

Receipts in its energy and transportation segment fell 32 percent from a year earlier in the three months ended in December, the Peoria-based company said in a statement Jan. 27. That compares with a 29 percent decrease in the three months ended in November, marking the seventh straight month of accelerating declines. Sales of all machinery fell 16 percent last quarter, led by a 48 percent drop in mining equipment in the Asia-Pacific region.

“CAT continues to face global weakness across all of its end-markets, which we believe is driving capacity utilization down toward the low-40 percent range and will weigh heavily on 2016 profitability,” Joel Tiss, an analyst at BMO Capital Markets Corp., told Bloomberg.

Caterpillar’s earnings and revenue have tumbled as customers in the natural resources and energy sectors rein in capital spending amid a collapse in global commodities prices.

Profit is expected to fall 49 percent to 69 cents per share, according to the average of 20 analysts’ estimates compiled by Bloomberg.