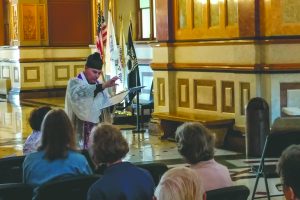 Father Edward Ohm of the Diocese of Peoria, speaks to fellow Catholic protesters who rallied in the Capitol Rotunda on Wednesday in Springfield against the expansion of abortion rights in Illinois. (Capitol News Illinois photo by Jerry Nowicki)

Led by Father Edward Ohm, of the Diocese of Peoria and based in Lincoln, a group of about 30 met to ensure their legislators know they are “not in favor” of laws recently enacted by the General Assembly and Democratic Gov. J.B. Pritzker, including the Reproductive Health Act and a package of tax increases.

The Reproductive Health Act created access to abortion, birth control, pregnancy benefits and exams, among other services, as a fundamental right, which means no level of government can infringe upon a man’s or woman’s access.

He added he is opposed to the abortion rights legislators’ next initiative, repealing a statute that mandates minors consult their parents before getting the procedure.

“Churches need people to help them when it comes to keeping the doors open on the weekends,” he said. “… The funds are not as plentiful as they used to be because more people are paying taxes and, on top of that, more people are moving out of state.”