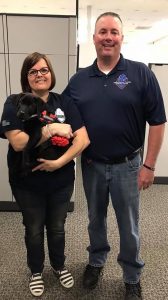 Disabled veteran Corey James and his wife Teresa pose with Zach, one of the labrador puppies being trained through the couple’s new nonprofit Freedom Paws Service Dogs Foundation. Funded only by donations, the group provides service dogs at no cost to veterans and first responders with post-traumatic stress disorder. (Photo courtesy of Freedom Paws Service Dogs)

Disabled veteran Corey James of Chillicothe was searching for a way to get a service dog for himself but ended up starting a foundation that provides service dogs for other disabled veterans and first responders with post-traumatic stress disorder.

“Being deployed multiple times myself, I know how hard it is to come back home and be disoriented while trying to fit back into everyday life,” said James, who spent 10 years on active duty with the U.S. Air Force and another six with the Air National Guard in Peoria.

James and his wife, Teresa, founded the nonprofit Chillicothe-based Freedom Paws Service Dogs in April. The foundation’s 501(c)(3) application with the Internal Revenue Service is pending.

“What we discovered when I was looking for a service dog myself is there’s really no place close in central Illinois…and most of them require you to jump through a lot of hoops just to get a dog. As a vet who suffers from PTSD myself, I know that just adds more stress and can affect the vet even worse,” James said.

He worked with the Zachary Lee Crawford Foundation in Chillicothe, another nonprofit dedicated to mentoring combat veterans and their families with PTSD, before deciding to start his own foundation.

“My wife used to be a puppy raiser and trainer for Leader Dogs for the Blind, and we’ve always fostered dogs. So this was kind of a natural thing for us,” James said.

The two have found breeders willing to donate puppies to the cause and volunteers willing to be puppy raisers. Annette Monge from Teacherzpetz, a training and boarding service in Metamora, volunteered to be the lead trainer.

“Ours is about a two-page application. Some of these other places have 30-page applications,” he noted. “We just have to verify that you do have PTSD. That can be a letter from your doctor or from the VA.”

While some programs don’t place a service dog until it reaches adulthood, Freedom Paws places dogs at about three months so they can start building a bond.

The veterans, puppy raisers and dogs all gather for weekly group training led by Monge at the VFW Post 4999 in Chillicothe, which donates use of the building.

“We have four dogs currently with (veterans) right now, and we have four puppy raiser families. My wife and I also have two puppies in our house,” James said. Two dogs are with trainers in Chicago, where they can get acclimated to city life for future placement with Chicago-area veterans or first responders.

While the dogs are all trained in various skills to assist their owners in mitigating life’s obstacles, each dog’s training is tailored to his owner’s individual needs. 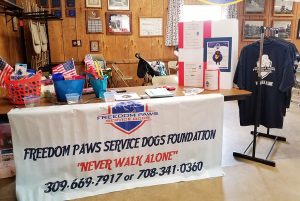 For disabled veteran Stephen Causey of Peoria, 6-month-old service dog Dakota has been a life-saver.

“I can’t tell you how dark of a hole I was in, honestly,” he said quietly. “I had searched for two years to get a service dog. There are four or five places across the country that had qualified service dogs that I felt were going to be able to meet my needs, but the paperwork is just extreme and the waiting lists are very long.”

Those groups also asked Causey to raise well over $10,000 or outright buy the dog. “With PTSD, you kind of end up pushing people away, so it’s kind of an impossible thing to fundraise and ask strangers to give you money,” he said.

“With (Freedom Paws), it was just a quick meet-up and the paperwork just involved a couple of forms I already had. And it didn’t cost anything,” he added.

Causey, who served five years in the U.S. Air Force Security Forces, said Dakota does much more for him than blocking and covering if people are in front or behind him and picking up his cane if he drops it.

“Part of my PTSD is hypervigilance, so having her there helps me be able to go outside without being afraid or on edge. It’s like having an extra set of ears, knowing she’s extra alert,” he said.

Jo Kitchens, a disabled veteran from Bloomington, had been scammed out of a large sum  of money by an organization that claimed to provide service dogs to veterans before another veteran told her about Freedom Paws.

After being matched with her service dog Zach, the 15-year U.S. Air Force veteran said of Freedom Paws: “They’re literally saving lives. Their motto is never walk alone, and they’re walking that every day.” 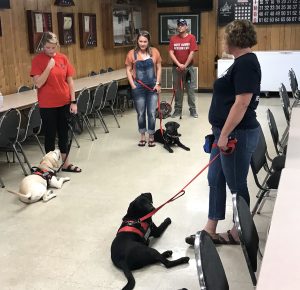 Zach goes everywhere with Kitchens, including work, and helps her manage her PTSD. “I get very stressed and anxious, and it’s hard for me to focus. And Zach will sit right at my feet and put his head on my leg, and he just kind of calms me and reminds me that it’s OK,” she said.

Eventually, Kitchens will need mobility support from Zach but for now he’s helping her with the emotional aspect of PTSD.

“With the group training, we’re all just kind of helping each other to accept ourselves. And I say our ‘new selves,’ because we’re not the same anymore,” Kitchens said.

For upcoming fundraisers, the group will be selling a calendar featuring photographs of dogs submitted by the public and planning a jeep and bike photo scavenger hunt across central Illinois next June.

Donations can be made at www.gofundme.com/f/freedom-paws-service-dogs, dropped off at Chillicothe Better Banks or mailed to Freedom Paws Service Dogs at 1222 N. Finney, Chillicothe IL 61523. Donations will be retroactively tax-deductible after the organization’s 501(c)(3) status is approved by the IRS.

For more information about how to help or how to apply for a service dog, visit the group’s website at www.freedompawsservicedogs.org or call 309- 669-7917.