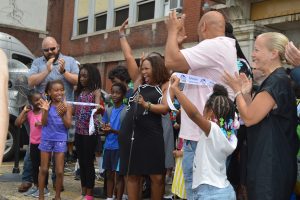 Nikki Romain (center) cheers at a recent ribbon cutting for the new Romain Arts and Culture Community Center, located in the old Greeley School at 919 NE Jefferson. Romain and her husband, Jonathon, are local artists who purchased the building last year from Peoria Public Schools and have used donations and grants to turn it into a nonprofit community arts center. (Photo by Elise Zwicky/for Chronicle Media)

Children’s voices are once again filling the halls of Peoria’s long-shuttered and now-transformed Greeley School.

Purchased from Peoria Public Schools by local artists Jonathon and Nikki Romain, the building at 919 NE Jefferson has been revamped into a nonprofit community arts center that began hosting its first month-long summer arts camp last week for kids ages 11-14.

At a recent ribbon cutting ceremony held on the building’s old playground, Jonathon Romain told the crowd it took a village to bring the project to life.

“A lot of you have seen us (in the news) and sometimes it can be very misleading because it looks like Nikki and I are standing on top of this hill, shining,” Romain said. “But when you get closer, you see we’re standing on the shoulders of hundreds and hundreds of people who believe so dearly in this mission.”

The Romains bought the building last year for $30,000 and set up a nonprofit organization called Artists ReEnvisioning Tomorrow (ART, Inc.).

Romain said donations of at least $2,500 each from about 50 people were the catalyst, but the project got a huge boost earlier this year when it received $460,000 from a state capital construction bill co-sponsored by state Rep. Jehan Gordon-Booth.

“She came in like a hurricane and said, ‘I believe in this mission,’ ” Romain said.

Peoria Public Schools Superintendent Sharon Desmoulin-Kherat praised the couple for their hard work and dedication. “The last time I saw that building it was dingy and terrible. When you walk through today you will see how they and their team have transformed this place,” she said.

Prior to the ribbon cutting, the Romains unveiled an art project created by PPS students from Trewyn, Glen Oak and Manual schools.

“One of the objectives was for them to start thinking critically about the community they live in and understanding that they’re not too young to get involved and be part of the solution,” Romain said.

With help from four instructors, the students created art pieces to represent three key issues in the community: violence, drop outs and drugs.

“Ten percent of this project was done by the four instructors helping them and 90 percent was done by the kids,” Romain said. “This illustrates the magic of what we’re trying to do at this center.”

Hinton pointed out faces in the “Stop the Violence” collage, noting, “These faces show what can happen if we stop the violence, and these show how violence shatters a community.”

Edwards, who hopes to become an actor, worked on the other two collages, which represented dropping out and saying no to drugs. “The problem is all these kids are killing each other other and dropping out of school. I learned you can never take life for granted,” he said.

Jonathon Romain knows personally how a project like the art center can help kids stay out of trouble. The Chicago native served seven years in prison after being arrested for selling drugs right before he was to graduate from Bradley University. He has since built a successful career as a nationally known artist.

Third-district councilman Tim Riggenbach told the crowd about a Jonathon Romain painting called “On the Fence” that has hung in his house for 10 years. “It’s an amazing picture of a young boy sitting on a fence with this contemplative look on his face,” he said.

Reading from a commentary on the painting penned by Romain, Riggenbach said, “On the Fence represents the hundreds of thousands of young people throughout the nation that are at a point in their lives where they can go in either direction. The likelihood of them succeeding or failing in life depends on who will reach them first. We can leave that responsibility to the children or we can assume ownership and get out into the trenches and really make a difference.”

Riggenbach challenged the crowd to be like the Romains and “get out in the trenches and make a difference for our kids.”

A tour of the building revealed renovated spaces that are hosting classes this month in coding, filmmaking, drama, dance and visual arts. Students who can’t afford the $300 tuition have scholarship opportunities made available through donations from individuals and corporations.

Nikki Romain said 21 of the 35 students in the inaugural camp received scholarships. “We are in need of more donations for our after-school program,” she said.

Bradley assistant women’s tennis coach Steve Tyler stood near some of his watercolor art  hanging on a wall in the filmmaking classroom. “I rent the wall space,” Tyler said. “I think this is wonderful for the community.”

“We purchased 11 computers and all the equipment they’ll need to get introduced to what filmmaking is all about,” Leunig said.

In the future, ART, Inc., plans to provide after-school programs, adult art classes, theater productions, private lessons and early childhood programs. A partnership with the University of Illinois Extension Master Gardener program led to the creation of the Lettuce Share Romain Community Garden that sits across the street from the new center.

“Our first harvest went to a local church and surrounding neighbors. We have people stopping almost every morning to get produce, all by word of mouth,” Nikki said.

Room rentals at the new center are also available to the community at $15 an hour for events such as meetings, birthday parties, book clubs, weddings and reunions. For more information, call (708) 465-6505 or visit the website at www.artincpeoria.org.