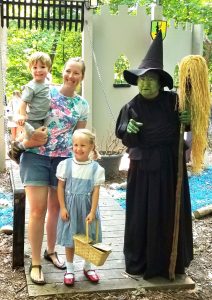 The Wicked Witch of the West from the Indiana-based Spirit of Oz costume troupe stands with visitors in front of the witch’s castle at a previous Oz Festival in Mapleton. This year’s festival takes place Aug. 10. (Photo courtesy of Hollis Park District)

The highway to Mapleton doesn’t quite look like the yellow brick road but it will take you to the land of Oz.

“It really tugs at your heart strings when you see all these little kids that are so excited and thrilled,” said Jim Robertson, director of parks and recreation for Mapleton’s Hollis Park District. “I don’t think some of them realize this is not really Kansas and they’re not really in Oz.”

The brainchild of park district master gardener Deb Ekvail, the Oz garden was originally conceived for children, but the festival appeals to all ages and even draws people from out of state.

The garden’s yellow brick road starts in Munchkinland and travels through the Scarecrow’s field, the Tin Man’s cabin and the Cowardly Lion’s lair and ends at Emerald City. It also features Auntie Em’s farm, Professor Marvel’s area, the Haunted Forest trail and the Wicked Witch’s castle.

A smaller version of the garden created and designed by Ekvail with help from Frank Sanders and other volunteers originally existed in the park’s northwest corner when Robertson took over as parks director in 2010 and proposed hosting an Oz Festival.

“We had 300 to 500 people come for the first three years,” Robertson recalled. “It was a nice little festival and everybody was happy.”

In 2015, however, the tiny village of about 230 residents experienced firsthand the power of social media when a Facebook post about the festival generated more than a million views within a few days.

“We ended up having 5,000 people turn out that year, and we were overwhelmed,” Robertson said. “We had a little bitty concession stand, no entertainment, just some local people dressed in character. You just kind of walked down the yellow brick road and enjoyed a day in the park and that was it.” 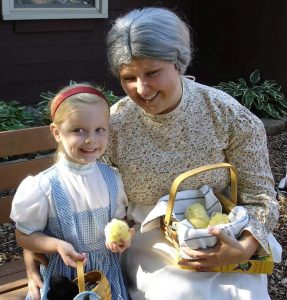 Auntie Em sits with a young Dorothy at a previous Oz Festival in Mapleton. The festival, which takes place Aug. 10 this year, includes a hayrack ride through the Oz Park narrated by Auntie Em. (Photo courtesy of Hollis Park District)

After surviving that onslaught of Oz fans, the park district kicked it into gear and moved and enhanced the Oz garden to the park’s northeast corner.

“We put in a $16,000 yellow brick road and just really expanded the whole area,” Robertson said. “The first thing we did was take a sod cutter and cut out a very large tornado. Then we built our Kansas inside the tornado.”

Everything in the Kansas area is painted in monotone colors to simulate the coloring in “The Wizard of Oz” movie. Visitors walk through a small cornfield on the backside of Kansas to get to Munchkinland, where there’s an explosion of color, similar to what Dorothy experienced in the 1939 classic movie.

The yellow brick road winds through the woods into the haunted forest and back out again. The forest features music and the sound of the Wicked Witch’s infamous flying monkeys.

“It’s not a constant monkey chatter, but I’ve seen people run out the woods because it’s stone-cold silent and then all of a sudden you have this loud screeching monkey sound,” Robertson said with a chuckle.

The festival currently averages about 1,000 visitors each year, but Robertson would like to expand that number to 2,500. “We feel like we can handle that,” he said.

The festival will feature about 50 vendors, including six or so that sell Oz collectibles, such as autographs, jewelry, pictures and wine charms.

“To the right after you walk in, we’ll have a hayrack ride that runs about every 20 minutes. Auntie Em is on the hayrack, and she tells stories,” Robertson said.

Throughout the festival, characters from the Indiana-based Spirit of Oz costume troupe will be interacting with the crowd and posing for pictures.

“This is a very professional troupe that MGM hired five years ago to celebrate the 75th anniversary of the movie in California,” Robertson said. “They have kind of adopted us.” 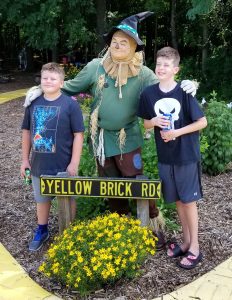 Scarecrow from the Spirit of Oz costume troupe poses with visitors next to the yellow brick road at a previous Oz Festival in Mapleton. Located in Butler Haynes Park, the Oz garden is a nod to the “Wizard of Oz” set and will be the site of park’s annual Oz Festival on Aug. 10. (Photo courtesy of Hollis Park District)

The characters put on an opening ceremony at the beginning of the festival and perform some type of activity around noon and at the end of the day. “I never know what they’re going to do until about a half hour beforehand,” Robertson said.

“The first year, I made some big announcement as a misdirection just as the Tin Man, Dorothy and the Scarecrow came in. Then we had a loud firecracker sound in the back, and the Wicked Witch came running in, screaming and cackling, running through the crowd yelling for Dorothy and her ruby slippers.”

Another year, Dorothy left in a hot air balloon. “Every year we try to do something different,” he said.

Festival-goers are encouraged to dress in costume  and will be invited to join a character parade if they do.

Other entertainment will include multiple shows by Stevens Puppet’s with hand-carved  Wizard of Oz marionettes, Professor Marvel’s magic show, a petting zoo and a Wizard of Oz trivia contest. A bounce house, slides, dunk tank and concession stand will also be available.

“We have a $20,000 budget and we have yet to make money on this, but we’re getting closer,” Robertson said. “It just tickles us to be able to provide this for people. For 5 bucks, it’s a day’s worth of entertainment.”

Aside from festival day, the Oz garden is open to the public year-round from 8 a.m. to dusk at no charge, but Robertson noted, “During the Oz Festival, we put out a lot of extra props that we can’t leave out during the rest of the year, so it’s a little more spectacular during the festival.”

For more information, visit the 2019 Oz Festival Illinois Facebook page or the park district’s website at www.hollispark.org or call 309-697-2944, ext. 1.