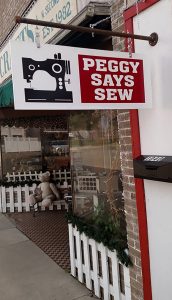 Peggy Yung opened Peggy Says Sew in downtown Chillicothe in 2014. She credited her husband, Ray, with coming up with the clever name. (Photo courtesy of Peggy Yung)

If a wedding dress in the Tri-County area has needed alterations in the past five years, chances are good that Peggy Yung worked her magic on it.

“I’ve probably done at least 200 wedding gowns over the years,” said the Washington native who opened Peggy Says Sew at 1040 N. Second St. in Chillicothe in 2014.

Yung has been passionate about sewing since she was a young girl but never expected to make it her career until a casual remark by her husband sparked an idea.

“I had people coming to our house for wedding dresses and alterations on the side, and one day my husband just asked me if I wanted to get my own shop,” Yung recalled. “I did have a full-time job at Country Financial at the time, and I loved that job. But I love this job more.”

Yung’s husband, Ray, also gets credit for coming up with the shop’s clever name.

Yung is a full-service seamstress with more than 40 years of sewing experience who prides herself in not specializing in one certain thing. She learned how to sew from her mom at about age 4 and was making her own clothes in high school.

“People can come to me for their wedding dress alterations and then a couple of months later, come back for a coat zipper. I do it all,” she said.

Over the years, Yung has done major and minor alterations for men, women and children, including hemming jeans and other pants, adjusting sleeves, adding a bustle to wedding dresses and repairing or replacing zippers on clothing, backpacks and even tents.

“You name it, and I’ve probably done it,” she said. “Sometimes you just don’t know if it’s going to work or not. But it’s pretty amazing when people come in and say, ‘I can’t believe you did that.’ That’s a good feeling.” 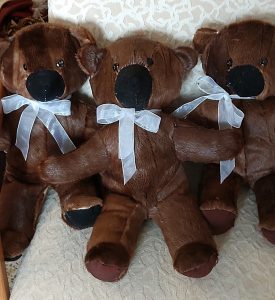 Peggy Yung, owner of Peggy Says Sew, made these bears from an old otter fur coat that had been passed down by a client’s grandmother. Yung also makes memory pillows and bears from a deceased loved one’s shirt or other article of clothing. (Photo courtesy of Peggy Yung)

Memory bears and memory pillows made from a deceased loved one’s shirt or other article of clothing are among Yung’s most requested services. “The word has gotten out that I make those, so I’ve actually sent some to people in Florida, Chicago and Tennessee,” she said.

Yung started sewing the memory projects after a customer asked her to make a bear from a baby onesie. “I found a vintage pattern I liked, and it turned out good, so I put it out there that I make those,” Yung said. “I have 10 sitting in the shop right now that are all cut out and just need to be sewn up.”

Recently, a customer brought in an otter fur coat that had belonged to her grandmother. “Nobody wanted to wear it, so she asked if I could make bears out of it. I’d never done it before, but I gave it a try and they turned out really cute,” Yung said.

“I think the memory pillows and bears are popular because then the (clothing item) isn’t just hanging in a closet where no one sees it. They can put a pillow or a bear on the couch or on their bed, they can hold it and they can remember the person that it belonged to,” she added.

Formal alterations might keep Yung the busiest. “In the summer, it’s bridal alterations, and then during the school year I do a lot of formal dress alterations for prom and homecoming and things like that,” she said.

Thinking back to all the various wedding dresses she’s altered over the years, Yung remembers the smiles on the brides’ faces at their final fitting.

“Sometimes with wedding dresses, people ask for seemingly impossible stuff, so I have to let it sit on the mannequin for a couple of days until I figure it out,” she said with a laugh. “I really enjoy the challenge.”

One client brought in her mom’s wedding dress from 1984 and wanted Yung to update it so she could wear it at her wedding. 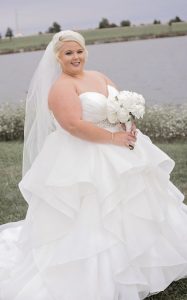 Katie Lacey of Morton turned to Peggy Says Sew in Chillicothe to make alterations to her wedding gown last year and was thrilled with the results. “I would recommend her to anyone,” Lacey said. (Photo courtesy of Katie Lacey)

“Back then wedding dresses had the big lace collar and the big lace sleeves. I took all the lace off the neck and made it strapless with a sweetheart neckline and put a corset in the back, and it turned out beautiful. So, she wore her mom’s wedding dress repurposed. She cried when she tried it on. That was one I loved doing,” Yung said.

Katie Lacey of Morton was referred to Yung by a Bartonville dress shop when her wedding dress needed alterations last year. Yung took in the top of the dress and hemmed three different layers, among other alterations.

“The ruffles were very detailed, and I couldn’t tell that they were removed and put back on after she was through,” Lacey said. “She finished with a bustle on each side and one on the back. Each bustle was complete with a diamond jewel for the complete Cinderella touch. She also did alterations for all three of my bridesmaids, one of whom was pregnant and had to have material added to the back of the garment. Peggy did a phenomenal job at listening to our wants and concerns and really delivering with what we wanted. I would recommend her to anyone.”

Peggy Says Sew is open 10 a.m. to 5 p.m. Tuesday through Friday and also by appointment. “I always try to be available,” Yung said. “I also take ‘last-minute’ items for people needing special occasion items in a couple of days.”