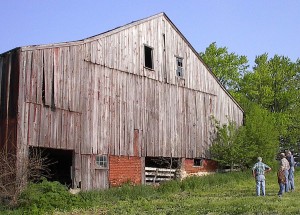 The nonprofit group Barnstorming is spearheading a project to deconstruct and rebuild this historic barn, which was built by Caleb Davidson in 1838 in what is now rural Eureka. If enough money is raised, the restored barn will become a community center in Lake Eureka Park. (Photo courtesy of Steve Colburn/Barnstorming)

Work has begun on the first phase of a project that could result in a new community center built from a deconstructed historic barn once visited by Abraham Lincoln.

Following an agreement reached last month between the city of Eureka and the nonprofit Barnstorming group spearheading the project, the Davidson barn is currently being measured and reviewed by a team of experts from Trillium Dell Timberworks.

This work by the Knoxville-based timber frame and restoration company is expected to take several months and will result in a detailed plan and cost estimate to restore the 176-year-old barn and rebuild it as a public community/cultural center on the shore of Lake Eureka, according to Barnstorming president Steve Colburn.

“A lot of people are confident this will happen. We just keep moving along,” said Colburn, a great-great-great grandson of Caleb Davidson, who built the barn in 1838 on his property in rural Walnut Grove—which later became Eureka.

The agreement with the city gives Barnstorming 6 ½ years to complete the project, including four years to raise funding and two and a half years for construction.

Located northwest of Eureka on the edge of Walnut Creek, the barn is one of the oldest structures still standing in Woodford County.

“There’s a general slow deterioration that happens with any structure,” Colburn said. “We’ve kept it covered with tarps. The past owner and the current owner have no interest in fixing it up for themselves, so if no one else does, it’s just going to continue to deteriorate. A lot of people have the sentiment that the barn should be restored because it is an integral part of our very early settlement era history.” 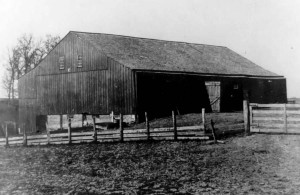 This photo of the 176-year-old Davidson barn was likely taken more than 100 years ago, according to Steve Colburn, president of the nonprofit Barnstorming group that is leading an effort to restore the barn as a community center. (Photo courtesy of Steve Colburn/Barnstorming)

Colburn said some of the beams in the 56-foot-by-86.5-foot barn are perfectly sound, while others could be repaired at the Trillium Dell Timberworks shop.

Trillium Dell is being paid $9,800 for the comprehensive review from a fund of about $25,000 that has been donated to Barnstorming for the project before the group has even launched an organized fundraising campaign, Colburn said.

Trillium Dell has reconstructed and repaired more timber frame barns than any other company in the Midwest, according to its website at www.trilliumdell.com. While the company has done restoration work around the country, most of its projects have been in Illinois, including structures in Aledo, Dekalb and Metropolis.

The Davidson barn has a connection to Abraham Lincoln, who was a Springfield lawyer in 1854 when hired by Caleb Davidson to represent him in a cattle theft case. With Lincoln’s help, Davidson won the case and received $17 in damages. Lincoln visited the Davidson farm frequently while preparing for the case and most likely kept his horse in the barn, Colburn said.

“It’s one of the few Lincoln sites that we’ll hopefully be able to preserve,” he added. “Even though it will be moved, it still has that tie that Lincoln was there. He came back to the farm many times after serving as the attorney in that case.”

: A computer-generated model shows what a new Eureka community center on the shore of Lake Eureka might look like after it is built from a deconstructed 176-year-old barn that was visited many times by Abraham Lincoln when he practiced law in Springfield. (Photo courtesy of Steve Colburn/Barnstorming)

Barnstorming was founded in 2008, about three years after Colburn and a few others began talking about somehow preserving the Davidson barn. The group is governed by a seven-member board of directors and lists the Central Illinois Landmarks Foundation as a supporting organization.

“We didn’t expect (the project) to take this long,” acknowledged Colburn, noting that the board had another location in mind early on that didn’t work out. If the project comes to fruition, the Davidson Barn Community Center will be located in Lake Eureka Park between the volleyball court and the bandstand, about two miles south of its current location.

Mayor Scott Punke sees many benefits for the creation of a community center, envisioning it as a place for fellowship, community dances and events, business retreats, seminars and private gatherings such as weddings, reunions and birthday parties.

“The possibilities are endless,” Punke said. “I truly believe that if this project happens, it will become a beautiful addition to our city, an amenity that will provide a much-needed place to hold community activities and events for all the residents of this great community to enjoy, young and old.”

Under terms of the agreement with the city, Barnstorming must complete 90 percent of the necessary fundraising before construction begins, and the city has final say on all building plans and designs. Upon completion, the barn would be gifted to the city of Eureka, who would then take over ownership.

Colburn said the study by Trillium Dell will give a more specific idea of how much the project will cost, but he expects it to be between $1 million and $2 million.

“We want to have a clear design and cost estimate before we start a formal public appeal,” Colburn said. “I have people asking me about the project often, so I hope there’s a good public response.”

Barnstorming, which has also been working with Bloomington architect Paul Young, hopes to receive Trillium Dell’s report by mid-summer and kick off a fundraising campaign later this year.

Barnstorming will present information about the Davidson barn restoration project at the Central Illinois Landmarks Foundation’s program “Presenting Preservation” at 2 p.m. May 15 at the GAR Hall in Peoria.

In the meantime, anyone who wants to help generate ideas or donate to the project can call Steve Colburn at (309) 467-3144 or email him at scolburn@mtco.com. More information, including a video interview with a woman who grew up on the farm, can be found on the Barnstorming website at www.barnstorming.org.

“Here’s an opportunity for a very attractive community center that relates to the very early history of our community,” Colburn said. “Once it’s completed, it will be unique with its own charm and will have a regional draw.”

— Historic Eureka barn could get new life as community center —