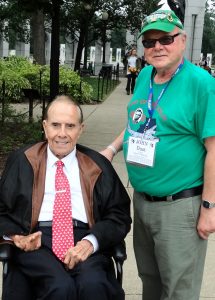 Land of Lincoln Honor Flight volunteer John Dust stands next to World War II veteran and former Senate Majority Leader Bob Dole at the World War II memorial in Washington, D.C. in May 2017. Dust has been a guardian or bus captain on 33 Honor Flights during the past seven years. (Photo courtesy of John Dust)

After helping veterans on 33 Honor Flights during the past seven years, John Dust remembers every trip as unique and humbling.

“It was a life-changing experience,” Dust said of the flights he took either as a guardian or bus captain for the Land of Lincoln Honor Flight group.

A U.S. Army veteran of the Vietnam era, Dust stepped down as a volunteer for LLHF last month to make time for other interests. Honor Flight is a national non-profit organization dedicated to honoring America’s veterans by transporting them to Washington, D.C., to visit and reflect at the veterans memorials.

“It has been one of the most wonderful and humbling experiences of my life, but life is short and I have many more items still on my bucket list, including now volunteering with a couple of organizations closer to my Washington, Ill., home,” Dust said in announcing his retirement from the volunteer position, which also included handling media inquiries and helping to raise funds and organize Honor Flight trips.

Dust first learned about the program in 2010 when two veterans spoke about it at his Roanoke-Benson American Legion Post.

“None of us even knew what Honor Flight was at that time,” said the Roanoke native, adding that Honor Flight began nationally in 2005 and started in Springfield in 2009. A Peoria chapter was formed in 2013. Other chapters in Illinois are located in Chicago, Fox River Grove, Lake County, the Quad Cities, Quincy and Marion.

After listening to the two veterans’ emotional account of their trip, “I instantly said I have to go home and find out what this organization is that makes hardened World War II veterans cry,” Dust said. He volunteered to be a guardian on an Honor Flight trip in April 2011 and was immediately hooked. 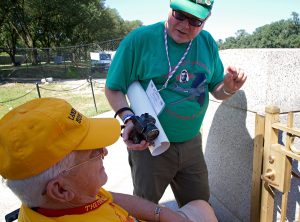 Honor Flight volunteer John Dust talks with a Korean veteran at the World War II memorial in Washington, D.C. Dust is stepping away from his volunteer duties with the Land of Lincoln Honor Flight program after seven years but encourages others to step up to help. (Photo courtesy of John Dust)

“About 75 to 80 percent of the veterans come with their own guardian—a son or daughter or grown grandchildren–but the others just don’t have someone who can go with them, so on every flight you need independent or freelance guardians,” Dust said. While the veterans fly free, guardians pay their own way.

Dust has gone on 13 flights as a guardian and 20 as a bus captain, helping transport veterans to the various memorials. He was elected to the LLHF board in October 2012.

One reason Dust joined the American Legion and the Honor Flight program was that he felt lucky to have been sent by the Army to Germany in 1966 rather than Vietnam after being drafted. Another reason was because his father was a World War II veteran who died before that memorial was built, and his only maternal uncle was killed in Korea. “I thought if I can’t take them as a guardian, I can help take other veterans,” Dust said.

“I truly have learned history from the mouths of people that were there. You can read all the books you want about Normandy or Iwo Jima or bombers or whatever, but it’s not the same as hearing about it from the guy who landed on Normandy or stormed Iwo Jima or flew a bomber,” Dust added. “I have been so fortunate to hear the stories. Some were funny and others will haunt me for the rest of my life.” 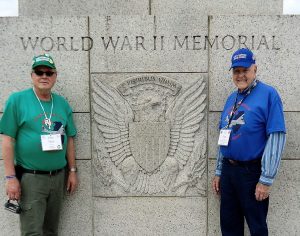 Land of Lincoln Honor Flight volunteer John Dust (left) poses with World War II veteran Ed Freas of Pekin during the second of 33 Honor Flights Dust volunteered on. Dust, who is also a veteran, is stepping down from his volunteer duties with Honor Flight after seven years to make time for other interests. (Photo courtesy of John Dust)

He spoke in awe of a stoic veteran in his mid-80s who talked quietly about losing his best friend to Japanese fighter aircraft the first day they landed in Burma. The veteran went on to explain how they built trenches a few days later to jump into when the aircraft fighters came back.

“Here was a guy who was terrified of snakes. He jumped into a trench and there was a 12-foot snake in there. He said he came out of there and all his buddies were yelling to get back in, but at that moment he made the decision to stand up to the airplanes versus that snake,” Dust said. “So he’s standing outside the foxhole shooting at these airplanes. He said, ‘I got a reputation for being the bravest guy, and I never corrected them that I was actually the most chicken because I was not going to be in a trench with a snake,’ Those are the type of one-on-one stories you don’t hear in books. So every adventure was different, and it never got old.”

With his 71st birthday looming, Dust said he wants to spend more time volunteering for other organizations, such as Bradley University’s OLLI lifelong learning program, and to pursue his passion of traveling with his wife of 48 years, Shirley.

“Photography and videography is a main hobby, which ties in well with my passion to travel and learn,” Dust said. “We just came back from Egypt and Jordan in September.”

Joan Bortolon, president of the Land of Lincoln Honor Flight, said Dust will be missed within the organization. 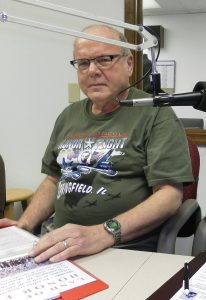 Veteran John Dust of Washington does a radio interview in Peoria promoting the Honor Flight program. Dust volunteered with the Land of Lincoln Honor Flight group for seven years, calling the experience “life-changing and humbling.” (Photo courtesy of John Dust)

“John Dust is the type of volunteer that any organization would desire,” she said. “He offered talent, creativity and enthusiasm as he fulfilled his duties as marketing/media and veteran coordinator. He was tireless in representing Land of Lincoln Honor Flight at various events throughout our large territory and served as a top-notch ambassador for the Honor Flight program. We will miss his work ethic, good humor and devotion to the cause.”

Dust is hoping others will step up to volunteer with the program. “It’s not a vacation. Guardians have duties. But I can’t tell you how many guardians to this day say it’s still one of the most memorable days they’ve ever had in their lives. And if you can’t go as a guardian, just go to a welcome home (at the airport) and see what it means. It’s not often you can go somewhere and greet 70 to 80 heroes all in one place,” he said.

For more information about the Honor Flight program and how to volunteer or donate, visit www.honorflight.org.