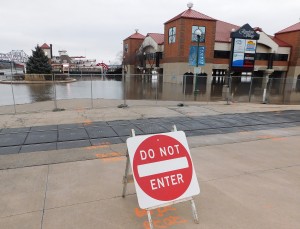 No damage has been reported from flooding along Peoria’s riverfront, but sandbags will remain and parking restrictions will continue until the water recedes and city workers are able to clean up the area.

“We did a limited sandbag operation around the River Station. I was down there Saturday afternoon (Jan. 2) at the river’s crest, and the wall had held,” said Assistant City Manager Chris Setti.

The river crested Sunday at 26.4 feet, according to the National Weather Service. Flood stage is 18 feet.

“The wall did what it was intended to do, so there’s been no damage,” Setti said. “Once the water recedes, there will be a clean-up operation because it leaves behind a good deal of mud and muck in its wake.”

Setti was not able to estimate how many sandbags were used because the city has a new sandbagging system called RIBS (Rapid Installation Barrier System).

“We purchased the RIBS system in the last flood, and they are gigantic sandbags. There’s a system for filling them with an end loader, so I couldn’t tell you offhand how many sandbags we put out there or what the equivalent was,” Setti said.

“Our public works crew did a tremendous job,” he added. “We mobilized quickly and executed a plan in a short amount of time. We were supposed to start Wednesday morning (Dec. 30), but then it snowed, so all those guys had to go out and push a little snow around and do some salting. They started the sandbag operation about 2 p.m. and were done by 10 p.m.”

“We allowed all those areas to flood, so you certainly wouldn’t want to park a car there,” Setti said. “Those areas will be closed until the water recedes and we’re able to clean up down there.”

He said it likely will take a week or so for the water to recede below the wall, and clean up will depend on the weather. 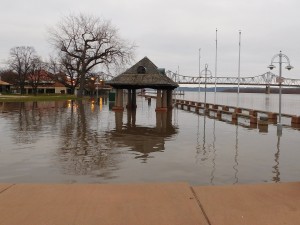 The river crested Sunday at 26.4 feet, according to the National Weather Service. Flood stage is 18 feet. (Chronicle Media photo)

“The same guys that do that kind of clean up also plow the snow, remove trees and do all the other stuff. So the clean up will be a priority but it may not be the number one priority. But we’ll get to it as soon as we can,” Setti said.

In the meantime, all riverfront businesses are open for normal businesses hours.

“In the River Station building, Martini’s and the Blue Duck Tavern have their front doors open. And the businesses on top of the platform—New Amsterdam, Joe’s Crab Shack and the Chamber of Commerce EDC offices—are all accessible via a staircase along water street,” Setti said.

While this kind of flooding is unusual for this time of year, Setti said it’s not unprecedented.

“Even the June flooding was somewhat rare. We usually think about flooding in April or May. But we’re getting good at it. Every time, we learn a little more about where the low spots are, where the high spots are and how the water acts, and it makes us better at it for the next time.”