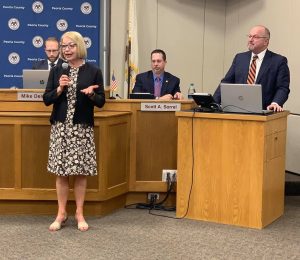 The Illinois Department of Public Health (IDPH) has received reports of six young people experiencing severe breathing problems after vaping, and is investigating five more individuals.  These individuals experienced respiratory symptoms including cough, shortness of breath, and fatigue. Some also experienced vomiting and diarrhea.  Symptoms worsened over a period of days or weeks before admission to the hospital.
“IDPH is working with local health departments and hospitals to investigate reported cases of hospitalized individuals with unexplained respiratory illness and a history of vaping,” said IDPH Director Dr. Ngozi Ezike.  “The short- and long-term effects of vaping are still being researched, but these recent hospitalizations have shown that there is the potential for immediate health consequences.”
IDPH is also working with local health departments, other states, the Centers for Disease Control and Prevention, and the Food and Drug Administration to investigate the names and types of vaping products, as well as where they were obtained.  Without this information, we have been unable to conclusively determine which chemicals the individuals may have been exposed to.
People who experience any type of chest pain or difficulty breathing after vaping in the weeks or months prior to these symptoms should seek immediate medical attention.  Health care providers caring for patients with unexpected serious respiratory illness should ask about a history of vaping.
More information about e-cigarettes, vapes, and JUULs can be found on the IDPH website at http://www.dph.illinois.gov/topics-services/prevention-wellness/tobacco/e-cigarettes-and-vapes.

The Illinois Department of Transportation is expanding its Life or Death Illinois campaign to include Scott’s Law, calling attention to the need to protect first responders, emergency personnel and frontline highway workers.

A new video that will air statewide comes after Gov. J.B. Pritzker recently signed legislation strengthening the law while bringing together stakeholders to find solutions to prevent future tragedies on Illinois roads.

The video features footage of Kyle Deatherage, an Illinois State Police trooper struck and killed while making a traffic stop near Litchfield in 2012.

Deatherage was survived by his wife and two young children. The video will air on TV, various online platforms and social media.

Scott’s Law requires drivers to slow down and move over, if possible, when approaching any vehicle with flashing lights. It was named after Chicago firefighter Scott Gillen, who was struck and killed while assisting at a crash scene. In the past year, three state troopers have been killed while performing traffic stops.

“The Illinois State Police is grateful to IDOT for including Scott’s Law in the Life or Death Illinois campaign,” stated Acting ISP Director Brendan Kelly. “This campaign will honor the life of Trooper Deatherage and his family as well as the lives of countless other troopers, first responders and frontline highway workers by bringing a greater awareness to the sad consequences of violating Scott’s Law.”

Life or Death Illinois is the first comprehensive approach by IDOT to reduce injuries and fatalities associated with motorcycles, bicycles, pedestrians, seatbelt use, work zones, and impaired and distracted driving.

The campaign, which this year features stories of Illinois residents who died in traffic crashes, is made possible through federal funds administered by IDOT.

For more information on the campaign and to view the video, visit www.lifeordeathillinois.com.

Applications being accepted for Citizens Academy

Get an in-depth look at your local government – join us for our annual Citizens Leadership Academy this fall. Participants tour facilities and interact with www.facebook.com/peoriail and Peoria County staff members during Tuesday and Thursday night sessions from Sept. 10-Oct.10.

Applications are due Friday, Aug. 23. The program is limited to 25 participants. More information and applications are available at https://bit.ly/2GNB5vO.

The North Branch of the Peoria Library, 3001 W. Grand Parkway,  welcomes singer/songwriter Shawna Caspi from 2 to 4 p.m. on Sunday, Aug. 25.

Caspi performs solo, but there is a whole band under her fingertips. A mighty singer, a story sculptor, and a truth teller, she has toured across Canada and the U.S.

Caspi believes in poetry and the power of one person and one instrument, accompanying herself with a remarkable lyrical fingerpicking guitar style. A portion of CD sales support The Friends of Peoria Public Library.

Formerly known as Erin Feis, Peoria Irish Fest has been in Peoria since 1981.This year’s festival runs from Friday, Aug. 23 through Sunday, Aug. 25 along NW Water Street.

The weekend festivities kick off with the Happy Hour 5K race at 6 p.m. on Friday. After the race enjoy the best of the fest’s food, beverages and musicians from around the world.

Each participant in the race receives:

Visit the website at https://peoriairishfest.com to  to stay up-to-date on who will be there, snag ticket specials, and improvements coming this year.

History on the Move in this Peoria Historical Society event.

The tour begins with a brief look at the oldest part of Grandview Drive and learn about its construction and history.  The tour moves to historic Springdale Cemetery, the oldest chartered cemetery in the state.  Enjoy the beautiful park-like setting as you hear stories of those who have their final resting place there.

For more information, go to www.facebook.com/pg/PeoriaHistoricalSociety.