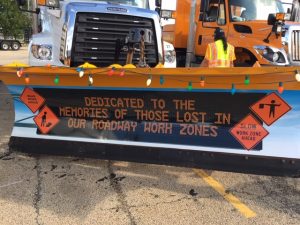 The Illinois Department of Transportation held its 28th Annual Snow Roadeo in Peoria on Sept. 13. (Photo courtesy of IDOT)

The 28th Annual Snow Roadeo was held in Peoria on Sept. 13. The Illinois Department of Transportation once again partnered with the state chapter of the American Public Works Association to host the friendly competition that sharpens the skills of plow drivers throughout the state and calls attention to the need for people to apply for jobs keeping roads clear of snow and ice.

At the roadeo, participants put their skills to the test behind the wheel of a highway maintenance truck while driving through an obstacle course. Points were awarded based on speed, skill and accuracy. Drivers also showed off their safety skills and proved their mechanical knowledge via a diagnostic vehicle inspection.

Contestants took home a variety of prizes, including the coveted traveling trophy, which was awarded to the City of Peoria.

Local public works employees in Illinois maintain more than 145,000 miles of rural and municipal roads, enough to circle the earth almost six times. At IDOT, crews deploy nearly 1,800 trucks during winter, clearing more than 45,000 miles of lanes in a year — or the equivalent of driving from Chicago to the tip of South America almost seven times.

IDOT is currently hiring seasonal help for snow-and-ice removal throughout the state. Applicants will be selected based on availability, experience and qualifications. Veterans are encouraged to apply.

Peoria residents are invited to enroll in the Citizen Police Academy which will be held at the Peoria Police Department from 6pm to 9pm every Wednesday beginning Oct. 9 through Nov. 20, seven sessions.

The purpose of the academy is to give residents a better understanding of the operations of the Peoria Police Department and to provide a forum for police officers and residents to interact in an informal setting.

Applicants must be at least 18 years of age and successfully pass a background check. Applications will be accepted until 30 people have registered or Oct.  4, whichever comes first. Citizen Police Academy applications are available at the Peoria Police Department web site at http://www.peoriagov.org/peoria-police-department/neighborhood-programs/.

An application can also be requested by contacting Officer Amy Dotson at 309-620-2047.

The 2019 Illinois 4-H Hall of Fame class includes 80 new inductees who were honored during a celebration Tuesday, Aug. 13 at the Illinois State Fair in Springfield. Those inducted from the Fulton-Mason-Peoria-Tazewell Unit include Lee Roy Knuppel of Canton, Mason 4-H Alumni Bill Bree of Lincoln, Tazewell 4-H leader Joe Grove of Mapleton (not pictured), and the late Jason Coulter from Elmwood represented by his wife Wendy and sons.

The Illinois 4-H Foundation annually recognizes 4-H volunteers for exemplary service.  The 2019 Hall of Fame class includes 80 new inductees who were honored during a celebration

Aug. 13 at the Illinois State Fair in Springfield.

Those inducted from the Fulton-Mason-Peoria-Tazewell Unit include Lee Roy Knuppel of Canton, Mason 4-H Alumni Bill Bree of Lincoln, Tazewell 4-H leader Joe Grove of Mapleton, and the late Jason Coulter from Elmwood.

Knuppel has been a 4-H volunteer in the 4-H Shooting Sports Program for 10 years, teaching and mentoring youth in Fulton and Tazewell counties. More than 60 young people have learned safety and respect for firearms through Knuppel’s teaching. He has volunteered for 4-H in other ways over the years, too, including helping with a 4-H club his late sister, JoAnn Block, led for many years.

Bree continues to give back to the 4-H by serving as a livestock judge at 4-H shows across the state and at the Illinois State Fair. He has judged poultry, goats, cattle and sheep.  He also judges the Mason County beef scramble show each year, in memory of his brother.  Bree is well respected for his expertise and knowledge of many livestock species.  He has been the teacher at numerous 4-H workshops in Mason, Logan, and Dewitt Counties.

Grove’s dedication to the Tazewell County Archery SPIN Club is undeniable! He began assisting the Archery Club when his son joined and soon went through the state training to be a certified instructor.

Nearly 10 years later, he has put in countless hours between instructing and organizing the program. Grove’s quiet leadership style is what makes him a fantastic leader and mentor to the youth.

Coulter was a good role model for youth and a dedicated supporter of the 4-H program. He had a warm and friendly personality and the ability to make the work like cleaning the barn stalls after the 4-H Show seem like fun.

The Illinois 4-H Foundation established the statewide Hall of Fame in 2004 to honor and celebrate extraordinary 4-H alumni, volunteers, and former 4-H staff. Each inductee receives a commemorative Hall of Fame medallion.

Serve Illinois administers the AmeriCorps state programs in Illinois and is charged with enhancing and supporting community volunteerism.  Serve Illinois is funded, in part, by the federal Corporation for National and Community Service and currently supports 46 AmeriCorps programs throughout the state.

AmeriCorps members receive student loan deferment and training.  Full-time members are also eligible to receive a modest living allowance and health insurance.  Members who successfully complete their service receive an educational award to help pay for college, graduate school, vocational training, or to pay off student loans.  If the member is 55 or over, they may transfer the education award to a child, grandchild, or foster child.

Serve Illinois will host mandatory webinars in September and October for those interested in applying.  Webinar details and information about the application process are available at www.Serve.Illinois.gov.  Applications are due by November 17, 2019.  Funded programs will begin their work in July or August 2020.