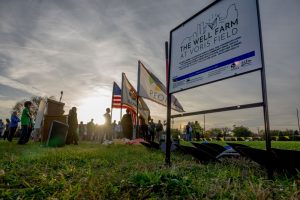 The Well Farm at Voris Field is a new urban farm in Peoria’s First District. The public is invited to celebrate the opening of the farm with a ribbon-cutting ceremony and community barbeque at 1 p.m. June 30.

June is World Elder Abuse Awareness Month in Illinois, and the state’s Department on Aging (IDoA) is encouraging “Building Strong Support for Elders.” That’s the theme of this year’s recognition, which emphasizes the importance of strengthening communities and preventing elder abuse.

Jean Bohnhoff, director of IDoA, calls elder abuse “a silent epidemic,” and one that has to end.

In 2017, Adult Protective Services at IDoA responded to more than 16,000 reports of suspected abuse, neglect and financial exploitation of adults with disabilities and adults 60 years of age and older. Financial exploitation represents 54 percent of elder abuse cases, and victims generally experience more than one type of abuse, i.e., financial abuse is highly associated with emotional abuse at 43 percent.

The newly renovated Illinois Governor’s Mansion has a new curator. He is Justin A. Blandford, who will be responsible for creating and implementing the mansion’s new strategic vision, which includes a greater focus on history, education, creative arts and visitor experiences. As curator, he will be the Mansion’s liaison with the Springfield historical community and ensure the mansion’s place among the city’s historic sites.

Blandford will lead the development of events and marketing programs to attract visitors to the mansion, which is the third oldest governor’s mansion in use today. In addition, he will manage day-to-day operations, oversee maintenance of the grounds and the facility, and manage the mansion’s workforce and volunteers.

The mansion is now being promoted as The People’s House, encouraging the public to enjoy the building and learn state history from it.

The new curator began his career in public service as a Dunn Fellow/Policy Assistant in 1999 following his graduation from Webster University in St. Louis. He worked at the Illinois Historic Preservation Agency before joining DNR. He obtained his master’s degree in history this year from the University of Illinois in Springfield.

The Policy Board of the Multi-County Narcotics Enforcement Group (MEG) has new leadership. In elections held June 12, Washington Police Department Chief Michael McCoy is president, Woodford County Sheriff Matt Smith is vice president, and Board member Bob Baietto was re-elected to serve as secretary/treasurer. The terms are for two years. MEG serves a four-county area: Woodford, Tazewell, Peoria and Knox, and several municipalities. The unit focuses on undercover drug enforcement operations. The current director, Dave Briggs, had already been granted a one-year extension on his contract at an earlier meeting of the policy board.

Unemployment down, job openings up

Unemployment in the Peoria area is down, and the number of available jobs is up, according to recently released state figures.

Data released by the Illinois Department of Employment Security says that the unemployment rate in the Peoria metropolitan area was 4.2 percent in May, down from 4.8 percent in May 2017. That means, according to a state release, 7,600 unemployed people in the region.

The rate decreased in all of the state’s metropolitan areas, year-over-year.

Job numbers also climbed, with the Peoria region seeing a net increase of 300 jobs in May 2018 compared to the same month a year ago.

The field of business and professional services saw the biggest job gains, with 1,900 new jobs in the past year. Transportation, warehousing and utilities grew by 400 jobs, while a general other services category grew by 100 jobs.

The city of Peoria will hold a fundraiser July 3 to benefit America’s Gold Star families. Sponsored by American Screenprinting and Design, donations will be collected from 9 a.m.-5 p.m. at the company’s two locations: near the corner of War Memorial Drive and Prospect and 701 Main St., #3 – Perry Side entrance. The city recently worked with America’s Gold Star Families for new banners installed on Orange Prairie Drive.

The Well Farm at Voris Field, a new urban farm in Peoria’s First District, opens to the public with a ribbon-cutting ceremony and community barbeque at 1 p.m. June 30. The farm demonstrates how urban agriculture can reduce stormwater runoff that pollutes the Illinois River, and showcases community benefits that result from green stormwater infrastructure development that reduces overflow from the city’s combined sewer system.

At the event, the public may tour the site’s water management features, which include a stormwater forest with 126 trees, a 3,000-square-foot floriculture space, and 100 raised planter beds. Together, these features will capture runoff from a 1.55-acre area, preventing an estimated 1.3 million gallons of stormwater from entering Peoria’s combined sewer system each year.

The working urban farm will produce flowers, food and timber, and provide internships and apprenticeships to youth and adults who want to learn agribusiness, hydrology, and other career skills. The Gifts in the Moment Foundation’s Urban Agriculture Apprenticeship Program will take up to 20 participants each year who will cultivate produce, cut flowers and learn how to sell their products at local farmers market.

The once-vacant property at 1013 SW Reed Ave. where The Well Farm is located was originally purchased in 1835 by brothers Francis and Samuel Voris, farmers who were attracted to Peoria by the rich agricultural soil. The urban farm’s new name, The Well Farm at Voris Field, was selected by the community to reflect the site’s history and the benefits the farm will provide.

The free ribbon-cutting celebration is an outdoor event, and will take place rain or shine.