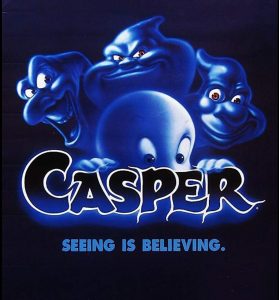 “Casper” is one of the movies being shown as part of the McClure branch of the Peoria Public Library’s Halloween in the ‘90s Movie Series. It will be shown free at 3:30 p.m. Oct. 16, at the library, 315 W. McClure Ave.

Data from a recent poll show that Illinois registered voters are angry about the state’s current deficits and want their governor to make long-term fiscal health a priority for Illinois now and in 2019. The results come from a poll that AARP commissioned.

Pollsters, Alan Newman Research, questioned registered voters ages 25 and older in Illinois in July 2018 on behalf of the AARP state office in Illinois. Most voters, across all political parties, say they are angry about the state’s current fiscal deficits and view this as the top most important issue in the state right now.

The research firm completed 1,202 telephone interviews, 600 via landline and 602 via cell phone. Data are weighted by age and gender according to the February 2018 Illinois state voter database statistics.

Voters will choose between incumbent Bruce Rauner and challenger J.B. Pritzker Nov. 6, to be governor for the next four years.

PDC recycling customers can choose to have their deposits donated to charity rather than be returned to them.

The company notified customers that the $50 deposits will be donated to Easter Seals Central Illinois with their permission.

The deposits were collected in 2010 when customers signed up to receive a cart. Those who choose to donate will become inaugural members of the Easter Seals Can-Do Crew. If residents choose a refund, the deposit will be returned by Dec. 31. If a selection is not made by Oct. 31, the money will automatically be donated.

Customers that want to make their choice of rebate or donation at the PDC website (https://www.pdcarea.com/recycle-cart-login/) are asked to input an account number. Customers who don’t have an account number on their letter should call the PDC office at 309-688-0760.

Speaker to talk about change through feminist activism

A woman will talk about her 20 years as a feminist activist in a lecture at Bradley University. Author Donna Kaz will be on campus at 7 p.m. Oct. 15 to give a lecture about her experiences with the Guerrilla Girls. The free event will be at Bradley’s Alumni Center in the Peplow Pavilion.

The Guerrilla Girls is a grassroots group of feminist, activist artists that formed in 1985 to speak out against gender and ethnic bias using humor and self-described “outrageous visuals” to make sure their message is heard. Historically, Guerrilla Girls have worn gorilla masks (hence “outrageous visuals”) and taken the names of dead female artists.

In her lecture, “Push/Pushback: 9 Steps to Make a Difference with Art and Activism,” she will draw on her experience to answer how one person can institute change by thinking and acting creatively.

The McClure branch of the Peoria Public Library is showing films as part of its Halloween in the ‘90s Movie Series.

Movies will be shown at 3:30 p.m. at the library, 315 W. McClure Ave. Admission is free. Dates for the upcoming films, their titles and plots are:

“Casper” Oct 16; A paranormal expert and his daughter bunk in an abandoned house populated by three mischievous ghosts and one friendly one.

“Halloweentown” Oct. 30; After learning she is a witch, a girl helps save a town full of other supernatural creatures.

For the first time on public display, the Peoria Riverfront Museum will present an exhibition, “The Golden Age of Disney,” as seen through Steve Spain’s collection of Disney animation celluloids and preparatory drawings. Spain, a Peoria resident, has been collecting Disney art for years. The work spans the years 1930-1960.

“The Golden Age of Disney” features the most comprehensive regional collection of Disney art from 1928-1959. This exhibition of framed preparatory drawings, celluloid and painted backgrounds examines Disney animation innovations as well as the impact of Disney on American culture.