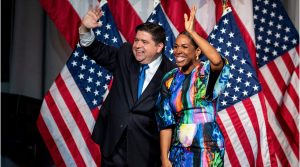 Gov.-elect J.B. Pritzker and Lt. Gov.-elect Juliana Stratton acknowledge applause on election night. Planning has begun for their inauguration, which Pritzker says he personally will pay for instead of seeking corporate sponsorship or using public money.

U of I begins major push into autonomous technology

Research into autonomous technology such as self-driving cars and robotic assistants will be the focus of a new center announced by the University of Illinois Urbana-Champaign. The university has allocated $2.1 million for the Center for Autonomy. The College of Engineering is providing another $2.1 million to recruit new robotics faculty.

The new center will play a role in designing systems that function without human intervention and will provide increased experimental space for autonomy and robotics research.

Pritzker will foot the bill for his inauguration

Gov.-elect J.B. Pritzker has formed an inaugural committee that will plan events surrounding the Jan. 14 swearing-in ceremony of himself and Lt. Gov.-elect Juliana Stratton, and the state will not have to pay for it. Pritzker said he will pay the costs.

Events will begin Jan. 12. The committee will be led by future Illinois first lady M.K. Pritzker and Bryan Echols, who serves as senior adviser to the Illinois treasurer. The executive director will be Mary Urbina-McCarthy, who was operations director for Pritzker’s campaign. The committee is made up of more than two dozen political and civic leaders. They include former Republican Gov. Jim Edgar and his wife Brenda and Chicago artist and professor Theaster Gates.

Details of the inaugural events will be put on the inauguration committee’s website, ilinauguration19.com. It will include a schedule of events and a ticket portal.

Because Pritzker will cover the cost of the inauguration, there will be no outside fundraising to underwrite costs of inauguration events. Tickets to a Jan. 14 party following the inauguration ceremony will be sold and the money donated to Cabrini Green Legal Aid, a group that helps low-income Chicagoans navigate the criminal justice system, and the Illinois Fairgrounds Foundation, which is trying to repair the crumbling fairgrounds. Tickets for the inauguration itself are free, and will be available Dec. 28.

The 2018 Peoria Art Guild Fine Art Fair took place on Sept. 28-30, on the Peoria Riverfront and featured 130 artists from all over the United States. The fair attendance was estimated at approximately 7,200 with a direct estimated economic impact of $265,722 to Peoria.

The art shows in the Art Fair Calendar survey are chosen by a nomination sent out every other year, asking art fair patrons and artists to nominate their favorite shows. Every show on the list was voted for by the people who have shopped or sold their art at these shows.

Planning of the 57th annual event, which will be held the last weekend in September 2019, has begun. Anyone interested in being on the planning committee or volunteering to work at the fair should email organizers through the website, peoriaartguild.org/contact. For more information, visit peoriaartguild.org.

Many of the hotels pictured were unique just to Peoria and are no longer standing. However, one hotel was located in the Kickapoo flatiron building, which is on the National Register of Historic Places. The building’s current tenants include Margie’s Cleaners, Thirty-Thirty Coffee Co. and upscale, industrial-styled apartments.

The calendar is available for a suggested donation of $5 at the CityLink Transit Center, 407 SW Adams, and the CityLink Administrative Office, 2105 NE Jefferson. All proceeds will be donated to the Peoria Friendship House of Christian Service.

Notices about new trash days are in the mail

Since the announcement of a new trash and recycling program made in October 2019, almost 3,000 residents have signed up for recycling carts. Cart delivery will begin this week and continue into January.

To sign up for a recycling cart, at no cost, or to learn 2019 weekly collection days and recycling schedule, visit peoriapicksup.com/ or call 309-674-5176, option 1. The Peoria Picks Up website also has information about trash, yard waste and other disposal options.