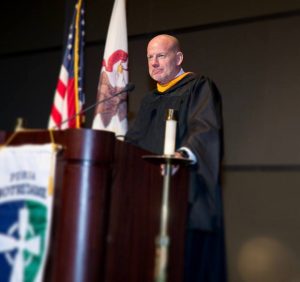 A shadow of grief has gathered over the area in the wake of the sudden and unexpected death of a celebrated Peoria school principal.

Peoria County Coroner Jamie Harwood was called to the residence, along with Peoria police, where he pronounced the 61-year-old dead at 3:31 p.m.

Harwood hasn’t released the details of Simmons’ death, but said in a press release that his cause of death is pending further investigation. However, foul play is not suspected in Simmons’ death.

Bishop Daniel R. Jenky sent a message to the Peoria Notre Dame community to express grief and announce an all-school Mass for students and staff.

“It is with great sadness that I share with the school family of Peoria Notre Dame that earlier today Principal Randy Simmons passed away,” Jenky wrote. “His sudden death brings great sadness to our students, staff, parents, and our entire PND family. I ask for your prayers for the repose of the soul of Mr. Simmons, his family, as well as our entire school community.”

At the Feb. 20 all-school Mass, Jenky called Simmons a “great leader and teacher” and said the school was elevated to a higher level of excellence under his direction.

“I believe Randy was pulled out to sea by a huge riptide,” Jenky told the congregation. “He was a strong man in many ways. In personal pain and great suffering, he could not handle the riptide.”

In 2014, Simmons was named principal of the Catholic high school, after serving as assistant principal for a year prior. Charlie Roy left to take the position of president at a California high school.

Previously, Simmons was the principal of Peoria High School, and was employed in the area as an educator for 35 years at that time.

Simmons grew up in Peoria and earned his bachelor’s and master’s degrees in education from Bradley University. He also earned a masters in athletic administration from Illinois State University. 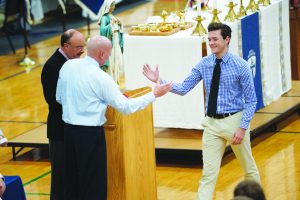 Recently, Peoria Notre Dame High School principal Randy Simmons was named Distinguished Principal of the Year by the Office of Catholic Schools for the 2018-19 school year. In January interview, Simmons told the Catholic Post, “I want to be here every day. I want to be with these kids and teachers. I don’t find reasons to miss work. I just love our kids.” (Photo courtesy of Peoria Notre Dame High School)

Along with coaching, Simmons was also an educator, and taught at Manual Academy in Peoria, his alma mater, for 15 years. He was also principal at Calvin Coolidge and Von Steuben middle schools in Peoria.

Shortly after becoming PNDH principal, Simmons was named Distinguished Principal of the Year by the Office of Catholic Schools for the 2018-19 school year.

In a Jan. 18, Catholic Post article about the award, Simmons said, “I want to be here every day. I want to be with these kids and teachers. I don’t find reasons to miss work. I just love our kids.”

In his Leadership Development class, the Post reported, Simmons said he tells the students, “You never have to work a day in your life if you’re passionate about what you do. The money comes and it goes, but if you truly love what you do, it’s not really work.”

Simmons planned to retire at the end of the school year, and Sister Sara Kowal was announced as his replacement, though he planned to continue teaching at the high school.

“He has been a gift personally to me all these years and, I know, to each one of us. I’m so grateful for the example he’s set as a leader,” Sister Kowal said in a 2014 press release when Simmons became principal. “He’s an awesome man who has served this school well.”

In that release, Simmons said, “This is a dream job. As a catholic, I am now able to lend my experience to one of the very best schools, not only in Peoria, but in the entire state of Illinois.”

An outpouring of condolences has flooded social media since Simmons’ passing. NBA player Shaun Livingston attended Peoria Central High School from 2003-04, while Simmons was principal there.

“Sad to hear about Randy Simmons,” Livingston posted to Twitter Feb. 20. “You will be missed in Peoria. One of the best principals I had! Rest easy.”

Congressman Darin LaHood posted on Twitter, “Devastated to hear that Peoria Notre Dame principal, Randy Simmons, has passed away. He had a profound impact on countless students and will be dearly missed. I join with the rest of our community in sending my sympathy to Randy’s family and will keep them and PND in my prayers.”

Compassionate messages to Simmons and his family have quickly accumulated on the educator’s Facebook page. “Mr. Simmons, you lived your life well and were a true blessing and a good example to many of who were blessed with your presence,” La Shay Brown wrote. “Mrs. Simmons, you and your family are in my prayers. Your love and support of each other is a blessing to all who have crossed your paths.”

Fr. David Richardson and Fr. Kyle Lucas are officiating, joined by The Most Reverend Bishop Daniel R. Jenky C.S.C. and other priests of the Diocese.

Simmons is survived by his wife Patti of 34 years as well as three children; Nate (Tina) Simmons of Peoria, Ariz., Kate (Chad) Smith and Sarah Simmons all of Charleston, S.C., and two grandchildren.

In addition, Simmons is survived by two brothers, Mike (Bella) Simmons and Doug (Lori) Simmons all of Peoria, and one sister, Kathy Simmons of San Francisco.