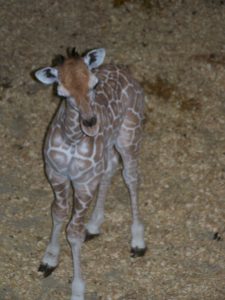 People will have an opportunity to name the Peoria Zoo’s new baby giraffe, which was born Jan. 7. (Photo by Tim Alexander/for Chronicle Media)

The impact of the recent birth of a baby female giraffe at the Peoria Zoo will be felt around the world.

The public is invited to vote for their favorite of six possible names for the baby giraffe —who entered the world on Jan. 7 at 5 feet 10, 120 pounds — for $1 per vote. In addition to helping pay for toys and other items for the zoo’s growing giraffe population of four, proceeds from the voting will help support the Giraffe Conservation Fund.

“Giraffes used to be very common throughout Africa, and now they are not,” said Yvonne Strode, Peoria Zoo director, during a recent media meet-and-greet day for the baby giraffe. “They have recently been listed as a vulnerable species. They have lost so much of their habitat.”

According to the International Union for Conservation of Nature, there are just 80,000 giraffes roaming the African continent, a 40 percent loss from 1999’s estimated population of 140,000 giraffes. The Peoria Zoo’s reticulated, or Somali giraffes, are estimated to have a population of around 4,700, a staggering reduction from the 31,000 believed to exist in 1999.

Names under consideration for the baby giraffe are Farah (Arabic for joy), Fern (symbolizes sincerity toward others), Layla (Arabic for born at night), Sophie (for a popular giraffe baby teether for human babies), Twiggy (“Twiga” is Swahili for giraffe), and Zara (Arabic for princess). Votes can be placed on the Peoria Zoo website through Feb. 26, with the winning moniker unveiled at the zoo March 1.

Each $1 entry will be placed into a drawing for a private meet and greet for the winner and up to five guests, during which the baby and mother, Vivian, can be visited in the zoo’s heated winter giraffe barn.

During a recent media visit, the baby bounced between shy and inquisitive, displaying little interest in this reporter’s presence and staying close to mother’s side. Such was not the case earlier that day in front of a local television news crew, when the baby pranced and galloped with near-reckless abandon for the camera.

The female baby giraffe will likely stay with the Peoria Zoo for several years, unlike her year-older male brother, Finely, who is likely destined for new environs sooner rather than later.

“In the wild, female babies (also known as calves) will stay with the herd. There is only one male giraffe in a herd; the rest are driven out,” Strode said. “That’s why Finely will probably be relocated elsewhere before Dad (Taji) begins to regard him as a real competitor.” 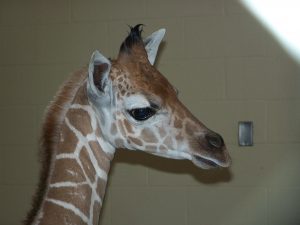 The new giraffe born Jan. 7 at the Peoria Zoo. (Photo by Tim Alexander / for Chronicle Media)

The zoo hadn’t planned on breeding another giraffe so soon after the July 25, 2016 birth of Finely. Strode said the surprise birth, which came after a 465-day gestation period, can be credited to an experimental contraceptive veterinarians administered to Vivian.

“We now must consider that experiment a failure,” Strode chuckled. “If every zoo had a baby giraffe every 15 months, there would be nowhere to put them all. (Giraffe births) are very tightly controlled, but as in the human world, things like this happen.”

This is not to say the baby’s birth was unwelcome by zoo staff and its family. While the baby and mother are currently isolated behind chain-link fence from her brother, Taji, and the nonrelated Emy, signs of curiosity and familial affection are commonly expressed by Finely, according to Strode.

“Finely is a little jealous because of all the attention the baby is getting, but sometimes they can be seen licking one another through the fence,” she said.

The public will be allowed to view the baby giraffe beginning Feb. 1, when cardboard covering windows in the giraffe enclosure will be removed. By the time the weather warms, the baby, along with the rest of the zoo’s giraffe herd, will be moved to their regular outdoor environment.

Go to www.peoriazoo.org to vote for your favorite baby giraffe name and help support giraffe conservation in Africa.