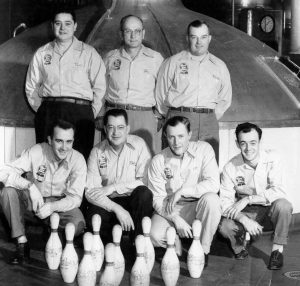 A group hoping to preserve the history of Peoria Heights is asking the public to search their basements, closets and attics for forgotten items that might help tell the story of the village and the people who’ve lived there.

“It’s easy to get facts and figures, but we need to tell the story and the character of the community. There’s a fierce loyalty among the folks who have lived there, some of them for generations,” said local author Monica Vest Wheeler, who’s leading the project.

Among items the historians are looking for are photographs, audio cassettes of family interviews, home movies, written materials and documents. Two collection days were held in December, during which people were encouraged to bring in any items related to Peoria Heights, and two more are scheduled from 10 a.m. to 2 p.m. Jan. 23 and 3 to 7 p.m. Jan. 28 at the Betty Jayne Brimmer Center for the Performing Arts, 1327 E. Kelly Ave., Peoria Heights.

“The first (collection day) was kind of slow, but we got some really good stuff,” Vest Wheeler said. “One woman had a photo of a woman in a long dress driving a Duryea. I’ve never seen a woman at the wheel of a Duryea. We don’t think the photo was taken in Peoria Heights, but the Duryea came from Peoria Heights.”

The Duryea was one of the earliest automobiles, which Charles Duryea first built while living in Peoria Heights in 1898.

“Some people might think they don’t have anything that we can use, but if you have a box of photos at home, just bring it in,” Vest Wheeler said. “You may think it has no significance, but it may show a neighborhood in the background or a play at the school; the interiors and exteriors of buildings that are no longer there; businesses that were there for a long time and have gone.” 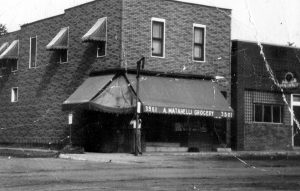 The old Matarelli Grocery store on Prospect Road in Peoria Heights was just one of many businesses that have come and gone over the years in the Peoria County village. A group of local historians is seeking photos and stories about Peoria Heights’ history for a book and other projects. (Photo courtesy of Monica Vest Wheeler)

She asks people to bring original photos that she can scan at the collection days. She’s also looking for physical items and memorabilia, such as letters and postcards, old report cards, business ads, bills, pay stubs, tickets to the old Crest Theatre or other places and events that can be scanned.

The former weekly newspaper reporter and editor is hoping to set up personal interviews with people who hold memories that tell the story of Peoria Heights.

“I can do even do FaceTime interviews with folks if I can’t physically get to them,” Vest Wheeler said.

She had actually started gathering Peoria Heights’ history on her own about 10 years ago, interviewing about 30 residents, some of whom have since passed away, and scanning hundreds of photographs with the thought of writing a book, before she put the project on a shelf.

Vest Wheeler has researched and written about 10 books relating to Peoria-area history but has spent more time in recent years writing books and speaking about coping with the emotional and physical daily challenges of Alzheimer’s, stroke, brain injury and brain tumors, among other topics.

“Recently, there was an interest by a small group of people to do a Peoria Heights history project, and they contacted me because they remembered I had worked on it before,” she said. “I kind of stepped back from Peoria history for about a decade, but now I’m back into it again.”

A native of Anderson, Ind., Vest Wheeler moved to Peoria with her husband, Roger, in 1979. She thinks of history projects as a wake-up call.

“Sometimes Peoria has a pity-party attitude. I say that in a loving way because I’ve lived here for 40 years,” she said. “History is one of the best cheerleaders we can have for a community. If we don’t understand our history, how are we supposed to be better? We need stories about our humanity, because there are too many things out there about our inhumanity right now.”

Her personal hope is to show that Peoria Heights is more than just the things it’s primarily known for: Grand View Drive, which President Theodore Roosevelt famously referred to as “the world’s most beautiful drive” in 1910; the old Pabst Blue Ribbon brewery; and Tower Park with its 200-foot water tower featuring three observation decks.

“We want to show that there’s a real heritage and a heartbeat of the community,” Vest Wheeler said. 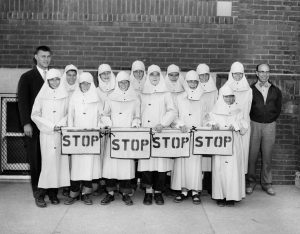 A group of boys who served as crossing guards at Peoria Heights Grade School sported new raincoats while standing with teacher and patrol boy sponsor Lyle Vice (left) and Dick Doyle (right), a former Peoria Heights Grade School Board of Education member, in this old photo that’s among pictures and memorabilia being gathered by local author Monica Vest Wheeler and a group of people interested in preserving the history of the village and the people who’ve lived there. (Photo courtesy of Monica Vest Wheeler)

“I’ve had adults tell me stories about how life was built around the Pabst plant when they were growing up. They knew when the whistle blew at certain times, it was time to head home,” she added. “Someone else told me they have found the old Gibson’s Pathway that used to go from the top of Grand View Drive all the way down to Al Fresco Park. These are the stories we need to hear.”

She’s specifically looking for photos that show the demolition of Al Fresco Park. “You know there have to be some out there,” she said.

While no timeline has been set for the Peoria Heights history project, it will likely include a book and an online presence. “We’re looking at creating a lot of different things, and that’s what we’re still trying to figure out here,” Vest Wheeler said.

More information about the upcoming collection days will be posted on the website www.historyoftheheights.com and on the Facebook page www.facebook.com/pg/realizingtheheights/. Vest Wheeler is also hoping to schedule open forums for brainstorming memories.

“We all have bad memories, but it’s the good stuff that is sparked when you do this kind of project,” she said.

Anyone who can’t make it to a collection day can email stories, photos or offers for interviews to heightshistoryproject@gmail.com.