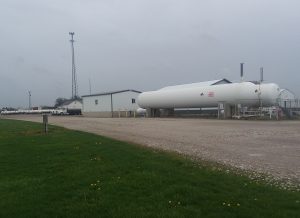 Propane and anhydrous ammonia storage tanks at the Ag-Land FS, Inc. location at in Tremont look similar, as to most similar tanks. Manito Transit, a subsidiary of Growmark, mistakenly filled a main Agland FS propane storage tank with anhydrous ammonia, causing 150 customers to receive fertilizer rather than fuel. The tanks are currently being replaced. (Photo by Holly Eitenmiller / for Chronicle Media)

An error on behalf of a farm chemical supplier left 150 local propane customers with tanks loaded with anhydrous ammonia.

In April, Manito Transit, a subsidiary of Growmark, Inc., filled an Ag-Land, FS main propane storage tank with anhydrous ammonia, then failed to inform the company of the mistake for several weeks. The incident occurred at the Green Valley Ag-Land, Inc. Facility on Railroad Street.

Farmers apply the nitrogen fertilizer to crops in spring and fall, and the Manito Transit employee may have mistakenly accessed the anhydrous ammonia by course of habit. Propane tanks and anhydrous ammonia tanks tend to look similar.

Heller said the anhydrous ammonia was distributed to customers for around two weeks before the error was brought to the company’s attention.

“We were in the anhydrous season in late March, so someone mistakenly hooked up to the LP tank in Green Valley and didn’t tell anybody for a couple of weeks,” he explained.

News of the mistake alarmed customers, and Patti Kaeb of Peoria posted a request to Facebook, asking other customers to engage in a discussion about the matter. Kaeb’s tank was one of those refilled with anhydrous ammonia.

“I was wanting to get a group together that have been affected by this to talk about it and bounce ideas off each other and see how they felt about it,” she said.

Anhydrous ammonia is denser than propane, however, and tends to remain at the bottom of LP tanks, particularly if there is any propane in the tank. It is extremely corrosive to brass and copper.

Heller said a third-party HVAC company is replacing all copper and brass fixtures that have been damaged by exposure to anhydrous ammonia, and, in the meantime, Ag-Land FS workers have replaced about 60 percent of the tanks that were mistakenly filled with the wrong chemical.

The Tremont Ag-Land FS office sent letters to all who were effected, and many customers have been provided with temporary tanks that have exposed lines running directly to the homes. It’s an inconvenience for which Heller is apologetic.

“I know it’s an inconvenience for people with temporary lines across the yard, and that would drive me crazy,” Heller said. “It just takes so much man power to change out the tanks and we only have so many hours per day

Most of those tanks are 500 gallons, a and a few are 1,000-gallon tanks. Heller said workers from other Ag-Land FS offices have joined in to help replace the tanks, and all of them should be replaced before the end of May. Manito Transit, Heller said, is responsible for all insurance claims. Only one person has responded with a complaint of a headache.