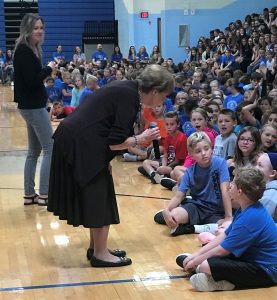 Holocaust survivor Marion Blumenthal Lazan shares her story with students at Washington Intermediate Grade School in Washington Sept. 5. Lazan was 10 when her family was liberated by Russians from a death train on the eve of Germany’s surrender in 1945. Her generation will be the last to tell, first hand, their stories of hardship and survival. (Photo courtesy of Lori Cunningham)

A bitter truth rests within every significant historical event; there is only a small window of time before the generation who experienced it passes on, leaving others to tell their tales.

On Dec. 20, 70 years after she and her family were freed from Nazi concentration camp, Bergen-Belsen, Marion Blumenthal Lazan will turn 84. Her earliest childhood memories, as told in her book, “Four Perfect Pebbles”, begin with the rise of the Nazi regime and the genocide that ensued.

In early September, Lazan visited Washington Middle and Intermediate schools to share her story of loss and survival with students and parents.

“These young people must be a witness when we aren’t here any longer,” Lazan said of the dwindling number of Holocaust survivors. “They have to bear witness and the Holocaust must be taught, studied and kept alive. Only then can we guard it from ever happening again.”

After a speaking engagement in 1994, author Lila Perl suggested Lazan write a book. Together, with the help of Lazan’s mother, Ruth Blumenthal, they penned “Four Perfect Pebbles”. Published in 1996, the book is in its 29th printing, and may be found in several languages, including German, Dutch, Hebrew, Japanese.

“Lila Perl was a very accomplished author. Her brother won the Nobel Prize in Physics in 1995,” Lazan said. “My story is woven into the history of the second World War and it’s something youths can identify with and research.”

Unlike Elie Weisel’s “Night”, a gut-wrenching account of the Holocaust, Lazan’s book takes a gentler view in order to reach and educate a younger audience. Still, it is inevitably painful.

From 1933, when the Nazis began operating its first concentration camp northeast of Dachau, Germany, until early 1938, the Blumenthals remained in their small village of Hoya to care for her grandparents until they passed away that year. 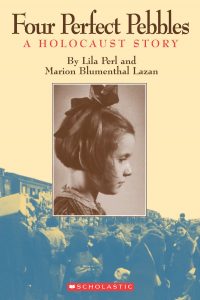 In 1994, Marion Blumenthal Lazan paired with writer Lila Perl to write and publish “Four Perfect Pebbles”, the story of Lazan’s long journey as a Jewish child during the Nazi occupation of Europe. Lazan’s book, aimed at young readers, recently celebrated its 20thanniversary in print. (Photo courtesy of Marion Blumenthal Lazan)

Like many Jews, they then tried to escape to the United States; attempts that were repeatedly thwarted. In January 1939, she and her elder brother Albert and her parents, Walter and Ruth, arrived in Rotterdam, Holland with only a pocketful of money and a meager few personal possessions.

Within a year, the family was shuttled to Westerbork, a Dutch refugee camp in northeastern Holland, where they were granted an American visa. They would depart for the United States in March 1940, a trip that became delayed until June of that year.

By mid-May, however, the Nazis invaded and began occupying Holland. The Blumenthals, and all Jews at Westerbork and other camps, lost all hopes of freedom and would endure five more years of ever-worsening famine, disease and unimaginable brutality.

“It’s a mindset you’ll never understand. Germany was one of the most cultured nations in the world, but what they did to men women children, babies … to twins,” Lazan said. “These men and women (who ran the camps) went home in the evening like it was a 9-5 job.”

After four years at Westerbork, the Blumenthals were shuttled to Bergen-Belsen, the concentration camp where Anne Frank died.  Had she lived, Lazan said, Frank’s story would have been much like her own.

“All I could see, as I stepped down onto the ground, were the tall, shiny black boots of the S.S. officers and their dogs — huge, restless and mean-looking,” Lazan wrote. “I was 9 years old, and small for my age. The jaws and fanged teeth of the barking and leaping police dogs were exactly at my eye level … I was very, very frightened.”

Lazan soon began a routine; if she could find four perfect pebbles, it would keep her family together and alive. It was a ritual she repeated countless times during the dismal days at Bergen-Belsen death camp.

Separated from her father and brother, Lazan clung to her mother as typhus, starvation and Nazi brutality ravaged the camp. When someone escaped, or committed suicide, punishment ensued. Lazan said prisoners were often forced to stand, unmoving, at roll call, without food or water, enduring harsh weather in ragged clothing, sometimes until nightfall. 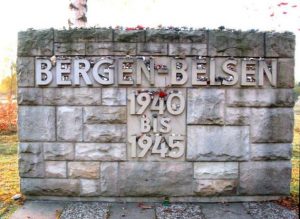 Though there were no gas chambers at Bergen-Belsen Nazi concentration camp, more than 50,000 people died there of disease, starvation and brutal medical experiments from 1940-45. Marion Blumenthal Lazan, her mother Ruth, father Walter and brother Albert, barely survived the Holocaust, though her father died of typhus weeks after their liberation by Russian soldiers in April 1945. (Photo for United States Holocaust Memorial Museum)

On April 9, 1945, on the eve of German surrender, the prisoners were herded into the cars of a “death train” to be slaughtered, but the train never arrived at its destination. In the early morning hours of April 23, after many of the passengers died of disease and starvation, the survivors were liberated by Russian soldiers on Poland’s border.

“We were so ill and weak, skeletons, all of us, that we hardly realized what was happening,” Lazan wrote. “We knew then that after six-and-a-half years this was the day of our liberation from the Nazis.”

Lazan was 10 then, and weighed 35 pounds. Her family survived, but, despite food and medical care provided by the Russians, her father passed away three weeks later of typhus. Ten years after their American visa was issued, the Blumenthal family arrived in New York aboard the S.S. Veendam without Walter.

“The date of our landing was April 23, 1948. By coincidence, it was exactly three years to the day since we had been liberated from the death train by the Russians,” she wrote.

In June of that year, the Blumenthals arrived in Peoria, joining a large contingency of Jewish refugees who were offered housing there.

At 13, Lazan was placed in fourth grade due to language barriers, but, in 1953, graduated eighth in her class of 265 students at Peoria Central High School.

That summer, in New York, she married Bradley University student Nathaniel Lazan, whom she met a few years earlier. They remained in New York, but Lazan still maintains close ties with families she knew in Peoria, such as the Grimmingers, who remained in Peoria.

Lazan’s generation will be the last to tell, first hand, their stories of hardship and survival. She believes visiting schools is important so this history is not overlooked by future generations, set aside on a shelf.

“When I speak to our young people, the lessons learned from this dark period in our history is something we all need,” Lazan said.