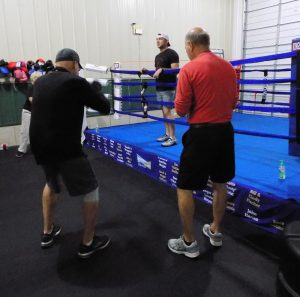 Rocky Steady Boxing of Peoria founder Dorian Mosack motivates Parkinson’s Boxers with a mixture of humor and military discipline. “He’s strict with everyone,” Gladys Schmidt, whose husband is a member, said. “He knows what it takes to fight this disease and he cares about all of the members here.” (Photo by Holly Eaton/for Chronicle Media)

It’s about 11 a.m. on a Thursday, and Dorian Mosack barks out orders to a group of about 25 Parkinson’s Disease patients who have gathered around him in a circle.

“Rotate your hips. And Syd, make sure you aren’t making improper eye contact with anyone. We’ve had complaints,” he quips, and everyone laughs.

An Army veteran, Mosack served in the 82nd Airborn Division, was a Jumpmaster who served back-to-back deployments to Afghanistan and Iran.

“It’s a family here, a social group. People here really love and care about each other and support each other,” Gladys Schmidt said. “John doesn’t ever want to miss a class.”

Two years ago, John Schmidt’s battle against Parkinson’s Disease began. Since then, he and his wife make frequent trips from their Princeton home to physicians in Chicago, OSF’s Parkinson’s and Movement Disorders Clinic and to the Rock Steady Boxing club.

“It’s a 50-mile trip to Rock Steady and we make it three times a week,” Gladys said. “It’s part of the Big and Loud Program, and he’s supposed to do the workout at home, but he’d rather come here.”

The Schmidt’s log 300 miles each week to visit the Peoria Heights club, as part of a compulsory fitness plan that helps Parkinson’s patients with range of motion, flexibility, posture and gait. Parkinson’s is a degenerative disorder that results in loss of motor skills, which causes stiffness, tremors, imbalance in movement and difficulty speaking.

According to the Parkinson’s Disease Foundation, more than 1 million people in the United States have Parkinson’s, and more than 60,000 people are diagnosed with the disease each year. In the 1990s, studies supported the suggestion that rigorous exercise favorably impacted symptoms of the disease. 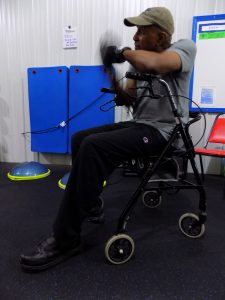 John Wysinger of Peoria throws a punch during a group workout session at Rock Steady Boxing in Peoria Heights. The program offers training that meets the fitness levels of all stages of Parkinson’s Disease, and emphasizes gross motor movement, balance, core strength and flexibility. (Photo by Holly Eaton/for Chronicle Media)

Syd “Syd Vicious” Buell became a Rock Steady member three years ago, and said boxing has helped stave off her Parkinson’s symptoms, which, for women, she said, take a particular toll on feelings of self-worth.

“It affects women differently, mentally. We get up, do our makeup, comb our hair,” Buell explained. “It’s depressing when you can’t do that anymore. Can’t button your blouse, put on mascara. When you don’t look good, you don’t feel good.”

When she began boxing, Buell said she noticed the number of male members far exceeded those in the “Estrogen group”. The number of lady boxers has grown, she said, but men still outnumber the women.

“This place has helped me so much mentally. Everyone here is in the same boat. We all have the same affliction,” she said. “When you come here, people ask how you are, how your family is, and they really mean it. We have parties and picnics. We’re a family.”

Parkinson’s spouses, Schmidt said, make up 90 percent of all caregivers. “I’m mowing the lawn now, and doing all the things John can’t do because he’s focused 24-7 on the disease,” she said.

Rock Steady spouses and volunteers are cheerleaders, she said. They help members put on boxing gloves, they spar with them and spot them to help with balance. Sometimes they are the voices for those who can hardly speak. Other times, they simply sit back and coach them.

“I’ve seen so much progress. So many people come in assisted with a cane, and after awhile, they only need a helping hand,” Schmidt said. “And it’s not an ‘old person’s disease’. It can happen to anyone.”

Germantown Hills boxer Katie Kleist was diagnosed with the disease when she was 20. At 36, Kleist is married to her college sweatheart, is the mother of two sons and is an active participant in Rock Steady.

While she was pregnant, Kleist declined her Parkinson’s medication and began using a walker. Since joining Rock Steady, she’s put away the walker, can walk backwards on a 2×4 board and jumps rope at ever-increasing counts. 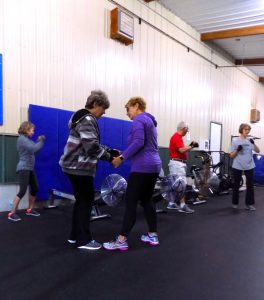 The need for volunteers grows as membership at Rock Steady Boxing in Peoria Heights continues to increase. The program was developed for people fighting Parkinson’s Disease, and volunteers partner with members to help them maintain balance, tie on boxing gloves, spar with them and motivate them. (Photo by Holly Eaton/for Chronicle Media)

“I’ve gained the confidence I need to fight against my symptoms,” she said. “I am excited and look forward to going to classes, because I’ve learned it helps me to feel better and fends off my symptoms. It’s my breath of fresh air, a place I go to and truly feel that everyone understands what these symptoms feel like. They understand my daily struggles.”

Those struggles Mosack readily addresses in each class.

“Those support groups at OSF are great and the research is great, but you have work to do,” he told them as they stretched.

The stretching, the daily “shout-outs”, the sparring and boxing, all are designed to address Parkinson’s symptoms. Being loud helps exercise weakening vocal chords. The boxing stance helps steady a shaky balance. Sparring and punching bag sessions keep limbs from tightening up.

The Thursday class of 25 is rather small, compared to other sessions, which are held Monday through Thursday, with limited-basis classes on Saturdays. Open gym sessions are available every day but Sunday.

Rocky Steady Boxing classes are held next door to Mosack’s CrossFit 309 studio, at 2659 N. Galena Road. For more information on attending classes or volunteering, visit the studio’s Facebook page, “Rock Steady Boxing Peoria,” or go to its website at https://www.crossfit309.com/rocksteady.